Toolbox 2 – Focusing on individuals and communities

Combining attention to the individual and community levels is a central element of bottom-up social development in the favelas. Contrary to most social movements that focus only on societal development, the grassroots organisations of the favelas pay attention to each individual life and work, strengthening the self and its competencies. Community change requires people who think of themselves as agents and protagonists of their own lives.

Toolbox 2 – Focusing on individuals and communities

This tool is about structures of support that help people to learn, grow and develop their lives. To understand this, we need to think about scaffoldings on a construction site: they help to sustain and support the structure of buildings so that they can stand and be built upon.

Psychosocial scaffoldings are actions and structures that support development at the individual and social levels. They refer to the central role of supportive people and institutions in the healthy development of human beings. Scaffolding as a metaphor for describing psychological structures of support goes back to psychologists Lev Vygotsky and Jerome Bruner. They showed that human beings need other people and society’s support to grow and fully realise their human potential. Scaffolding is an action between people; the support given by more experienced caretakers or peers acts as a springboard that provides emotional sustenance and takes people forward.

Many psychologists used to think that that this support was provided only by the family and that it worked mainly in the early years of life. However, more recent research has found that psychosocial scaffoldings can be provided by manifold support institutions, work throughout the life span and play a crucial role in fighting marginalisation and exclusion.

Supporting a child, a young person or indeed any adult from a position of care, be it interpersonal or institutional, produces positive specific individual developmental changes and can lead to processes of development at the community level.

In practical terms, psychosocial scaffoldings need two actions: holding and handling. These two complementary processes were identified by British psychoanalyst Donald W. Winnicott and refer to the ways in which a caretaker (usually a mother) provides unconditional love to her baby and at the same time teaches rules and restrictions. This combination of love and rules enables the growing child to relate to the world in a socially competent and healthy way.

Holding comes first. The caretaker gives the baby love and reliable, careful supply for its needs, from feeding to reassurance and physical comfort. In holding, giving is unconditional.

Handling comes after or with holding. The caretaker gradually, and with loving care, sets rules and boundaries for the child. From handling, the child learns that she is part of a larger social world: she is a person capable of doing things on her own, but also must respect rules and accept the rights of others.

Psychosocial scaffoldings help individuals exposed to difficult life conditions to develop trust and reliance on themselves and the social world. It is the basis for self-esteem, citizenship and the ability to work with others for transforming their reality.

Key facts from the favelas

Psychosocial scaffoldings are a widely utilised tool in bottom-up social development in favela contexts. Grassroots organisations such as AfroReggae and CUFA use holding and handling on a regular basis through relational strategies and interventions: 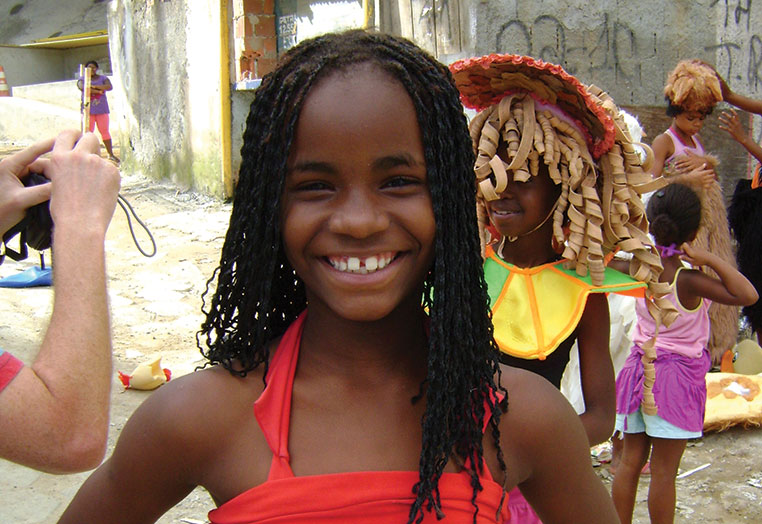 This is a programme implemented by AfroReggae, across different projects. As a rule, participants of all projects generally receive some kind of material incentives in the form of food, trips and leisure activities. In addition, participants who fulfil eligibility criteria (not all project participants are eligible) receive a monthly stipend. This cash transfer is conditional upon continued attendance at school and has the objective of supporting young people in their involvement in arts and sports.

The scholarships programme allows participants to be ‘held’:

At the same time, scholarship holders are ‘handled’:

Sustained involvement in sports and the arts gives participants life structure: they must attend school at a given time, do their homework and study (to progress in school), save time for the arts/sports course and schedule rehearsals, performances and/or matches. This, for a youth, is a busy life that, in the words of participants, serves to keep them focused on productive activities rather than on a lifestyle characterised by idleness or crime.

LIIBRA (and sports in general)

Street basketball is a sport that was developed in Brazilian favelas and promoted by CUFA. It started freely in the streets and is now widely practised, and has its own national championship. The first edition of the rules for the game (Athayde, 2008) expresses the combination of creativity in approaching it and, simultaneously, the restrictions applied to it: “ball juggling and tricks of all kinds are allowed …   the player can walk or even run with the ball … this dispensation, however, does not allow the player to step on [another player]” (2008: 33).

In outlining “the rules and tricks of urban basketball” (2008: 87), social development activists exemplify the process of holding/handling. They provide an organised, safe ground in which players can express themselves, their physicality and their drive in a collective, concerted endeavour. At the same time, they set the boundaries of what is and is not allowed in the pursuit of the players’ objectives. The simultaneous use of “tricks” and “rules” helps to raise awareness that, even in contexts of ludic engagement, there are limits to our behaviour. These lessons can in turn be transferred to other contexts of participants’ lives.

Holding/handling activities are those in which an identifiable person or institutional figure (coach, teacher, or activities coordinator) provides support and sets behavioural limits to participants.

First, participants receive support in various forms. Examples include new knowledge and skills and having a space of care and containment for self-expression. Second, while these activities need to be flexible to cater for people who may have experienced hardship (broken families, inconsistent schooling and lack of trusted authority figures), they also implement rules and set boundaries on culturally acceptable social behaviour, such as listening to others and taking-turns to speak.

As in the example of LIIBRA and scholarships, there are concrete initiatives that can combine holding/handling. Here you will find a number of Action points for each process:

This tool focuses on individuals’ sense of worth and the role played by social networks in enhancing how they think about themselves and what they do.

Self-esteem and social networks are interconnected. The notion people have of who they are is tightly related to their community and the networks to which they have access. They draw on these to understand themselves and to build self-esteem – that is, the value a person gives to herself.

The range and quality of networks people have can boost or undermine their sense of worth. In contexts of hardship and lack of opportunities, the ideas that people have of themselves and what they can achieve can be seriously undermined. Access to other parts of the city and, if possible, the world, allows people to be exposed to more experiences, people and knowledge, and to have wider networks of acquaintances and friends (people who can support them at any given time).

When we have access to different places and a diversity of contacts with other people, the opportunities to experience varied situations and to imagine different worlds are greater. Enabling freedom of movement in the city (and the world) broadens the horizons of community members and has an impact on the positive development of the person and on the expansion of her networks.

The more places and people we know, the greater our chances of expanding our identity and our sense of who we are and what we can do. This enhances our chances of coping with adversity, empowers us psychologically and socially, opens up horizons, and creates voice, dreams and thinking. All of these contribute for social protagonism and agency.

Key facts from the favelas

Favela organisations actively use the expansion of networks as a tool for boosting self-esteem and the sense of individual worth of favela dwellers. They build partnerships and networks at local, national and global levels using social media, cultural exchange, and their own artistic and territorial expertise. This takes the identities and culture of the favela to other contexts and worlds and provides community members with a platform for self-exposure and recognition.

The following are examples of actions that take place in the favelas:

Favela to the world

This project was developed by AfroReggae with the goal of taking a local project, Escolando a Galera [Schooling the gang] for an exchange with students of London’s Barbican Centre. This is a prime example of expanding the networks and horizons of community members.

AfroReggae implemented this action in the following ways:

Favela dwellers who have travelled overseas through AfroReggae, or know someone who has done so, narrated these experiences in awe. Travelling and exposing themselves to a new culture opens the professional and cultural horizons of favela dwellers and reinforces their entitlement to dream, to have hope and to work hard for a future that is realisable.

This is one of CUFA’s programmes especially targeted to black women. This intervention implements a multi-method approach which aims to generate reflection and expansion of beauty standards, to train users in a trade and ultimately to bolster their self-esteem as a result. This project includes two main streams:

These two streams complement each other in encouraging participants to think critically about who they are, their community (how they fit in relation to other black, like-minded women) and the society at large (how their physical characteristics relate to the standards of beauty, and possibilities to offset them). A critical understanding of their reality and engagement with other stories and networks strengthens self-esteem.

Self-esteem and networks in action

Actions for self-esteem and the expansion of networks seek to provide opportunities for members of the community to interact in other contexts. They give users knowledge, connections and access to the material resources of institutions, communities and agents that they would otherwise not have access to on their own.

Actions that expand networks can be pursued by grassroots organisations individually or in partnership with other institutions.

Actions that develop self-esteem and expand networks are at the heart of social development initiatives because they combine a focus on the individual with an emphasis on the relationships, links and networks of a community. 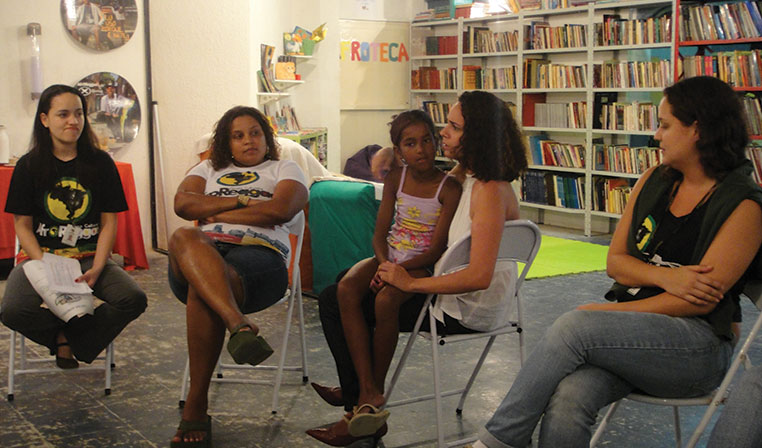