Africa and China – Can China master the balancing act needed to straddle tensions in the Sudans?

Africa and China – Can China master the balancing act needed to straddle tensions in the Sudans?

LSE’s Laura Barber looks at how China has been forced to adapt its “non-interference” policy in its dealings with Sudan and South Sudan.

After Africa’s longest civil war ended with the signing of a Comprehensive Peace Agreement (CPA) between North and South Sudan, South Sudan gained its formal independence from the North in July 2011.

The governments of Sudan and South Sudan have since been unable to make progress on several outstanding issues that peace deals and the official break up failed to fully address; namely border demarcation, the status of the disputed area of Abyei, and oil transit fees that the land-locked South must pay Khartoum for use of its oil infrastructure in the North.

The African Union High-Level Implementation Panel (AUHIP)-facilitated negotiations which aim to resolve these issues were recently restarted in Addis Ababa. However, at the time of writing, talks between both sides have collapsed, with South Sudan announcing plans to halt oil production within two weeks in response to Sudan’s unilateral seizing of southern crude oil worth US$350 in compensation for unpaid transit fees.

China’s foreign ministry spokesperson has joined other members of the international community in expressing concerns over the recent deterioration in relations, urging the two sides to stay calm and exercise restraint.

For China, however, the failure of both sides to reach an agreement has a direct impact on its economic interests in both countries, which together rank as the seventh-largest supplier of crude oil to China, accounting for 5 percent of its imports in 2011.

I will describe the evolution of China’s relations with both Sudan and South Sudan with a view to identifying current and future trends as Beijing attempts to balance its relations between the two.

Diplomatic ties
Since diplomatic ties with Sudan were established in 1956, China has sustained good relations with successive governments in Khartoum.

China’s role in the country did not become significant, however, until the mid-1990s when Chinese investment in Sudan’s fledgling oil industry became a prominent feature of the relationship.

Mutual interest forged the strengthening of ties between Beijing and Khartoum. In the context of the ruling National Islamist Front’s (now National Congress Party) international isolation following its designation by the US as a ‘state sponsor of terrorism’ and the imposition of UN sanctions, President Al-Bashir sought Chinese investment in oil production that would come with “no strings attached”.

With China becoming a net importer of oil in 1993, such a project was in keeping with the goal of Chinese oil companies to invest in locations where Western competition was absent.

China’s strategy of developing a state-supported economic engagement underpinned by the principle of ‘non-interference’, which pre-dated the official proclamation by the Chinese government of an official “going out” policy in the late 1990s, was viewed as a success by Beijing and Khartoum’s elites.

Since 1999, when the Greater Nile Petroleum Operating Company (the consortium in which the state-owned China National Petroleum Company (CNPC) is the largest stakeholder) completed a pipeline connecting the oilfield to the Port of Sudan in the north, Sudan’s oil production has risen from near zero to more than 500,000 barrels per day.

Such a positive view of China’s deepening role in oil development was not, however, shared in Khartoum’s periphery.

As with other foreign oil companies operating in Sudan at the time, CNPC inevitably became inserted into an existing political economy of oil extraction linked to a protracted civil war with the South, whereby Khartoum and its local proxies displaced civilians from their land to ensure central government control of oil development.

Far from enacting a policy of ‘non-interference’ in Sudan’s internal affairs, the Southern rebels, the Sudan People’s Liberation Army (SPLA), viewed China’s role in terms of its direct support for the central state, and its oil facilities became direct targets of SPLA attacks from the late 1990s[1].

Unlike the US company Chevron, which had abandoned its operations in 1984 as a result of the insecurity wrought by civil war, China continued to invest in package deals, whereby it provided infrastructure projects and arms sales in return for access to oil, winning CNPC a further stake (43%) in the Petrodar consortium in the Upper Nile. China soon became Sudan’s top source of imports and top recipient of its exports.

It was not until after the signing of the Comprehensive Peace Agreement (CPA) in 2005, that the constraints of adhering to a strict policy of respecting formal state sovereignty and non-interference revealed China’s limited room to manoeuvre in the context of Sudan’s rapidly shifting political dynamics.

The agreement brought with it a host of new issues, particularly regarding oil revenue sharing. Moreover, although the CPA encouraged all actors to make ‘unity attractive’, it stipulated that the South would hold a referendum on independence in 2011.

Following the death of the SPLA/M leader John Garang, who had long promoted the notion of a united and secular ‘New Sudan’, in 2006, the desire to obtain independence gained momentum in the South.

According to official rhetoric at the time, China supported the unity of Sudan according to the principles outlined in the CPA, and in accordance with China’s position on respect for Sudan’s sovereignty. With its Tibet and Xinjiang issues at home, China was eager to support the preservation of multi-ethnic regimes.

However, facing the reality of the South’s uncertain future and the impact this may have on its oil investments, Beijing sought to maintain its relationship with the ruling elites in Khartoum, while hedging against future shifts in power, or the break up of the country.

The formal incorporation of the SPLM into the central Government of National Unity (“one Sudan, two systems”) had enabled Beijing to politically and legally engage with the South[2].

However, in shifting its previously unwavering support for the ruling NCP elites in Khartoum, China demonstrated the flexibility of its foreign policy principles in practice when faced with pragmatic considerations and the imperatives of investment protection.

With the secession of the South becoming an immanent reality in the lead up to the referendum on independence in January 2011, China’s rhetoric shifted to that of respecting the desire of the people of the South and the outcome of the referendum.

Beijing’s concern about maintaining stability during the referendum process was also expressed in its deployment of election monitors.

However, in practice, with the bulk of its oil investments straddling the insecure border regions now under the control of the Government of South Sudan (GOSS), which continues to rely on Sudan for oil transportation, China still faces the difficult task of balancing its relations with the two neighbours.

Following the failure of both parties to reach an agreement on the latter issue at the AUHIP-facilitated negotiations held in Addis Ababa last November, Beijing dispatched its Special Envoy, Liu Guijin, to both Juba and Khartoum to mediate in the dispute in an effort to keep the oil flowing.

Regarding the recent deterioration in relations, China is likely to continue to play an active mediation role, encouraging both sides to reach a settlement. Unlike other international actors keen on a resolution, China does have leverage on both sides.

New oil contracts
The new contracts signed between China’s oil companies and the GOSS, to replace those agreed with Khartoum before the CPA, will certainly give the government more control to place demands on foreign oil companies.

However, the CNPC Chairman’s visit to Juba was led by a delegation of senior Communist Party of China (CPC) officials, indicating Beijing’s effort to curry favour by strengthening party links with the ruling SPLM.

The signing of agreements that seek to boost financial and economic co-operation between the two will increase Beijing’s influence as South Sudan diversifies its development assistance from its traditional donor partners.

The following day, the CPC delegation attended a ‘High-Level Strategic’ dialogue with the ruling NPC in Khartoum, where the strengthening of economic and military cooperation between the parties was agreed.

Beijing has demonstrated its considerable leverage on Khartoum in the past, notably during the crisis that emerged in Sudan’s western Darfur region in early 2003.

From 2005, China’s position evolved from strictly upholding the principle of non-interference in Sudan’s internal affairs to that of using “influence without interference”, applying both behind-the-scenes and public pressure to persuade the Khartoum government to accept the deployment of UN peacekeeping troops to Darfur in July 2007.

While China’s assertive stance on Darfur was a significant departure from a strict adherence to the policy of non-interference, it was in many respects a product of its time, due to the internationalisation of its role in the crisis which occurred in the lead up to the Beijing Olympics in 2008.

Following the invasion of the disputed border region of Abyei by Northern forces in May last year, an agreement was signed in Addis Ababa for the deployment of Ethiopian troops to the area under a UN Security Council mandate.

Although Beijing did dispatch its Special Envoy to attend the negotiations, where he called upon both sides to settle the dispute peacefully, China was not seen to have been at the forefront in the resolution of the dispute.

Fundamentally, breaking the deadlock in the current negotiations will require a resolution on oil issues that is attached to a wider agreement on the status of Abyei, over which both sides are currently unwilling to compromise[3].

China is unlikely to take a pronounced stance on issues beyond those pertaining to oil transportation, which directly impact on its economic interests, thus limiting China’s capacity to intervene.

Moreover, in the event that the current dispute on pipeline sharing should spark violent inter-state conflict in which its oil operations are attacked, China’s primary concern will be ensuring the safety of the 15,000 workers it has based in Sudan alone, as China showed in its recent evacuation of some 30,000 Chinese citizens from Libya.

For now its seems that China will view its recent strengthening of financial and economic co-operation as the springboard from which it can appeal to both sides that it is not in their long-term economic interests to exacerbate the conflict.

South Sudan recently claimed that unspecified foreign oil companies operating in the country are taking practical steps to construct a refinery in South Sudan and a pipeline through to Port Lamu on Kenya’s coast.

The government has floated the idea of an East African pipeline in the past, but outside experts claimed that barriers included the geography to be traversed as well as the need to ensure enough production volume to fill the pipeline in future.

While the project may prove unrealistic in the short-term, Chinese oil companies certainly have an interest in the rapid construction of alternative transportation routes that would ease South Sudan’s reliance on Northern infrastructure in the future.

Concurrently, Chinese state-owned oil companies will be at the forefront of bids for oil concessions that recently opened up in the North.

In view of the turbulent economic situation currently facing the Khartoum government, one Chinese foreign policy official argued that further Chinese investment in Sudan’s oilfields and infrastructure would contribute to the shifting of its economy’s reliance on fees levied on South Sudan for the transportation of its oil through the North.

[3] See Enough Project (2011) Negotiations Between the Two Sudans: Where They Have Been, Where They Are Going http://www.enoughproject.org/publications/negotiations-between-two-sudans-where-they-have-been-where-they-are-going 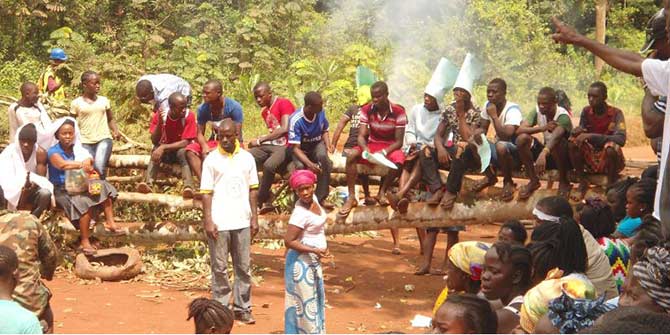 Bad Behavior has blocked 3972 access attempts in the last 7 days.