On the bicentenary of the birth of the Scottish explorer, Dr David Livingstone, LSE’s Joanna Lewis is one of the organisers of a conference celebrating his life.

If it’s irony you’re into, then organise a conference in central Africa to mark the 200th anniversary of the birth of Dr David Livingstone. Thanks in great part to the LSE Annual Fund, a small group of historians, literary critics, geographers, anthropologists, artists, explorers, writers and humanitarian activists, will gather in April, near to the Victoria Falls, in the small town that still bears the name of the British explorer, anti-slavery campaigner and missionary.

For starters, Livingstone himself probably wouldn’t approve of it. More passionate about studying the present, he looked firmly forward. He was focused on strategies for Africans to help realise their full economic, social and political potential as equals in the world. Of course he did so through an outdated Victorian sense of the superiority of  “Commerce, Christianity and Civilization”. But one of his less racist visions, was to connect working class men and women in cities like Manchester and Glasgow, with central African producers in “mutually beneficial economic intercourse” (the term of the day). Breaking through economic constraints remains Africa’s biggest challenge. For example, our institutional partners in Zambia couldn’t afford an international conference on their own; many of their staff will not be able attend this one without full “sponsorship”. Wages are in arrears. Since independence, only one graduate student has obtained a doctorate in history from the country’s national university. There are no senior Zambian women historians.

Is it possible to bridge this gap? We think so. Ironically, the early twenty first century easily mirrors the early nineteenth century when the world was opening up along an explosion in new media technologies and literacy. Today Africa has the fastest growing population and the youngest. The world is in the grip of a digital communications revolution. Keynote lecturer, Professor Keith Hart, will present a vision of a 21st humanised economy in Africa. We will hear about the potential breakthroughs from technology in studying Livingstone’s huge collection. Slavery and human trafficking is a scourge on our collective record on human rights, now as then. Yet then as now, individuals decide they can make a difference. In Livingstone town, a local minister pioneered a campaign to draw attention to the use of child slave labour to break stones for bricks in the luxury hotel industry. As he once told  me “sympathy is not enough”.

Likewise the conference will be a chance to hear women on women in history. Writers  and novelists will be talking to new audiences about their work highlighting the key role and nightmare of being one of  Livingstone’s women, from his long-suffering wife Mary, to the women-slaves in the caravans like Halima, who cooked his food and tended his sores. Their contribution was almost instantly erased in the memorialisation after his death in 1873.

Also, the conference brings a range of inter-disciplinary scholarship to an African audience. For example, Dutch artist Sybren Renama’s painstaking search for the fragments of the African mpundu tree under which Livingstone’s African followers/co-explorers buried him.

Critically the conference is a platform for Zambian historians to present their latest research. Dr Walima Kalusa has returned to the unique and binding relationship between Livingstone and local chiefs, deconstructing the paper trail created. Dr Friday Mufuzi reveals the struggle involved in exhibiting Livingstone for western tourist consumption versus local views.

It remains strong in towns like Livingstone where he is the patron saint of tourism, offering an economic lifeline. He is a hugely important figure to their Senior Chief, who regularly tells tourists about the swallowing of the “Living-stone” ceremony.  Livingstone remains a sketchily known figure among Christian congregations of Anglican/Scottish lineage. Significantly, many Zambians recall a personal connection with him, via stories passed down through oral histories. One former ruling party official loved remembering how his great grandfather told him Livingstone explained the rain cycle to them. Another African minister tracked me down to divulge how his ancestors translated the first bible into the local vernacular, inspired by his presence in their area. That personal connection; that believed sense of intimacy (however misplaced or exaggerated by missionary texts) was encapsulated by the verdict of former Zambian president Kenneth Kaunda: “he was one of us”.

In  a country shackled still by financial constraints, state underfunding of education and  the cruelty of HIV/AIDS, unsurprisingly one woman insisted that if Livingstone came back “he would  find  us a cure for AIDS”. One woman said he would start an NGO. Such are the post-colonial imaginings of a diverse population; economic and cultural entrepreneurs out of necessity, looking forward optimistically. One of Zambia’s young promising scholars submitted an idea for a paper on tourism and Livingstone’s depiction of African wildlife. He would do the research in time, he promised. Sadly, he died a few months ago. Our conference will be dedicated to him.

Joanna Lewis is  lecturer in African and imperial history in the Department of International History. For her latest research on the memorialisaiton of Livingstone see ‘The funeral of David Livingstone in 1874, African slavery and the heart of the nation’, (forthcoming, Journal of Imperial and Commonwealth History)

For more information about the conference visit: Livingstone2013.net and to book online visit the LSE Online Store.”

The West stands by as the military retakes Egypt 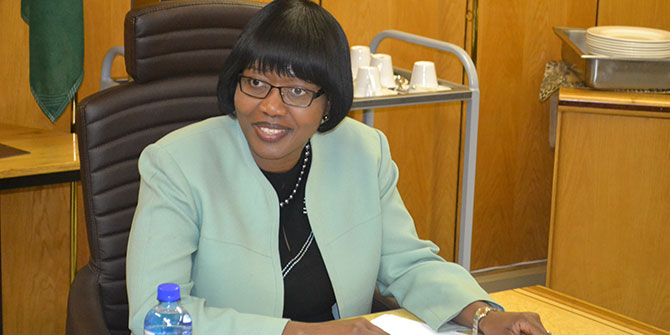 Bad Behavior has blocked 2810 access attempts in the last 7 days.