As the supervisor (accompanied by two fellow engineers) working for London Mining uttered these words to me, I realised that the the word humane in the English language was wrongly constructed; some humans, and more prominently, some human organisations, are devoid of passion or benevolence.

Sierra Leone: Civil war, rape, murder, corruption, devastation, child soldiers, blood diamonds. No. These words may be the words that come to your mind when you hear the country’s name but that’s not what the country is now. Having spent 3 months in Sierra Leone: peace, hope, reconciliation, perseverance, tolerance, strength, potential are what define it. The country has exemplary religious tolerance; Muslims and Christians inter-marry; vans drive by with “God bless Allah” written on them. The sense of community, solidarity and hospitality is overwhelming. People look out for each other, people help each other, and people appreciate everything – no matter how small – that they have in life.

What still hinders the country from developing, though, is corruption and foreign exploitation. 70% of people live below the poverty line. While natural resources should offer West African countries a route out of such poverty, many obstacles remain before the wealth that these minerals create reaches the poor.

This is not a situation where you can simply place the blame on the government. British companies exploitation of both the government and the people also plays a major role. If mining companies demonstrated corporate social responsibility in Sierra Leone, they could significantly improve the lives of 6 million people, and this resource curse would disappear. Currently, they are exploiting Sierra Leone legally, economically and socially.

A major concern about the practices of foreign mining companies in Africa is their failure to pay adequate levels of tax. Neither of the British mining companies working in Sierra Leone have conformed to the Mining Act of 2009, that was created with international support to ensure that foreign mining companies operated in a responsible way. Instead of ensuring this legal framework is honoured, the Government has sharply lowered the tax rates paid by both companies, while simultaneously introducing a tax on goods and services that has raised consumer prices. The companies persuaded the Government that their unorthodox fiscal arrangements and opt-outs were justified by the risks of a post-conflict society. Yet it has been 10 years since the civil war; and the people are remarkably hard-working and peaceful. The 2010 election passed without problem and there appears to be very few “risks” of conflict breaking out again. These company’s arguments for evading tax is therefore both outdated and invalid.

Sierra Leone’s gross domestic product (GDP) is $2 billion and a very small population of 6 million. African Minerals is expected to receive $1 billion dollars revenue from its iron ore project in 2015. If a fraction of mining profits were given to the government to go towards resource allocation, the poverty rate could reduce drastically. Let me demonstrate this with an example. It costs on average £15 to send a child to school for a year in Sierra Leone. So let’s say 4 million of the population are under 18. That’s 60 million pounds to send everyone in Sierra Leone to school for a year. That’s 6% of African Mineral’s expected revenue. By giving 6% of their revenue to the country could ensure all children have education. Obviously these statistics are approximate and Sierra Leone has many other pressing needs, but this is a clear example of where the money could go.

The social exploitation by mining companies in Sierra Leone stems from land grabbing to the fueling of prostitution. Many towns have been affected by mining company land grabbing. One that I came across is Lunsar – London Mining has put beacons all around the town claiming these mark the boundaries of their leased land, this included over the site of the oldest Secondary School in Lunsar. The population of Lunsar said they see this as an attempt by London Mining to wipe Lunsar off the face of the map.

It is one thing to economically exploit a country, it is another to socially exploit their population as well. Anyone who has been to a major town in Sierra Leone called Makeni knows that white British miners sleep with under-age and vulnerable prostitutes. A student in Makeni, Foray Sawanneh, explains how “Everyday they pass around the town going to bars using prostitutes – most of which are underaged. They are supposed to tell these girls to pursue their education but instead they sit at a big table and call my school mates to have sex with them. One of my friends, Abiatu, decided to sell herself to provide for her family and fund her education – her father had advised her not to become a prostitute but she decided she had to because of money. After the first person she had sex with, one of the white African Minerals workers, she was HIV positive. That is why I hate these people. She was ashamed to talk to me because she thought she would expose the HIV sickness. I asked her for the man’s name and address but he lived in a hotel. She did not come back to school because she felt too ashamed.” Abiatu, aged 17 years old, died on September 17 2012 of Aids.

As Pascale Hall, an adviser at Christian Aid who lived in Sierra Leone for a year, points out, “the worst thing is that they show no guilt, no remorse”. This is not just happening in Sierra Leone; HIV/Aids in South Africa is heavily fuelled by prostitution surrounding mining circles. The problem is that girls, like Abiatu, often see it as their only choice.

In post-conflict countries people are very apprehensive to question anything. They are instinctively non-confrontational due to the fact that they are terrified of anything like civil war returning to their country. And the government is also weak to stand up to anyone for their country’s rights. What this leaves is a perfect condition for foreign exploitation. Mining companies aren’t dealing with troubles from the war as they claim, what they are dealing with is a country of people full of potential, but very susceptible to any form of economic exploitation due to their reluctance to question anything. And what they are doing is not “helping Sierra Leone develop”, but effectively stealing the resources and potential improved livelihoods of millions of people, forcing people to move from their homes, paying the government next to nothing, and fueling prostitution (including child prostitution).

When I explain this problem to people, that the suffering people in Africa are facing is caused by Western mining companies, the response I usually get is: “well someone has to exploit the resources – if it wasn’t them it’d be someone else”, or “it would be impossible to change”. Well for once instead of just accepting society as it is, I’d like to take the route of attempting to change it – of calling upon corporations to take some social responsibility. If you don’t aim for something, you’ll never achieve it. To dismiss something as “impossible” to me seems a feeble excuse to condone the sort of exploitation occurring worldwide. I’m not asking you to join an NGO, or change your dreams of becoming a banker. All I ask is that you make sure that companies you work for make a profit while being socially responsible. And, if you’re inclined, join our campaign in January to STOP BRITISH EXPLOITATION IN SIERRA LEONE, and just this once, decide to decide.

This post originally appeared the Beaver, the LSE student newspaper. 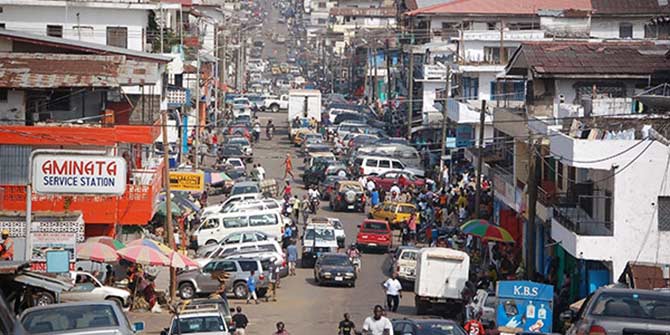 Poverty in the Midst of Plenty in Liberia