LSE’s Joy Ndubai calls Indians in Africa: Impact and Legacy by Olof G Tandberg an insightful quick read that delves into the economic, political and social impact of Indians in East and Southern Africa. From the 19th century trade with merchants on the shores of East Africa, Mau Mau resistance in Kenya, trading in Nyerere’s Tanzania, to Uganda under Idi Amin and apartheid South Africa, Tandberg offers a historical account of the experiences of prosperity, marginalisation and expulsion of Indians from the pre-colonial to post-colonial era.

Based on his dissertation written for the University of Stockholm on the economic importance of Indians in East Africa, Olof Tandberg expands his research beyond the economic and delves into the political and social impact and legacy of Indians in East and South Africa. As a cultural geographer with a special interest in minorities, Tandberg attempts to offer an exclusive narrative of the development of the Indian diaspora in Africa.

He opens the book with an anecdote describing the ill-treatment of an Indian woman and her son by a crowd of Africans in 1957 South Africa, an incident he personally witnessed while researching the segregation of higher education for non-European students as part of a fact-finding committee. Tandberg recounts how he noticed the Indian woman in a colourful sari exiting a shop with her son, carrying their groceries and moving proudly like a queen towards the bus terminal. Soon after an African male exits the same shop and pushes her son, a scene breaks out, and with the three at centre stage, a crowd of Africans gather around them and it quickly turns aggressive. This sets a somewhat sympathetic tone, a rare sentiment when it comes to conversations on the presence of Indians in Africa.

Arriving on the shores of East Africa via what Tandberg terms the monsoon culture, the early economic and cultural interaction both by land and by sea (by way of the monsoon winds) between Indians and East Africans is evidenced today by various ancient ruins and the influence of Sanskrit, Arabic and Gujarati in the Swahili language. The flourishing trade of spices, cloth, incense and the emergence of the duka (shop in Swahili) characterised this era that was eventually crushed by the arrival of the Portuguese, captained by Vasco da Gama. Gold-hungry, they pillaged and ransacked the villages and cities along the coast and, alongside various factors, making the Indian Ocean an insecure route.

The author then goes on to demonstrate the emergence and growth of dukas in Kenya emphasising their importance as economic cornerstones in various towns. This is followed by an account of the Zanzibar revolution in 1964, during which the island, previously described as having no racial antagonism, had become dominated by Indian traders and, in what was termed the hundred-day revolution, the Indian and Arab minorities were forced to leave the island. Tandberg then quickly shifts to the story of Mahatma Gandhi in South Africa who took the helm in defending the community from marginalisation both through legal processes and non-violent acts. Tandberg closes this chapter with a rather interesting statement, “South Africa without Mahatma Gandhi was a heavy blow for democracy. The implementation of apartheid meant that all civil rights were eliminated. The Master and Servant act created a modern cast society with sharp racial boundaries for all non-white citizens. This law became non-valid but the memories have survived, with frustration remaining, especially among the Africans. The Indians had become scapegoats in a hostile society where the evil flower of Indophobia still grows, nourished and watered by ignorance and prejudices”(72). An isolated statement that seems to relate more to the opening anecdote rather than the chapter itself, Tandberg veers away from a historical narrative, driving towards an analysis of the era without sufficient background. The Indophobia mentioned can only be evidenced by the acts of the white South Africans that the author describes and yet this statement appears to target the Africans.

Admittedly a rather short read and perhaps albeit too reminiscent of a dissertation, Tandberg covers long periods of history in short chapters jumping from one era to another without any clear structure. The effect of this is that it appears as though random accounts are offered rather than the shaping of a story of the Indian diaspora in Africa. Additionally, though the author endeavoured to focus on the Indian community, it is difficult to do so without giving mention to their direct impact on the African. To attempt this would be to detract from the entire story. Despite this, the book does offer a brief historical account that leaves the reader wanting to know more. An impressive undertaking through a substantial period of time (1500 BC -2010 AC) Tandberg manages to offer an overview while informing the reader of the long-established presence of Indians in Africa.

Joy Ndubai is a postgraduate student at LSE. 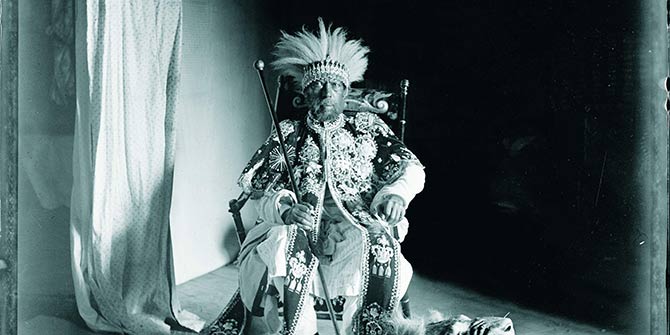 Bad Behavior has blocked 4687 access attempts in the last 7 days.