LSE’s Bronwen Manby welcomes a new African Charter which could have a major impact in ending statelessness for children born outside their country of origin.

On 10 February 2015 a ground-breaking but not-much-heralded document on human rights in Africa was launched in Côte d’Ivoire by the African Committee of Experts on the Rights and Welfare of the Child.

In the wake of UNHCR’s major new #ibelong campaign to end statelessness within ten years, the Committee, the official body responsible for monitoring the implementation of the African Charter on the Rights and Welfare of the Child, has produced one of the strongest statements yet in international law on the right to a nationality for all children.

The Committee used the Third Conference of African Ministers Responsible for Civil Registration for the official launch of its second General Comment, adopted last year, interpreting Article 6 of the Charter on the right to a name, to birth registration and to a nationality.

The General Comment provides guidance on the obligations of African states in relation to a question that many have struggled to deal with since independence, and builds on developments in the European, Inter-American and UN systems. While an important document in relation to birth registration, for a continent where around half of all children are not registered at birth, it is in its interpretation of the right to a nationality that the General Comment is perhaps most significant and innovative.

Article 6 of the African Children’s Charter provides that:

1. Every child shall have the right from his birth to a name.

2. Every child shall be registered immediately after birth.

3. Every child has the right to acquire a nationality.

4. States Parties to the present Charter shall undertake to ensure that their Constitutional legislation recognize the principles according to which a child shall acquire the nationality of the State in the territory of which he has been born if, at the time of the child’s birth, he is not granted nationality by any other State in accordance with its laws.

Like the UN’s Convention on the Rights of the Child (CRC), the African Children’s Charter recognises the links between birth registration and the right to a nationality, since it is through a birth certificate that the facts indicating the child’s parentage and location of birth, on which nationality is based, can most easily be established. It repeats the CRC’s statement that every child has the right to acquire a nationality, but goes beyond the CRC by including in Article 6(4) an adaptation of the specific requirement in Article 1 of the UN Convention on the Reduction of Statelessness that a child who cannot acquire the nationality of his or her parents shall acquire the nationality of the country where he or she is born.

The General Comment takes up this question, drawing on the Committee of Experts’ decision in the Kenyan Nubian Children’s Case, and recognising that “Even if the vast majority of human rights are not formally restricted on the basis of nationality, the lack of a recognised nationality in practice has a profoundly negative impact on respect for and fulfilment of other human rights”. Thus, the General Comment states that “While the right to a nationality becomes of greater significance as a person approaches and reaches adulthood, it is critical for the right to a nationality to be recognised for children.” Moreover, “the lack of recognition as a full participant in the political and social life of the country where a person has been born and lived all his or her life, has been at the heart of many of Africa’s most intractable political crises and civil conflicts.”

The General Comment “reminds African States that States do not enjoy unfettered discretion in establishing rules for the conferral of their nationality, but must do so in a manner consistent with their international legal obligations.” The Committee therefore condemns discrimination in rules relating to nationality, both the still-too-common discrimination on the basis of sex, but also discrimination on the grounds of race and ethnic group, which still exists in the laws of several African countries.

The Committee of Experts draws on guidance from UNHCR to comment that “it can be difficult to prove the risk of statelessness: that is, that a person does not have, or is not going to acquire, another nationality. In addition, it may be unreasonable to expect a child who may have a theoretical right to another nationality to take the steps needed to acquire that nationality.” Therefore, “States must accept that a child is not a national of another State if the authorities of that State indicate that he or she is not a national. A State can refuse to recognize a person as a national either by explicitly stating that he or she is not a national or by failing to respond to inquiries to confirm the child is a national.”

The Committee makes various recommendations in line with these findings, including that States Parties should adopt legal provisions that provide nationality to children born on their territory not only where the child is otherwise stateless, but also in other cases where the child has the strongest connection to that state. The Committee endorses the rule of double jus soli where a child is automatically attributed nationality if one parent (either mother or father) was also born in the State, and urges that children born in the territory of a State of foreign parents should have the right to acquire nationality of that State, and that this should be “after a period of residence that does not require the child to wait until majority before nationality can be confirmed.”

Nationality and belonging have created major challenges for Africa’s arbitrarily demarcated states since they obtained independence. The members of the African Committee of Experts have made a major contribution to the efforts to resolve these problems through their guidance on the rules that should be applied to avoid statelessness and also enable children to acquire the nationality of the country where they have the strongest connections.

The full text of the General Comment is available in English and French at: http://acerwc.org/the-committees-work/general-comments/

Bronwen Manby is an independent consultant and Visiting Fellow at the LSE Centre for the Study of Human Rights. 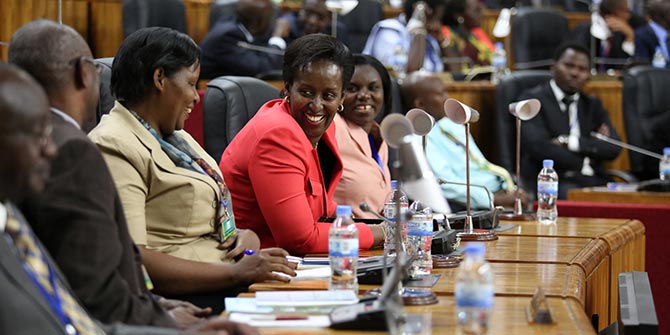