Frances Brill reports on what could soon be a changing order in global ideas.

Historically there has been a unilateral policy transfer: from the global north to the global south. This was traditionally enabled by colonisation. Part of this has been a top-down enforcement of the ‘West’’s ways of doing things, their versions of getting things done. These methods included ways of governing states, cities and all other levels of administration. Recently there has been a greater acknowledgement of how ideas really travel internationally. Initiatives are not created in the west and then enforced elsewhere: they are mobilised and transported around the world. In this mobilisation they change, they become more nebulous, more reactive to local circumstances. However, at the core of this is cycle of ideas is policy transfer. Policy transfer is facilitated by power and money, so big international organisations are at the heart of moving ideas. The World Bank, the UN and the IMF help move ideas around the world.

Ideas about governance and ways of running national institutions vary from place to place but within the economically powerful nations of the world there are generally accepted ways of doing things. Basically all have democratic elections at multiple levels, a key head of state who holds (or seems to hold) a lot of power, system of courts which enforce laws, some level of separation of powers and a progressive taxation system which aims to redistribute wealth. These are a given, they have become so entrenched in what is perceived as ‘the right’way of running a country, challenges to them are rarely raised. Part of this dominance means countries without the same rules are encouraged to move towards them. This might be achieved by financial incentives, tied aid or just by popular movements in their countries lead by western-educated leaders. This system raises a few key questions: who defines what is right for an emerging country? Why, given the problems America and Europe face, do we continue to promote their ways of doing things? What can the experiences of other countries add to the debate?

America and Europe are coming out of the worst recession ever, citizen’s faith in the political system is low and social movements like Occupy show general discontent. Their ways of running a country are not working for them, so why should other countries seek to copy them? There needs to be new, innovative forms of governance which react to the lived realities of a country and challenge preconceived ideas about what is the ‘right’way to rule. This year’s LSE Africa Summit is encouraging this debate: it is focusing on how innovative governance can be used in Africa to promote African growth for African people.

Mali is making radical changes. It has challenged the accepted ways of taxing its population: people pick their level of income tax. It is paving the way for other countries to follow suit: to set their own rules on how to govern their country their way. Governance structures should suit the country or place they are trying to govern. They should recognise the individuality and the need for context specific variations.

Innovative governance methods, challenges to the norm, in Africa could teach the rest of the world how to challenge their systems. Acknowledging the flaws in current systems and creating new ways of doing things, not just band-aiding the problems, could inspire the UK and the US to change. Ideas circulate in the world and new ideas can be born anywhere. Novel approaches to governance in Africa could lead a worldwide revolution.

Frances Brill is a research student at UCL.

Virtuous citizens: Pentecostal social activism in an age of suspicion 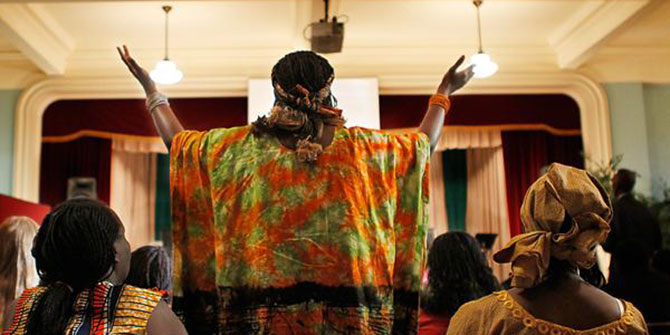