Megacities are a new phenomenon in history. The fact that many of them are in emerging countries deepens the challenges of governing these spaces. Can these vast, complex entities, rife with inequalities and divisions, be governed effectively? Elli Thomas thinks many of the conclusions made in Governing Megacities will be relevant for urban policymakers for a long time yet.

By 2050, 70 per cent of the world’s population will be living in cities. Today there are 35 cities, the largest being Tokyo; most future megacities, however, will be in developing countries, where traditional rural populations are experiencing urban transition on a massive scale. There is an accumulation of capital effect in megacities, in which the complexity of their networks and infrastructure constitutes a magnet effect. In other words, cities cannot be displaced, but will continue to grow.  According to the authors, by 2025, there are expected to be 22 megacities in emerging countries, particularly in China and southeast Asia. Megacities are not merely a scaled-up version of our existing cities, but rather they concentrate a greater myriad of functions and incorporate multiple internal and external linkages.

Framed around the need to address these challenges, there is a timeliness to the English translation of Dominique Lorrain’s volume. The product of the Chaire Ville working group at the Ecole des Ponts ParisTech, Governing Megacities was originally published in 2011 in French, and its translation marks a valuable addition to the literature on urban governance. The authors set their parameters early, defining governance in terms of institutions – both democratic local administration, but also independent or private bodies which contribute to urban public policy, and particularly infrastructure and other “support functions”, which they suggest are left out the debate where it focuses on “global cities” such as London and Tokyo. These institutions are studied through four case studies of large or mega cities – Shanghai, Mumbai, Cape Town and Santiago de Chile – and, following from the same methodology and theoretical starting-point, they each offer a highly detailed discussion framed around the actions of large cities in using institutions to meet challenges of poverty and inequality.

Alain Dubresson and Sylvy Jaglin’s study of Cape Town articulates the need to achieve a single administrative unit and the means and difficulties of managing these units. In its pre-2000 form, Cape Town was characterised by multiplicity, incorporating four different types of administrative units which embedded apartheid. A transition following the agreement between the South African National Party and Nelson Mandela’s African National Congress in the early 1990s, resulted in an autonomous metropolitan government that covered the expanse of the city in a “unicity” government. Unfortunately, the alliance broke down within two years and the next few years saw chopping and changing between governments across the city. More successful, however, was the introduction of Cape Town’s data strategy – the Enterprise Resource Planning (ERP) system – which introduced a way of managing city services in one place. ERP collects and processes public data, replacing the previous 112 systems and 72 interfaces and replacing them with one system. Introduced very early for a smart initiative, the use of ERP was decided in 2000 and rolled out in 2001. Despite some teething problems, it has now become a showcase of the potential of data platforms for delivering efficiency in urban governments.

Géraldine Pflieger’s case study of Santiago de Chile is particularly interesting as it illustrates the effect of political insurgence on governance structures over a long period of time. The effect of the coup d’état in 1973, which replaced the socialist government with a neo-liberal but highly centralised military government, still affects modern urban governance. In 1973, General Pinochet replaced all instruments of local government with appointed Mayors led  from the centre, as well as leaving many functions – such as housing provision – to the market. The effect today is that there is no devolved metropolitan government. The focuses on economic growth but is unable to act responsively to the results of that growth. This is experienced particularly in public transport, where there is no institutional body able to manage the service at the scale required for a growing city of 6 million.

Maintaining a coherent theoretical framework from a multi-authored volume is always complex. In Governing Megacities, in particular, there is a lack of clarity in conclusions and recommendations. The final chapter is extremely useful in bringing together the four case studies, and draws together three institutional variables needed for successful governance: for urban governance to be congruent with the city’s built-up area; for local government to be strong enough to exercise power over a range of institutions; and for political organisation to map on to administrative organisation. These three factors offer a useful route-map through the text referred to In the intermediate chapters, however, there is little explicit signposting towards these conclusions, which makes the intermediate research more of a narrative, and weakens the strength of the concluding statements.

The other issue with Governing Megacities is that urbanisation moves fast. Despite the recency of the translation, things have already moved on since it was first published in 2011. The 2007 data on megacities used in the text has since been superseded, and quite significantly — while the introduction suggests that there are 19 megacities globally, there are now 35 according to 2015 data.

Nevertheless, putting the detail to one side, there are conclusions that will be relevant for urban policymakers for a long time yet. Perhaps most useful to remember is Lorrain’s introductory recommendation that leaders need two kinds of responses: those that meet immediate challenges, but also those that deliver lasting institutional frameworks that can support governance long-term. Urban policymakers in cities large and small globally could benefit from this point, and from developing strategic rather than reactionary policy.

Elli Thomas is a researcher at the Centre for Cities. She has a particular interest in smart cities, urban design, housing and planning. You can find her on Twitter at @elli_thomas.

This was first published on the LSE Review of Books. 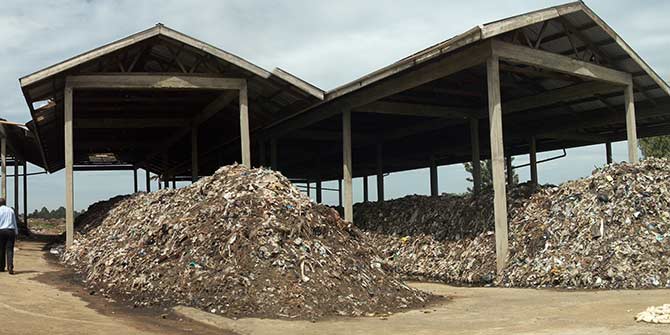