On 17 and 18 February 2016 the Department of Government hosted ‘Thinking Across Borders’, a mini-course on Modern African Political Theory led by Dr Martin Odei Ajei, from the University of Ghana. Katrin Flikschuh and Paula Romero tell us about the key themes and debates from two days of engaging discussion.

Comparing African and Western concepts of ‘self’

The mini-course comprised two sessions: one on African conceptions of the person and one on theories of African statehood. Introduced and contextualized by Dr Ajei, both topics led to lively discussion and exchange between Ajei and student participants.

During the first session, on personhood, participants compared triadic African conceptions of self with the dualistic accounts within Western metaphysics, reflecting on the different implications of either for human rights theorizing. MSc political theory student Meredith Lockman found the communally oriented Akan conception of the person fascinating: “unlike most secular, Western conceptions, it gives reason for the inherent dignity of the human being – our possession of a ‘divine spark’ – whilst still allowing for degrees of moral personhood.”

The second session focused on the African colonial and post-colonial experience of statehood, and on the internal legitimacy deficit that continues, for a variety of reasons, to bedevil post-colonial African states. During discussion, the chief question that emerged was whether the stock of normative concepts associated with European models of statehood can have theoretical purchase in contexts whose experience of state formation is often radically different.

Student participants – whose home countries included Argentina, Iran, Israel and Venezuela, as well as Europe and North America – brought their own experiences to bear in noting the gap that still too often persists between standard assumptions in mainstream normative theorizing and actual political contexts and realities. These observations led to discussion about normative method, practice and ends of political theorizing, and how dominant current ways of thinking may fruitfully be challenged by African and other non-Western perspectives.

The mini-course was rounded off with tapas and drinks, as the group reflected on two days of rich and exciting discussion. Dr Ajei, who was impressed by the students’ intellectual seriousness and critical engagement, told participants: “I have learned a great deal from your challenging and engaged questions and contributions”, adding that, “we must find ways of continuing the conversation.” Anahi Wiedenbrug, PhD candidate in political theory, agreed: “this is what political thinking should be like – both in form and in content. We need many more true intellectual encounters like this”.

This article was first published on the LSE Government blog.

Katrin Flikschuh is Professor of Political Theory in the Department of Government. 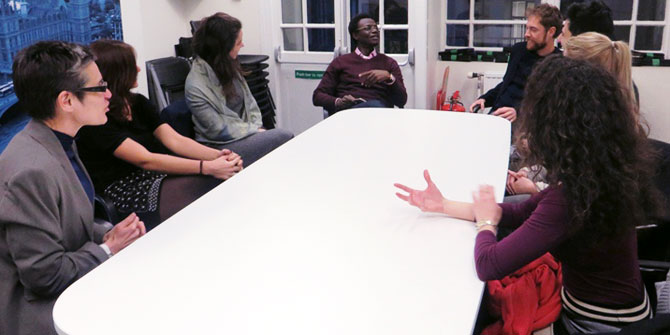 Bad Behavior has blocked 12590 access attempts in the last 7 days.