What role can researchers play in challenging negative stereotypes? Ishara Bintchumisi explains how his research on water governance in Goma has made him think deeply about the links between masculinity, unemployment and education.

When I began collecting data for a research project investigating household’s water consumption, I did not expect it would make me think about what it means to be a man, particularly a man in Goma.

Mercy Corp’s IMAGINE programme is a large-scale five-year DFID-funded urban water, sanitation and hygiene (WASH) programme that will reach up to one million beneficiaries through improved access and promotion in Goma and Bukavu in the Democratic Republic of Congo (DRC). The overall goal is to decrease diarrhoea rates among children under five through an integrated approach improving infrastructure, promoting effective behaviour change, reinforcing market systems for WASH services, and improving governance and community accountability of these systems.

My work follows the lives of households – some of which benefit from IMAGINE – spread across three neighbourhoods in Goma. We want to understand how they use their social networks and manage their finances to cope with unexpected challenges and daily hardships. We visit the households every two weeks, and sometimes in-between, to collect qualitative and quantitative data that we hope can improve future development programmes.

I am now 26, but as a young boy my father taught me that it’s important to study and that education is the key to another, perhaps better, life. However, my experiences in the field and within the households participating in our research project have challenged this lesson!

I have encountered household members who have told me that studying without earning money is a waste of time. They often say that I should find a job that pays well (to be clear, I am paid), and that I should give up my research and ambitions for further education. I have also met people who have studied, but because they are unemployed their wives and children do not respect them.

Overtime, I have begun to believe that widespread unemployment in the DRC – at about 58 per cent countrywide and perhaps as much as 80 per cent for young people – is harming our cultural values and increasingly forcing children to grow up outside of the house. This is changing what it means to be a ‘man’, including what is expected of boys and men by their wives and others around them.

According to Congolese culture and the Congolese ‘Family Code’, the man is the head of the household and no decision can be taken or executed without his permission. Yet, when the scourge of unemployment arises, the share of responsibilities quickly changes. A 48-year-old married man and father of six who recently lost his job at a local university told me:

‘My wife is a businesswoman and I am unemployed. I discovered that when the woman has the money and the man is unemployed the man loses his value in the household. He becomes dependent and cannot do anything against the will of the woman. This also has had an impact on my authority over the children. The children no longer respect me as they used to when I had my good job.’

In Goma, and I suspect the DRC generally, men are expected to financially take care of the household. This means paying school fees, buying food, medicine and clothes, and, if they drink, entertaining friends when they visit. This last one is the cause of many arguments.

Renting a house, additionally, is not well-considered as a man’s worth is often measured by what they will pass on to their children when they die. A 50-year-old man I know, with 5 children, put it this way:

‘In 2010, when I lost my job, I had difficulty paying school fees for my children. At that time, I paid 80 dollars per term for each child. My in-laws had houses to rent and my wife was the manager. They helped me to pay for the children’s schooling and my wife took care of the houses. This had very difficult consequences. The children have difficulty carrying out the orders I give them, and it always requires the involvement of their mother. The worst thing is that because of this state of unemployment my wife has decided to leave me to remarry elsewhere.’

In the low socioeconomic status households we research, unemployment also means that some of the parents prefer their children to earn money rather than study. For example, those with shops take their children to trade with them. Others, with children as young as 10, send them out to sell bananas, chikwangue (peanut sticks), charcoal and flour. Richer households try to secure places for their older children to train as mechanics or carpenters. According to them, they can earn more money than someone who has studied. For many others, the goal is to open a phone charging cabin or to buy a motorcycle to become a boda-boda (taxi) driver.

For younger children, this is a problem as they will grow up without knowledge of the benefits of education and are unlikely to place a high priority on schooling their own kids, thereby continuing the cycle. For older children, there is a danger that they will become bandits and pursue criminal lives in Goma and elsewhere. I also argue that men with limited education are more likely to believe that woman are objects to be manipulated. This is because they have had few chances to reflect on inter-gender relationships and even less to think about their own roles within Congolese society, including what it really means to be a man.

But what is to be done? The government surely has a role to play in raising parents’ awareness of the benefits of education. It should also help the economy create jobs. Yet, researchers also need to conduct further investigations that can reveal the changing role of women in households, especially where men are no longer the main providers. Only then can negative stereotypes and harmful practices be addressed and understood. 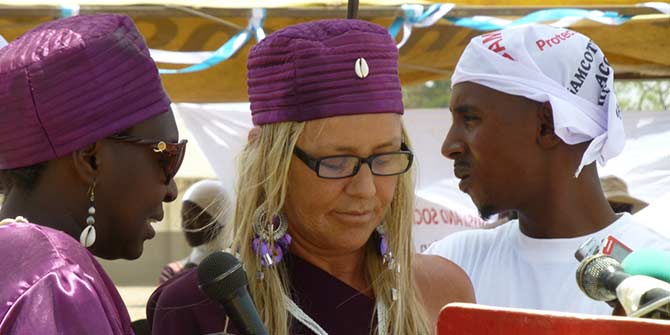 Bad Behavior has blocked 696 access attempts in the last 7 days.