How influential is the UK in negotiations over EU legislation? Simon Hix writes that while there is a perception among some actors within the UK that the country is marginalised during EU negotiations, the best available data on EU decision-making would suggest that this is not the case. Citing figures from the DEUII dataset on EU decision-making, he illustrates that the UK’s stated negotiating position is on average closer to the agreed outcome in EU legislative decisions than most other member states. Nevertheless, as these figures only run until 2008 and do not relate to more high profile negotiations such as those over the EU budget or EU treaties, more research is required to assess the true nature of the UK’s influence in Europe.

One key issue in the debate about whether the UK should remain in or leave the EU is how far the UK is currently “marginalised” in Europe. As Lord Lawson put it in The Times in May 2013: “while never ‘at the heart of Europe’… we are now becoming increasingly marginalised as we are doomed to being consistently outvoted by the eurozone bloc”. How much evidence is there in support of this claim? As a Senior Fellow on the ESRC’s UK in a Changing Europe programme I will be looking at this.

One good starting point is a dataset on the passage of 125 pieces of EU legislation between 1996 and 2008 put together by Robert Thomson, at the University of Strathclyde, and his collaborators. Robert and his colleagues interviewed over 350 decision-makers to identify the positions of each EU government, the EU Commission, and the European Parliament on each piece of law (on a 0-100 scale on each issue).

For example, on a piece of legislation in 2005 on sugar subsidies the positions ranged from stopping all subsidies (supported by Denmark and Sweden) to keeping current levels (supported by Poland). The UK’s position was closer to those of Denmark and Sweden, as was the outcome, which meant a substantial reduction in subsidy levels. The team also identified the location of the final policy outcome, the existing policy, and the importance (salience) each government attached to each issue.

Now, what does “marginalised” mean in this context? If a government is very powerful, we can assume that policy outcomes are likely to be close to the policy positions of this government. If, on the other hand, a government is marginalised, either because it is not powerful or because it is isolated from a deal between other governments, then final outcomes are likely to be further from the positions of this government. A government could be “lucky”, by simply having a policy position that is the same as that of many other governments. Nevertheless, by aggregating across a large number of issues on a large number of pieces of legislation, the effect of such luck should wash out.

So, Figure 1 shows the average “distance” between a government’s policy position (on the 0-100 scale) and the final outcomes on over 300 issues involved. Out of 29 EU actors (27 governments plus the Commission and Parliament), the UK was on average the fourth closest actor to final policy outcomes, and performed much better than France, Germany and the European Commission. So, far from marginalised. 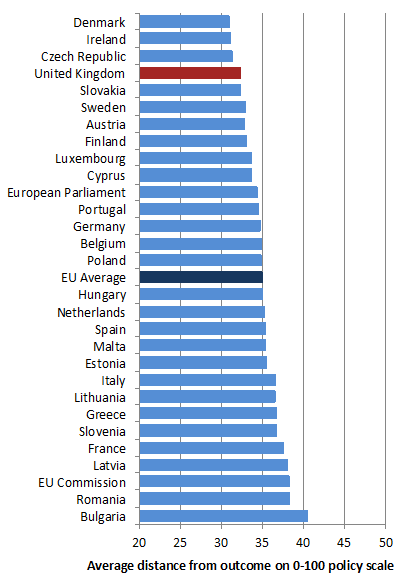 But, perhaps the UK government was only successful on issues it did not particularly care about? Figure 2 shows the average distances from outcomes on only those issues for which each actor felt very strongly (which they rated as “highly salient”). The results are even more positive from a UK perspective: the UK was even closer to the average policy outcome on these issues. 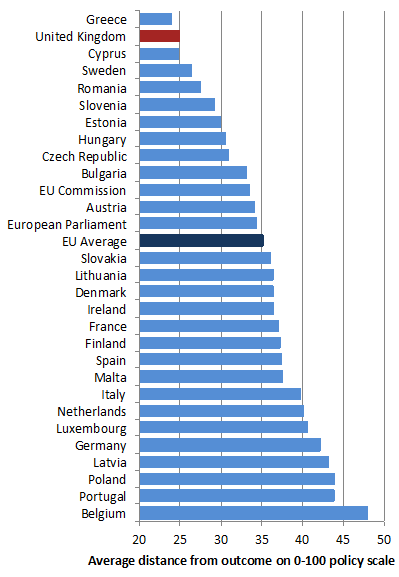 We should be careful not to infer too much from these results, as what could be happening on some issues is that the UK wants only a minor policy change from a current policy while some other governments want more integrationist or regulatory policies. Then a compromise deal leads to an outcome which is more integrationist or regulatory than the UK would prefer, but is nonetheless closer to the UK’s position than the positions of the other governments.

But, what if we look ‘below the hood’, at particular policy areas? As Figure 3 shows, policy outcomes are close to UK positions on tax, social affairs (such as on the Working Time Directive), justice and home affairs (such as data protection), transport, fisheries, and migration (such as rules on the free movement of people and common asylum policies), whereas the UK government was quite some distance from policy outcomes on internal market issues (including financial services regulation), agriculture, and external trade.

And a more detailed analysis reveals that there are many specific issues on which the UK did relatively well in terms of being close to the outcomes, as well as many on which it did relatively poorly in these terms. The abovementioned reduction in subsidies for sugar production in 2005 is an example of a UK success, whereas the UK had opposed reducing sugar subsidies in 2000, and had lost. Likewise, the UK opposed a regulation from 2000 on liberalising the market for bananas, which has had significant implications for developing countries. But, the data retention directive of 2005 was a UK success. 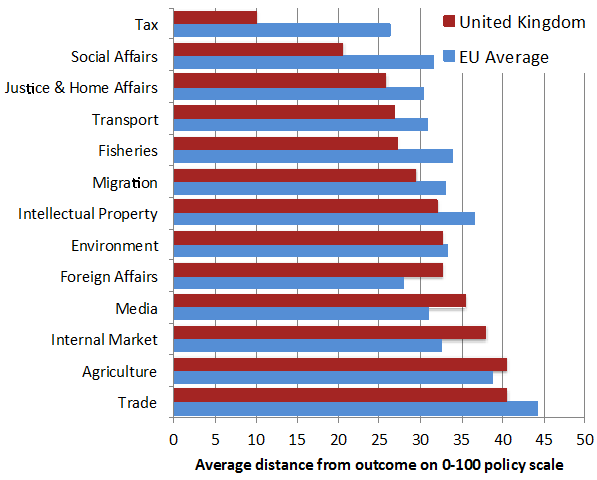 Overall, using the best available data on EU decision-making, there is strong evidence that on average the UK has not been marginalised in the making of EU laws. The UK government has been closer to final policy outcomes than most other governments. This is also true for policy issues the UK government has been particularly concerned about, although there is some evidence that on certain policy issues, including internal market and trade, the UK has been less content with final EU decisions.

But there are some important caveats to these findings. This dataset only covers policies that are subject to the main EU decision-making procedures, so not the EU budget or international treaties. The data only goes up to 2008, and obviously a lot has happened since then. Hence, to address the issue of whether the UK has become more marginalised in the EU since the Eurozone crises and the EU’s response to the crisis I will consider other types of evidence and data in future posts.

Note: Versions of this article also appear at The Guardian, The UK in a Changing Europe, and LSE’s EUROPP blog. This article gives the views of the author, and not the position of BrexitVote blog, nor of the London School of Economics and Political Science. Featured image credit: Number 10/flickr (CC-BY-SA-2.0) 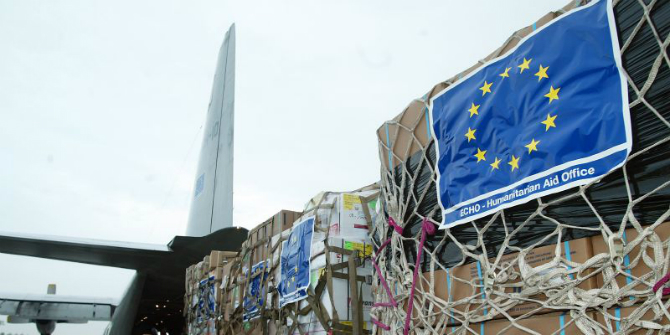