Although the upcoming UK referendum on EU membership will only be the second time the British electorate has voted on its participation in the integration project, over 50 referendums have been held elsewhere in Europe on other aspects of European integration. Sara Hobolt assesses what lessons these referendums might have for the UK.

When Britain goes to the polls, at some point before the end of 2017, to vote on whether to stay in or leave the European Union, it will be following in the footsteps of many other European countries. Since the early 1970s, over 50 referendums have been held across Europe on various aspects of European integration. Most of these have concerned either a proposal that a country should join the EU or that an EU Treaty should be ratified. What do we learn from these past referendum experiences?

Most importantly, perhaps, that governments should never be complacent when calling a vote on the EU. Since 2000, there have been 21 EU referendums and in six of these a majority of voters rejected a proposal that had the broad backing of the mainstream political parties, the media, trade unions and business organisations. Such ‘No’ votes even occurred in countries that are traditionally very pro-European, including France (which said Non to the Constitutional Treaty in 2005) and Ireland (which first time around at least voted against ratifying the Nice and Lisbon treaties).

Between them, these referendum experiences have revealed four key characteristics of ballots on the EU: the campaign matters, party messages are important, the framing of the “reversion point” is crucial, and, finally, EU referendums are not just about the EU.

The polls during the early stages of a referendum campaign often give a very poor indication of the actual outcome of the vote. Attitudes towards the EU are far more malleable than vote intentions in general elections. Many voters will change their minds as the referendum campaign progresses. And many remain undecided until they cast their vote.

Importantly, a large proportion of voters may never make it to the ballot box. Getting people to vote could be crucial in the British referendum, as Eurosceptic voters are more likely than those who support remaining in the EU to say they will definitely vote. A lacklustre campaign with low turnout is thus likely to benefit the Leave camp, whereas a high-intensity campaign leading to high turnout will more likely boost the Remain side.

Referendums give voters a direct say on policy outcomes, but parties are crucial in structuring the debate and the choices that voters face. During referendum campaigns, voters tend to turn to the political parties to which they feel closest for guidance on which way to vote. Of course, not all voters follow such party “cues”, but they have been shown to matter.

Yet when parties are openly split on the question, as the French Socialists were in the 2005 campaign, party messages have a much weaker effect. In the UK both the Conservative party and the Labour party have already displayed a degree of internal division that is likely to weaken the impact of their recommendations to voters. The experience of past referendums suggests that limited campaigning by the main opposition party often contributes to a defeat for the government. The efforts (or lack thereof) of the Labour party in mobilising its supporters in the British referendum could thus be decisive.

Voters face uncertainty not only about what Britain’s future within the European Union will look like, but also crucially what will happen if they vote to leave the EU. The “reversion point”, or the consequences of rejecting the proposal, has been shown to be a critical determinant of how people vote in EU referendums. Voters are generally risk averse, and hence when the “reversion point” is presented as a radical break with the status quo, or is associated with great uncertainty, this favours the Remain side.

Of course, there is a danger for governments that if they exaggerate the consequences of voting No to their proposal they will be accused of scaremongering. However, the experiences of the Danish and Irish No votes (to the Maastricht, Nice and Lisbon treaties), which were all reversed in subsequent referendums, demonstrate the persuasive power of highlighting the negative consequences of a second No. As the campaign manager of the Irish pro-EU “Alliance for Europe” explained when describing their strategy during the second Nice Treaty referendum:

We structured our campaign around the theme of the consequences of saying No. There was an element of threat. But the threat was real.

EU referendums are not just about the EU

Finally, it would be a mistake to think that voters care only, or even primarily, about the EU when they cast their vote in EU referendums. As the former Irish Minister for Europe, Dick Roche, said poignantly: “The problem in a referendum is that you can ask the right question, but people answer other questions.” Referendums are potentially an opportunity for voters to express their dissatisfaction with the political establishment, and with the government in particular.

This is why referendums held during the midterm of the electoral cycle, when governments are often relatively unpopular, are more likely to end in defeat. Such protest voting is especially common when the campaign is less intense and citizens feel that less is at stake. This potential mood is one reason why both sides need to fight a broad-based campaign that involves well known individuals who are not closely associated with the established political parties.

In comparison with past EU referendums, the Remain side in Britain faces a particularly tough challenge: the British public is more Eurosceptic than other European electorates and British parties, media, trade unions and business organisations are more divided over Europe. However, the choice facing voters is also starker than in any previous referendum held in an existing EU member state – to leave or remain in the EU – and this will most likely make it easier for pro-Europeans to appeal to voters who are risk averse.

Note: This article gives the views of the author, and not the position of BrexitVote blog, nor of the London School of Economics and Political Science. This article was first published at the new ESRC-sponsored blog www.whatukthinks.org/eu. 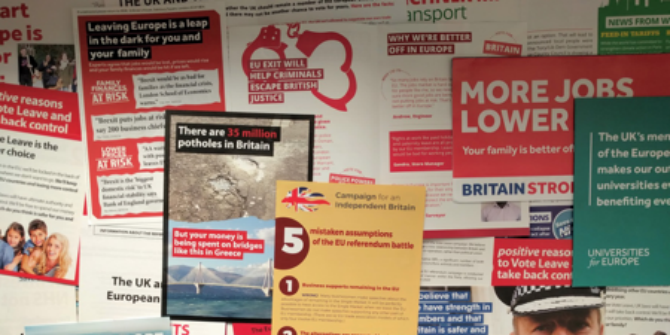