The Brexit vote has thrown different conceptions of democracy into sharp relief. Some are horrified at the conduct of the referendum campaign; others see the result as the revealed will of the people. Luke Temple uses tweets from the March for Europe event on 3 September to show how these views clash. He concludes that the pro-EU movement needs a clear aim if it’s to make any headway. Simply calling for a delay in invoking Article 50 is not enough.

The tweet on the right sums up the sentiment that the March for Europe was an anti-democratic event. The account owner re-tweeted a statement from the Liberal Democrat account, which voiced the perspective that a ‘United Britain’ should be a part of the European Union (with lots of people waving ‘In’ signs). At face value, this suggests overturning Brexit. ‘Today we march against democracy’ concluded the tweeter. In a similar vein, another tweet said: “What do we want?” “Democracy” “When do we want it?” “When the result goes our way” #marchforEurope”.

Other users shared a screenshot of the referendum leaflet sent out by government to highlight what they considered a key phrase: “The government will implement what you decide.” A large proportion of the twitter ‘conversation’ appeared to echo similar feelings. For them, the electoral procedures of democracy are paramount.

This aligns with minimalist theories of democracy, such as that outlined by Schumpeter in his 1942 work Capitalism, Socialism and Democracy. Schumpeter’s bare-bones, procedural definition sees democracy as primarily a system ‘for arriving at political decisions in which individuals acquire the power to decide by means of a competitive struggle for the people’s votes’. Beyond this input from voters, Schumpeter had little time for notions of ‘the will of the people’ or the ‘common good’.

So for those with a minimalist view, a mass demonstration is, if not frowned upon, then something of a waste of energy. Yet such protests do have the potential to become problematic if seen as attempting to overturn a vote (more on which in a moment).

Criticisms of Schumpeter’s electoral-centric perspective generally present something along the lines that it is “as spare a notion of democracy as one could posit without draining the term of meaning”. Carole Pateman criticised Schumpeterian democracy because “it is the participation of the minority elite that is crucial and the non-participation of the apathetic, ordinary man lacking in the feeling of political efficacy, that is regarded as the main bulwark against instability.” Pateman’s analysis took to task Schumpeter’s view that the masses should be seen (during an election), but not heard the rest of the time.

And so broader understandings of democracy go far beyond voting. Indeed, it is considered a human right that people can voice their opinion through protest and freedom of association. Therefore, for those taking to the streets last Saturday, their marching was for democracy.

To the right is a well-liked and re-tweeted photo showing a marcher calling for parliamentary democracy. Here, democratic procedure is important, but it is the deliberative procedures of parliament that are crucial, and seemingly lacking. Perhaps most fascinating is the statement underneath however – ‘not mob rule’. It doesn’t take much to read into this a criticism of a democratic procedure (a referendum) that relied simply on (the tyranny of) a majority vote.

But interestingly, contradictory statements on the legitimacy of voting and ‘majorities’ were also present at the London demonstration. For instance, one slogan on a flag (retweeted a number of times) was that 63 per cent of people did not vote to leave Europe – a percentage produced by adding non-voters to Remainers. One tweet said: “Not to mention this unelected PM is of a party that doesn’t have a majority of the popular vote #marchforeurope”. Leaving aside the fact that a Prime Minister is not voted for, and that a single party hasn‘t won a majority vote since 1931, here the legitimacy of electoral numbers is again key. Isn’t this a call for the ‘mob rule’ just dismissed on a fellow marcher’s placard?

A tweet arguing directly against anti-democratic criticism focused very much on voice and participation: So #marchforEurope is a march against democracy, eh?…That same democracy that allows people to freely voice their views, eg in a march? Here then, democratic participation is clearly understood as far exceeding the Schumpeterian view.

A final prominent argument raised by tweeters supporting the march concerned the referendum itself not being democratic because voters were misled and lied to: democracy is undermined if those voting are ill-informed. A selection of placards suggested this, including messages such as: “No goodbyes based on lies”, “Referenda – loved by liars & the gullible”, “Hey Hey Boris J. How many lies have you told today?” and rather explicitly “A referendum won by lies and ignorance is not democracy”. Therefore, something needed to be done. But what?

Clearly, differing conceptualisations of democracy clashed over the #marchforeurope. But as this final tweet legitimately asks: if the result of what many see as a democratic procedure was not to be overturned, what, exactly, was the march for? Why was the protest named for ‘Europe’, yet not the EU? Beyond a pro-European vision, did it have political demands? Contradictory slogans and placards suggested no clear message.

In his speech on the day, Owen Jones was very clear – he argued there was no overturning the result, but there would be a push to hold politicians to account and to drive out xenophobia and racism. Yet for the vast majority of people, who experience politics only at a glance, this short speech is subsumed and easily lost within a much broader, ill-defined, and potentially antagonistic political action that can be construed not as targeting the elite and the ‘powers that be’, but instead an enormous swathe of the voting public.

In this country a recent political narrative against inequality, coined by the Occupy movement, tried to unite the 99 per cent against an elite 1 per cent. Now we’re seeing the 48 per cent against the rest. This isn’t sustainable. The terms of the Brexit referendum were harmfully ill-defined. But politicised responses need to learn from this, not continue the trend. Without strongly defined demands and political messages, a demonstration of this kind too easily allows itself to become defined by others projecting onto it. And when the political act can be understood as wishing to overturn their vote, the 52 per cent are unlikely to see anything positive; if they claim to see anti-democratic posturing, there is little to assure them otherwise.

Now, these tweets aren’t representative and organisers can’t vet every placard and tweet, but they must be expected to try and build a coherent narrative around such a mass political act. Image control is important, otherwise an act of democratic political participation might just do more harm than good.

This post represents the views of the author and not those of the Brexit blog, nor the LSE. It first appeared at Democratic Audit.

Luke Temple is about to complete a PhD on citizen support for democratic governance at the University of Sheffield and is a Research Associate at the Department of Politics there. 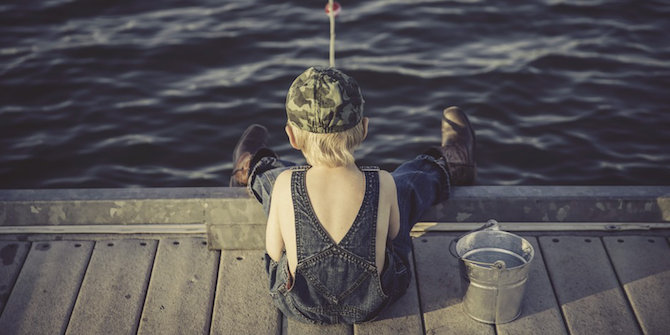