The reasons for the rejection of the Italian constitutional reform seem to be social-cultural rather than political. Marco Scalvini and Monica Fabris identify a new class of disadvantaged and disenchanted voters who feel that they have lost both the political influence and the social protections that existed pre-austerity.

The Brexit vote and the Italian referendum outcome reflect what Gramsci called a ‘crisis of representation,’ in which the links between parties and their electorates break down. The electoral results indicate a rejection of traditional forms of representation. This crisis is an explosive mixture in which political institutions cannot defend themselves if they do not rethink and reform not only economic policies but also the current vision that the ruling elite has of the working class.

Voters complain that the promised economic policies and political reforms have not delivered jobs and growth. The European and American leaderships have encouraged globalisation that  multiplies exclusion and inequality — a globalisation that produced free trade areas such as the European Common Market, NAFTA or (in the future) the TTIP by hurting the middle class and those who are already economically weakened. The illusion of holding up a global order based on economic interests, which can be adjusted only through a lex mercatoria, means ignoring the social conditions causing this cross-national discontent.

In Italy, as in most European democracies, since the 90s there has been a trend of distrust and disaffection with politics. At the same time, political leadership was not able to create policies that could generate the conditions for sustainable growth. In our ATLAS survey[1], we identified that 80 percent of interviewees feels alienated by the language of politics and poltical parties (Figure 1). 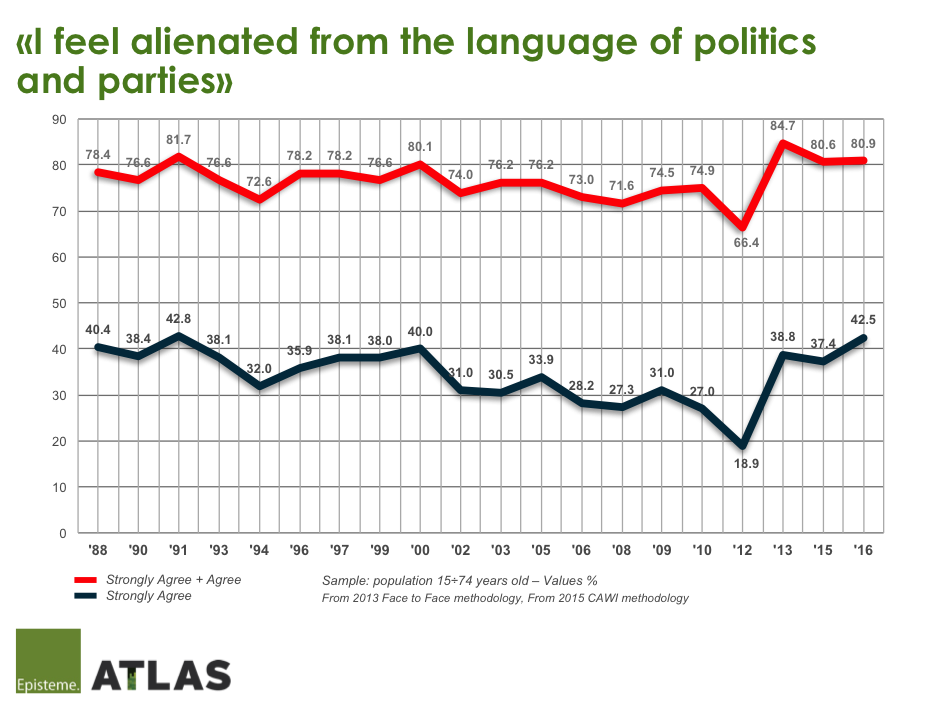 Such distrust has gradually turned into resentment because of pessimism, uncertainty, and insecurity that makes large sections of the population feel excluded (Figure 2, 3, 4). The resentment at the base of this crisis is expressed in the recent popularity of the 5 Stars movement, a party that aims to redefine political representation through radical reforms. 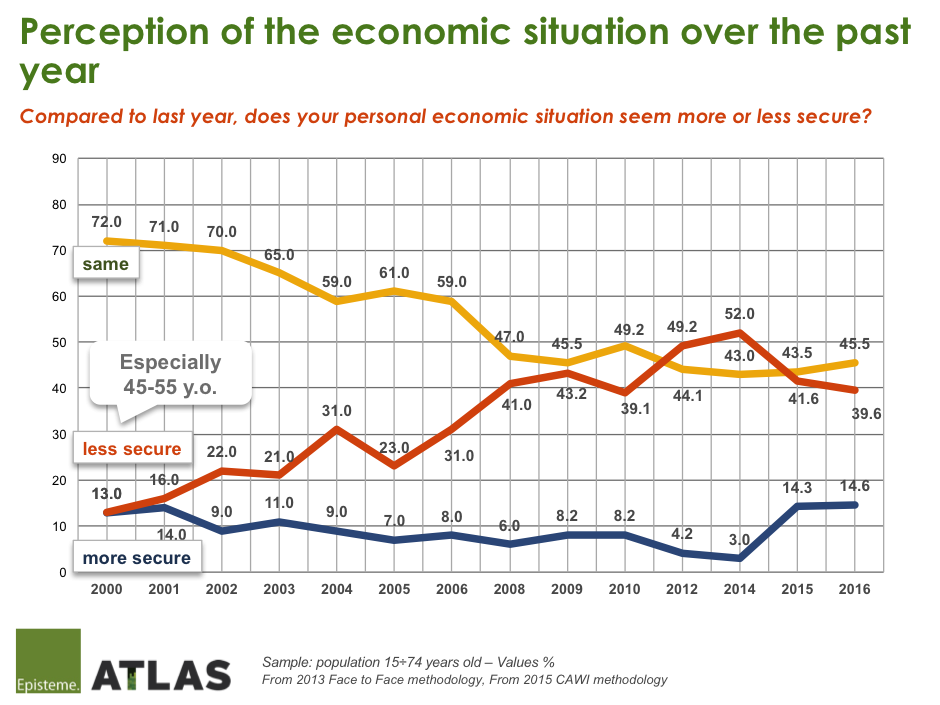 Figure 2 – Perception of the economic situation and living conditions 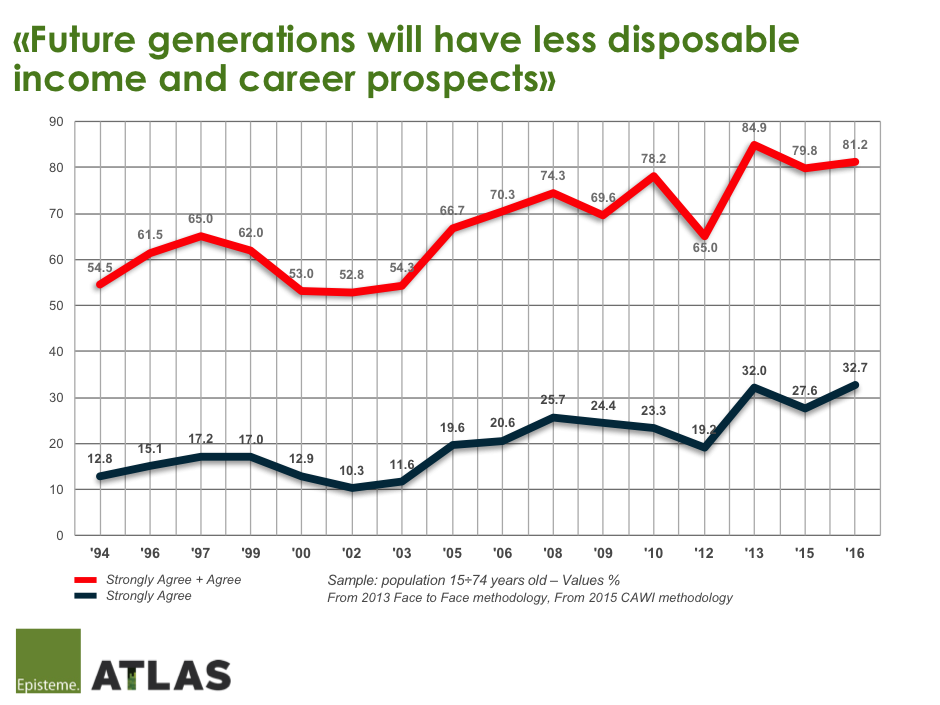 In this context, the traditional parties are suffering from an impoverished identity: the right (Forza Italia, the Northern League and Brothers of Italy) is living through a general crisis, and the Democratic Party (PD) has disavowed its roots, gradually losing its ideals and its relationship with the workers. In fact, today the PD interacts mostly with an affluent population segment that is characterised by a cosmopolitan lifestyle, a positive attitude towards Europe and a global market economy. During the ferendum campaign, the government has rallied for a YES vote by targeting a composite social stratum, one that includes entrepreneurs, managers, representatives from the world of politics and culture, and the segment of workers which is most protected such as employees and pensioners.

The ATLAS survey reveals (Figure 4) a preponderance for the YES among those who have higher economic security (54.3%). The professions most represented among those who approve the reform are pensioners and top managers (Figure 4). The NO vote is endorsed by the self-employed and freelancers (61.1), workers (66.9); housewives (62.6) and unemployed (68.4) along with those who report a less secure economic situation (66.3%). 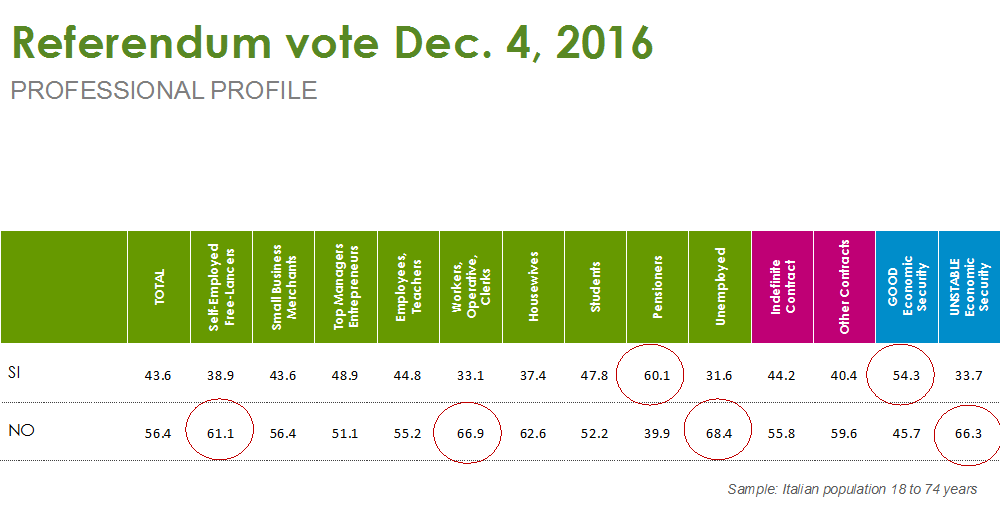 The result of the referendum reflects the polarisation between those who have been marginalised by the economic crisis. The process of social exclusion of a large part of the Italian population has found its expression in a protest vote for NO – similarly to what happened for the Brexit referendum. Fear and resentment are a widespread malaise, which is the result of social exclusion and lack of a general prospect of economic well-being. 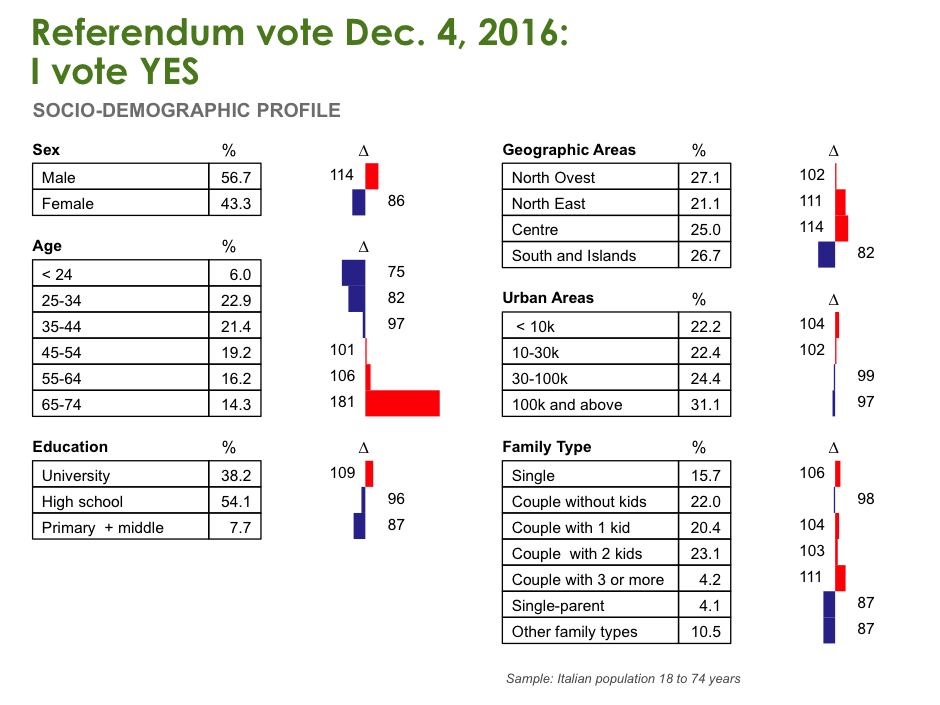 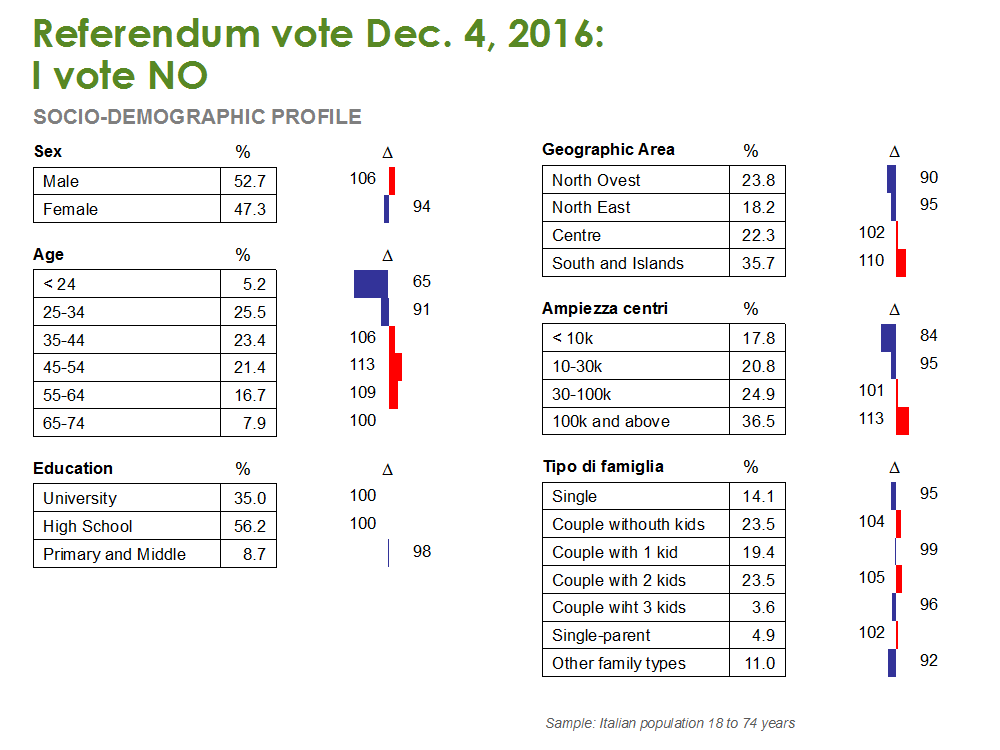 The socio-demographic profile of the ATLAS Survey (Figure 5 and 6) shows that particularly the self-employed and the unemployed, but also less-educated groups who view globalisation with suspicion, seem to be overrepresented in the vote to reject the constitutional reform proposed by Renzi. The sociodemographic profile (Figure 5 and 6) shows also the deviations between the voters and the average population. Those inclined to vote YES are mainly men, older, and with a higher level of education. Those who are in favour of NO are mainly characterised by remote geographical origin from the South and the Islands, or from large urban centres.

In the figures 7 and 8, the charts show the socio-cultural orientation of voters for YES and NO. The bubbles are the result of a combination of several items included in the ATLAS/Episteme survey. The map is generated through factorial analysis and focuses on the significant biases in Italian society: private versus public sphere in the vertical axis, openness versus closeness in the horizontal axis. The red bubbles reflect a positive perception toward the underlying item while grey a negative opinion. 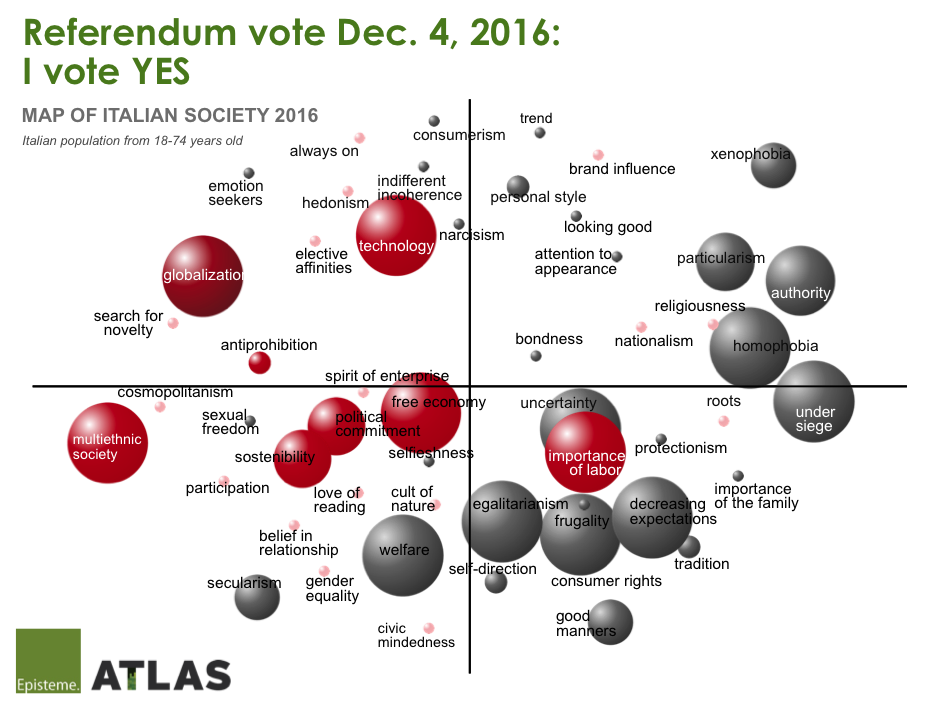 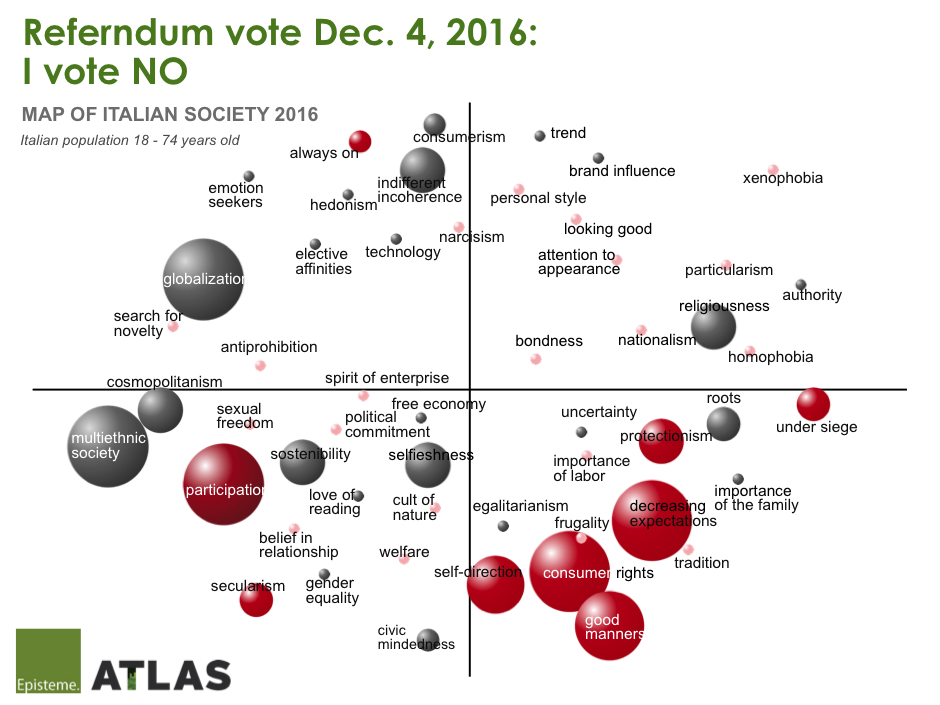 Figure 8 – Socio-Cultural Map: I Vote NO

Voting YES reflects a greater self-confidence to the changes that globalisation brings. Confidence in the market, technology, sustainability are the themes that characterise them, even with a strong focus on the theme of work and a persistent trust in traditional parties. Voting NO is characterised by a great concern for the future which leads voters to rely on protectionist policies (to limit the effect of uncontrolled liberalism) and to signal a growing distance between them and politics. At the same time, they express a great desire to participate in forms of direct democracy such as the referendum through participation and self-direction (Figure 9).

By self-direction we mean making your own decisions and organising your own political agenda rather than being told ‘what to do’. In other words, NO voters are not concerned about what other people think but they are seeking agency. We can also define it as authenticity, realism, anti-rhetorical politics, and nonconformism. Paradoxically, these voters seem to be more resistant to the influence of traditional political slogans, but are more predisposed to reproduce new slogans. Contrary to the common assumption, the ATLAS Survey observed that NO voters are less influenced by the mechanisms of imitation, validation and conformism of social media. 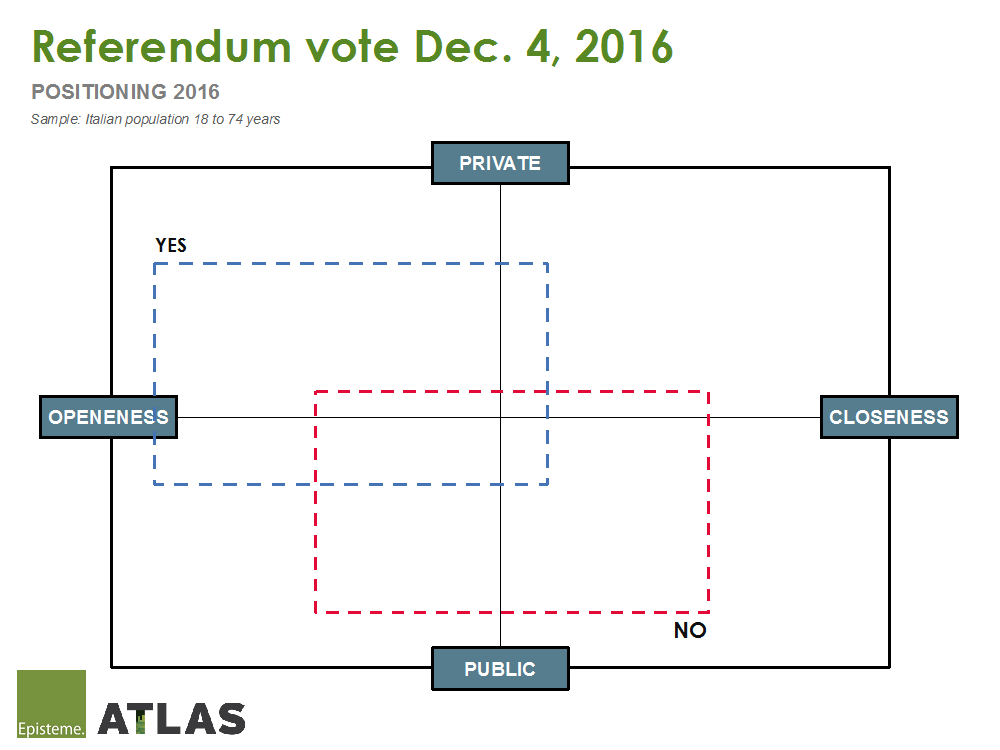 Those voting NO have a visceral desire to reaffirm their principles as opposed to the standardisation of the political discourse of the ruling elites. Thus, it is important to avoid a simplistic category of populism to define the reasons for voting NO. All politicians are populists during an electoral campaign and certainly Matteo Renzi was no exception. The point is to understand the causes of this crisis and its long-term effects. The reasons for the rejection of the constitutional reform seem to be influenced more by social-cultural reasons rather than political ones. The new disadvantaged class feels today that it has lost the political and the social protections, historically guaranteed by the left, thanks to the agenda of ‘change and reform’.

The support for the NO seems more a reaction to the current ruling elite (cosmopolitan, metropolitan, interclass) which has abandoned the material interests of the working-class to preserve the status quo, ignoring the legitimate concern expressed by those who have been more deprived in the aftermath of the economic crisis. Social and economic policies applied during austerity have dismantled the welfare state and have objectively penalised the weaker segments of the population, forfeiting any ideas of solidarity and betraying the inter-class ‘political pact’ on the basis of which the Italian constitution was adopted.

In this context, the results of our research on the Italian referendum highlight the extent to which the crisis of political representation goes along with the pauperisation of large parts of the population, especially the youth. Social conditions and expectations of the middle class, which remain essential for any democratic system to function, have been deteriorating since the end of the last decade. Considering the representation crisis, what seems to be more striking is the refusal to understand the deeper concerns at the root of this large socio-economic distress and the incapacity to dialogue with those deprived by the crisis. The consequences of this social fracture and its political effects have become difficult to predict as both the Brexit and Italian referendums have proven. The large disaffection of voters is not just a temporary condition but a trend noticeable in subsequent votes over the last few months. 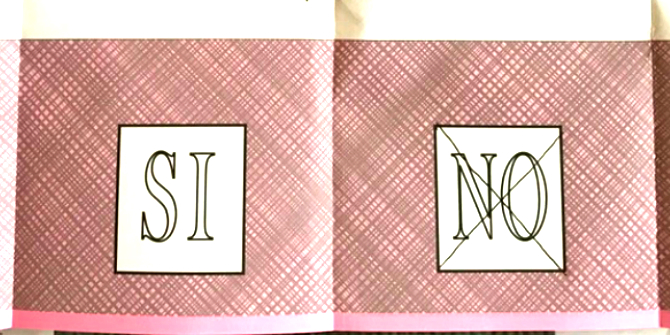 The failure to interpret the global disorder in which we are living, and blaming populism, prevented a serious analysis of the causes of this crisis of representation. Whether there is a larger ‘crisis of hegemony’ lurking as well, one in which the state and international institutions no longer fulfil functions remains to be seen. But we can observe the elements of a crisis of representation that could in turn precipitate into an irreversible political fracture, further exacerbating  the cultural, social and political problems of globalisation. However, voters seem to be fed up with the status quo cronyism, austerity and the entanglement of finance to the government. How many ‘Brexits or ‘Trumps’ do we need experience to understand it? The failure to offer a serious alternative to the current economic and political maladies of western democracies may have repercussions for the generations to come.

This article gives the views of the authors, and not the position of LSE Brexit, nor of the London School of Economics. Featured image courtesy of Marco Scalvini.

Monica Fabris is a philosopher by training and a specialist in dynamic psychology applied to social research. She is President of the Episteme research institute  which monitors the socio-cultural values, lifestyles and key opinions of Italians.

[1] The sociocultural Survey ATLAS monitors the values, lifestyles and key opinion of Italians. The methodology includes 4000 CAWI interviews conducted annually using a sample of 2,000 cases representative of the Italian population.