As 2016 draws to a close, the Commons has voted to trigger Article 50 in March 2017, Britain and the EU have established clear red lines for the exit negotiations and both have shown signs of flexibility. And the two recent by-election results indicate the country is content with Theresa May’s approach. Tony Hockley says the groundwork has been laid for a rational, incremental Brexit.

Five months on from the referendum, high emotion has been replaced by high rationality. While opinions on the outcome are just as divided as they were in June, with little evidence of regret by voters, there is widespread concern that politicians should be making progress in delivering Brexit. They are now doing so – but rationally and incrementally.

In an overwhelming Commons vote on 7 December, the government and Opposition agreed that a Brexit plan should be developed and scrutinised, and Article 50 invoked by the end of March 2017 at the latest. That the major parties in the Commons have combined to agree this approach should provide considerable reassurance to negotiators on both sides of the English Channel. It also makes clear that the UK will respect the full legal requirements of Article 50. As the lawyer Charlotte Morgan explained to the Times, Article 50 requires that the talks conclude on withdrawal arrangements, but “taking account of the framework” for the future relationship. The main parameters of this framework have now been set.

Both sides have established their red lines, with no signs of wavering. Nevertheless, they have made it clear that options are being kept open. This desire to take a sensible, flexible approach to the talks was reinforced when the December EU Summit made it clear that national governments in the European Council will be setting and revising guidelines and directives for the negotiations throughout, and the Council will form part of the negotiating team. The task will not be left solely with the European Commission’s negotiator, Michel Barnier. Those who have worried about emotive statements from the European Parliament should be reassured that its role is limited to the minimum possible. The guiding hand of the Council of Ministers will be important to the achievement of a considered, political resolution to the talks, and to winning national acceptance of the outcome across the EU.

It is already clear that the post-Brexit UK-EU relationship will not include UK membership of the Single Market or of the Customs Union. EU leaders from Brussels and member states have repeatedly asserted that single market membership requires the free movement of people. This is a “principle” that is currently being tested by Switzerland. Extensive concerns about immigration mean that it would also be tested by other countries if any weakening of this stance is suggested.  The EU Council demonstrated a remarkably hardline stance on this issue when Donald Tusk refused even to consider any form of reciprocal reassurance on residency rights for current expatriate workers ahead of formal Brexit negotiations. The EU’s lead negotiator, Michel Barnier, has argued that the single market’s “four freedoms are indivisible”. For the EU, this is a clear red line.

It is inconceivable, however, that any UK government could agree to an outcome that does not give the UK the ability to control migration. Taking back control of migration remains the most significant motivation for Brexit. This is, therefore, the UK’s red line. The only possible conclusion is that the UK cannot be part of the single market after Brexit.

The government’s strategy must be developed with these two red lines in mind. The recent Parliamentary  by-election in the Sleaford and North Hykeham constituency will have done much to reassure Theresa May and her cabinet that a rational, balanced approach to Brexit will be accepted at home. In this constituency, in a campaign that was dominated by debates over Brexit, the Conservative party candidate took 53.5% of the vote – against just 13.5% for UKIP’s more hardline approach to the EU.  This was an exceptional by-election result for a governing party, particularly one that had not yet triggered Article 50, facing voters in an area in which 62% voted to leave the EU. (By contrast, in a by-election a week earlier in the London constituency of Richmond Park, the pro-Remain vote fell from 72% in June’s referendum to less than 49.7% for the anti-Brexit candidate in December.)

Several days before the Sleaford by-election the Secretary of State for Exiting the EU, David Davis, made it clear that the government would not rule out paying for market access. His subsequent remarks showed that this was not an unintended slip, but the inevitable reflection of a “thoughtful” approach to delivering on the red line of controlled migration whilst protecting the “national interest” on the economy.

Outside the single market, it will be imperative to economic growth that the UK is free to negotiate its own trade deals with the growth economies of the world beyond the EU. This is particularly true of the US, as the country under President-elect Trump turns it back on trade agreements with regional blocs in favour of bilateral deals, ostensibly with the UK at the front of the new queue. While the vote for Brexit has clearly undermined views of Britain within Europe, it appears to have had a beneficial effect beyond it. The country does need to be able to reap the benefit of this further boost to its “soft power” if the worst predictions for the post-Brexit UK economy are to be avoided.

The phoney war will soon be over and real negotiations will begin. The fact that those involved are maintaining cool heads and keeping their options open while respecting each party’s red lines can only bode well. Extreme emotions will swirl around the process for years to come, but a clear focus on rational objectives for mutual benefit within the established constraints will help. In the CETA trade talks with Canada the emotional swirl came at the end of the process: with Brexit, it can be faced down at the outset. Events and actions this month have combined to set it on this most rational of paths.

Tony Hockley is Director of the Policy Analysis Centre. He was a special adviser in the last Conservative government, and to the former Foreign Secretary Lord Owen when he was leader of the Social Democratic Party (SDP). He is also a Visiting Senior Fellow in the Department of Social Policy at the LSE. 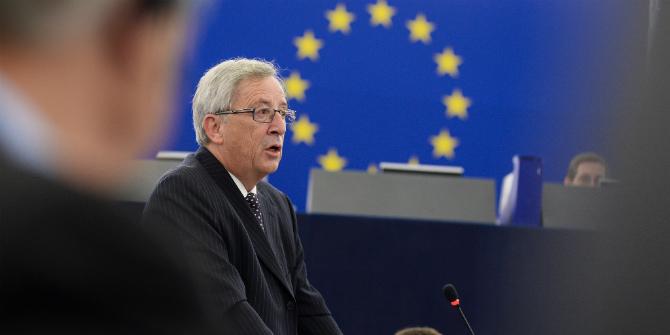