While Germany would prefer a “soft Brexit”, in which economic repercussions can be staved off by business flexibility, Britain’s exit from the EU creates new opportunities for its renewal. At the same time, should Brexit be the first step toward the disintegration of the EU, Germany will look back to June 2016 as the beginning of its worst nightmare: the return of orthodox, unchecked and dangerous inter-state competition in Europe, writes Jochen Klingler.

Britain is one of Germany’s closest trading partners. In 2014 about 15 per cent of all British imports came from Germany. From 2014 to 2015 the trade volume between Britain and Germany increased by 7 per cent to €183 bn (£158 bn). In 2015 German businesses exported goods worth €95 bn and services worth € 23 bn to Britain. According to the German Foreign Office, about 2.500 German businesses have subsidiaries in Britain. Furthermore, in 2014 some of the largest and most successful German companies like BMW, Linde and Volkswagen invested about €121bn in the British economy.

It is foreseeable that Brexit will not sustain this successful trading partnership. German businesses have already reduced their exports to the British market, mainly due to a lack of economic benefits. In the third quarter of 2016 German exports to Britain plummeted by 8 per cent due to the Pound’s weakness. In early February 2017 the Association of German Chambers of Commerce and Industry announced that German exports to Britain have further decreased by 3 per cent since early January 2017.

However, it is not just German businesses which are already affected by Brexit. In 2015 the German farming industry exported goods worth € 4.8 bn to the British market. The Association of Bavarian Farmers fears that the repercussions of a “hard Brexit” on German farmers will be severe, especially since Russia has implemented an export ban on Western agricultural products. The Association warns that the result of decreasing exports of agricultural products will be compensated by an increase in prices at home.

At first sight, this bigger picture reflects a not-so-cheerful trend. Furthermore, the British government’s desire for a “hard Brexit” will most likely have an additionally negative impact on German-British trade relations. Is this going to be a serious problem for Germany? One might not necessarily think so. Although some businesses seem doomed to swallow some losses and some prices are likely to rise, the overall picture can be considered more optimistic because Germany’s most valuable exports are high quality machinery and technology which are increasingly sold to emerging markets outside Europe. 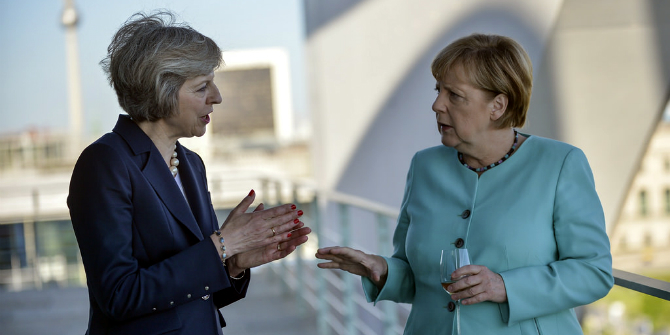 Even stronger optimism can be expected in regard to the political effects of Brexit. London has been a nagging opponent of increasing political integration within the EU, one of Germany’s most favourable aims. During the negotiations for a European banking union in 2012, for instance, Germany and Britain were at loggerheads with each other. London firmly opposed the supervision of its banks by an EU institution. After Brexit Germany may seek an opportunity for an increasing consolidation of European financial integration.

Similar opportunities may arise within the realm of the EU’s foreign and security policy. Great Britain has been an adamant opponent of a European army. The only exception to this opposition was during the premiership of Tony Blair, especially when he signed the Saint-Malo Declaration with the former French President Jacques Chirac in 1998. However, since the invasion of Iraq in 2003 Britain lost its interest in the Saint-Malo Declaration and withdrew its support for a European Army. David Cameron re-calibrated Britain’s security and foreign policy relations with Europe anew when he signed the Lancaster House Treaties with former French President Nicolas Sarkozy in 2010.

Britain’s exit from the EU as well as its close defence relations with France can be a good opportunity for both France and Germany to revamp Europe’s Common Security and Defence Policy (CSDP). First steps into this direction seemed to have been taken already. Only recently have European Defence Ministers at a meeting in Brussels revived the idea of a European army by creating a military command headquarters. The German Defence Minister Ursula von der Leyen called this achievement ‘long overdue’, and her colleague, the German Foreign Minister Sigmar Gabriel, referred to it as ‘the first big step towards a stronger Common Security and Defence Policy’.

The sum of all fears

However, Brexit may herald a seriously devastating threat to Germany. It is not the rise of national populism. For Germany, unlike France or Denmark, Brexit does not entail the fear of increasingly vociferous calls for leaving the EU. In Germany, national populism is on the rise as well, but it appears to be politically much more contained than in France or the Netherlands; at least in Germany there is no reactionary populist running for higher office. Instead, Germany’s biggest fear is the demise of the EU.

A politically unified and economically integrated Europe with a single currency is in Germany’s vital national interest for at least three reasons: first, German foreign policy shows its strength and assertiveness in the international realm through its engagement in international institutions. Second, in its past, the nation has always suffered from unchecked economic and political inter-state competition with its neighbours. Germany is too big for Europe, causing too much anxiety among its neighbours, but too small for the world to be accepted as Europe’s leading power by its partners. Third, the heart of its economy, exports by medium-sized companies, depends on a weak single currency which also staves off devaluation contests among its neighbours.

Therefore, whereas Brexit can be an economic inconvenience and political opportunity at the same time, the break-up of the EU or the disintegration of the Eurozone would be Germany’s most horrific nightmare. Insufficient capabilities for self-protection, suspicion and balancing politics among its neighbours, as well as the return to a strong national currency, would summon spirits from the past. The fear of such geopolitical atavism may not be strong in Britain, but Germany is haunted by it. Difficult decisions like bail-outs for Greece, tepid policies of sanctions toward Russia, relentless insistence on dispute resolution without military force as well as a soft tone but a tough negotiating stance towards London in the Brexit melee elucidate Berlin’s worries of the disintegration of an order from which it greatly benefits and which it learned to operate quite successfully.

Jochen Klingler is a PhD student at the University of Sussex. He lives and works in Berlin.