Many of the EU citizens living in Britain are under 18. They go to school here and often envisage a future in the UK. But it remains unclear whether they will be able to stay after Brexit. Will they take their skills elsewhere? How would they judge a country that rejects them? Sara Young, who is researching the experiences of Polish-born adolescents, argues that restricting their right to live and work in Britain would be a self-inflicted ‘brain drain’ of young people in whom the UK has invested years of education.

Much has been made in the media about the potential brain drain of students and academics from universities in the light of Brexit negotiations; similar attention has been paid to a predicted dearth of NHS workers.  But as reported in the Huffington Post, there is one sector of the population which is frequently overlooked: those under the age of 18.  For in the ongoing debates over Brexit and how individuals will be affected by the process, children are frequently forgotten.

A valuable exception to this is the CORAM organisation, which has drawn up a paper asking for the consideration of children and children’s rights to be part of the negotiations.  The importance of protecting children, especially those who are especially vulnerable to trafficking and other abuses, is paramount.  As a doctoral researcher currently investigating the experiences of Polish-born adolescents living in the UK, my concern also lies with those children who came to the UK legally with their families, and who now feel they face an uncertain future in a post-Brexit UK.

But while my own study focuses on the children’s point of view, what is also striking is that little has been made of the potential impact on Britain if these children end up leaving.  Indeed, not to consider such children seems remarkably shortsighted.  One aspect which has rarely been discussed is that of the future brain drain and skills shortage, if these children are required to leave together with their parents.

Children of EU citizens who have come to the UK have been incorporated into the UK education system, as they are entitled to be, and most will have been educated at the expense of the state.  Like the others in their class, the secondary school students involved in my study are thinking about their GSCE or A-level choices, or which college or university to attend.  They envisage a range of jobs they might do: forensic police work, architect, translator and sports teacher. If, as part of the Brexit negotiations, they then have to leave, their education can be seen as a terrible waste for Britain in a number of ways.

Firstly, children who are now still at school may at the same time be planning to take up an apprenticeship, or to work towards a university degree.  In doing this, these young people will be contributing to the future of the UK, as much as the adults currently working here contribute to its present.  In purely selfish, economic terms, restricting their entitlement to live and work in the UK would be a waste of investment: the money spent on the education of these students will now not benefit the country in which these young people were educated, i.e. Britain, but the country to which they may go.  It is also a waste of educated people who had intended to contribute to the workforce with their skills and knowledge.

Moreover, children who have moved to Britain are often bilingual or multilingual.  That we lack linguists in the UK is an ongoing problem, with foreign language teaching in schools threatened, and university departments undersubscribed.  The potential benefits of bringing such language skills to the UK should be recognised to a far greater extent than they are at present.  In many areas, therefore, it can be seen that the potential brain drain from the UK and attendant skills shortage does not only apply to the adult population.

There is a further issue to consider: that of the emotional fallout and ramifications should young people feel that they have had to leave the UK.  Despite the fact that many youngsters have encountered incidents of bullying and racism, as highlighted by the tragic case of Dagmara Przybysz, they are still keen to remain in the UK.  One teenager in my study had been physically bullied at school, and ultimately had to change schools, but this had not affected his desire to stay and build his future in Britain.  However, if such a future becomes impossible, and EU citizens become increasingly less welcome or less able to stay in the UK, how will this affect the attitudes of today’s EU children towards this country?

As these young people become adults, they will perhaps be interested in leadership roles or in entering politics.  While their political ideas and understandings will evolve, what is likely to stay with these young people is the experience of their reception in the UK, the way they were regarded whilst living in the country, and the manner in which they and their families were treated in the bargaining over Brexit.  Today’s school students may be tomorrow’s negotiators, or antagonists.  By not even factoring them into the current debate, do we not run the risk of alienating our future allies in Europe?

The question in negotiating a sensible Brexit is how we can all gain, and how our future relations can be less damaged in the process.  This does not mean just in the next five years, but looking beyond that.  We must remember today’s generation of children.  They count now, and they will certainly count in the future.

Sara Young is a doctoral candidate at the Institute of Education, University College London (UCL). Her thesis focuses on the ethnic and linguistic identity construction of Polish-born adolescents living in the UK; she presented her findings at the May 2017 Polish Migration Conference held at the UCL School of Slavonic and East European Studies. Sara is the co-editor of a forthcoming Special Issue of Bellaterra journal, ‘Language Ideologies and Teaching in Multilingual Contexts’. 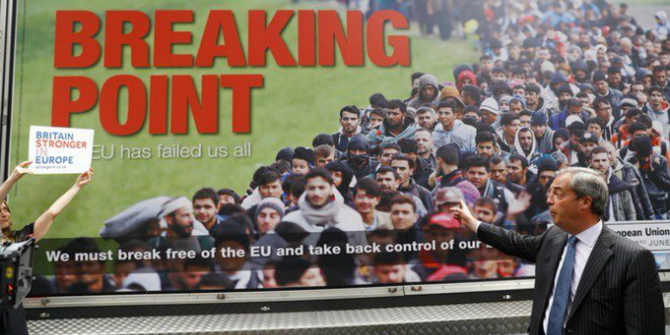