The European Union and the United States suffer from democracy deficits. Modern democracy is realised in regularly elected legislative bodies that, though small enough to house in a parliamentary building, are large enough to reflect the interests of an entire people. David V Johnson writes that by ratio of representatives to population, the US and the EU have among the least democratic of the world’s representative assemblies. 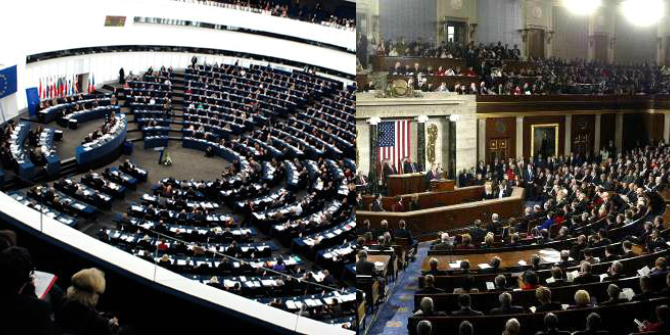 In bicameral systems, it is especially in a legislature’s lower house – an assembly such as the US House of Representatives – where democracy is most realised. The founding father John Adams thought that these assemblies should be ‘an exact portrait of the people at large’. His ideal might be elusive, but the US today is nowhere near it. To take just one example, the median net worth of a congressman tops $1 million. The median for Americans not elected to Congress is $45,000.

John Stuart Mill thought that the essential quality of a representative assembly was that a society’s range of perspectives and preferences find expression in it. In his classic essay ‘Considerations on Representative Government’ (1861), he described a democracy’s representative assembly as a place ‘where every interest and shade of opinion in the country can have its cause even passionately pleaded’ and where others ‘listen, and either comply, or state clearly why they do not’.

Achieving this totality of interest and opinion of a people requires that assemblies be quite large. How large? There is no simple right answer, other than that they should be ample enough to represent the people in all its diversity. But a comparative analysis of assemblies and ratios of representatives per capita can indicate some wrong answers.

A more realistic standard perhaps is the current global norm for representative democracies: approximately one representative per 146,000 people. Of course, many democratic countries are quite small, but even large countries such as Germany, France and the United Kingdom manage to hit this target by having rather large lower houses, with 630 seats in the Bundestag, 577 in the Assemblée nationale and 650 in the House of Commons.

As suggested by the UK’s decision to leave the EU and the desires of countries on the continent to hold their own referenda on membership, the EU and its governing institutions have reached a crisis point in popular approval. Brexit’s causes are complex, but the EU’s alleged ‘democracy deficit’ and the desire to ‘take back control’ from Brussels were catalysts. In this, the British were not alone. Large majorities in France and Greece view the EU unfavourably, and pluralities in Germany, France, Sweden, Italy, Spain and the Netherlands want more power returned from the EU to their countries. In the US, for the first time in the country’s history, a majority of Americans don’t like their member of Congress, and popular approval for Capitol Hill recently hit single digits, making the institution less popular among Americans than King George III before the American Revolution.

If citizens of a representative government are to be genuinely represented, their interests and opinions, in all their variety, must find voice in the legislature. If they are to feel represented, they must feel connected to their representative; they must be able to communicate their political views to that representative. For example, I live in Berkeley, California, a city of about 120,000 people. I feel that I can communicate and be heard by our mayor, although I suspect it reaches a limit of the sort of direct connection required between citizen and representative. My US Representative, by contrast, also serves nearby Oakland, Emeryville, Alameda, San Leandro, and Piedmont – which together total more than 700,000 constituents. Not only do I not feel a personal connection with her, but these communities, though similar to Berkeley in many respects, are also significantly different.

Since 1911, the number of US House members has been capped at 435; this number was enshrined in law by the 1929 Apportionment Act. Over time, this limit has lead to an ever-larger number of citizens per representative, an ever-larger gap in representation, and coincided with an ever-declining approval rating for Congress. At the same time, incumbents win re-election approximately 95 per cent of the time. US representatives have become senators, serving for long periods of time; they are less attuned to the fine-grained concerns of their constituents, and rich.

If the US and the EU followed global norms of democratic representation, they would have 2,217 and 3,481 representatives in their lower houses, respectively. True, Madison and the founders worried that too large an assembly would devolve into disorganised mobs. But such 18th-century worries should not apply to modern legislative bodies, where technology can make mass communication among representatives seamless and transparent, and the real work of legislation is done by committees and sub-committees. Besides, the US and the EU ought not, in this respect, be less democratic than China.

This article was originally published at Aeon and has been republished under Creative Commons, it gives the views of the author, and not the position of LSE Brexit, nor of the London School of Economics.

David V Johnson is a writer and editor living in Berkeley. He has a PhD in philosophy from Stanford University.