Universities occupy a complicated position in the post-Brexit landscape. Howard Davies says that rolling over existing arrangements, as the government is confident of doing, will not be easy or automatic. The future is unclear and he advises caution.

Anne Corbett (University World News 528 and LSE Brexit) is right to point to the UK’s intention to build higher education service provision into its future trade deals. She reports that Universities UK is aware of the opportunities that this might create.

This will worry many in the UK higher education community. Already it has seen its universally respected quality assurance system encroached upon by consumer protection legislation. Does it really want its versatile internationalisation initiatives to be relocated in the rule-based architecture of the World Trade Organisation?

All trade negotiations are lengthy and tortuous and it is worth looking closely at some of the complexities. First, of course, the UK has to extricate itself from the European Union – we know that this is not simple. Then it has to meet the challenge of negotiating with large economic blocs and countries with complex federal structures. Ultimately, the UK will find itself in foreign contexts where the uncertain distinction between private and public universities is much harder to navigate than at home.

These difficulties are daunting. So much so, that higher education would do well to stay within the familiar and proven framework of collaborative agreements based on mutual trust.

The question of the roll-over

The UK’s Department for International Trade currently has 20 working groups, set up to scope the feasibility of trade agreements with partner countries. Such is the fraught nature of the ongoing Brexit debates that it is impossible to say whether, when, with which partners, and in what order, any UK trade agreements might be signed and ratified.

Of all the potential deals, the EU-UK agreement would be the most important. It would be a landmark, in the sense that – perversely – it would introduce limitations on trade that did not exist prior to Brexit. Not only that. It would be important because the EU is the UK’s largest market for goods and services. And above all, because the UK is even now party to 40 or so EU free trade agreements with the very partners that it would seek to attract.

The UK government has insisted that it will not be difficult to replicate (roll over) the content of EU agreements in its own talks with foreign partners. Expert opinion is convinced that this is wildly optimistic. It points to the sensitive rules of origin of manufactured goods, which will impel the restructuring of complex supply chains. It points to the thorny problem of how to disaggregate the UK’s tariff quota rates from those of the EU27. Already, some of the UK’s intended partners, like Australia and Brazil, are loudly voicing their objections.

The only entity which so far has said it will contemplate a roll-over is the Southern African Development Community. But this is only a statement in principle and in any case involves six countries, each of which might take a different view when talks get serious.

In higher education, the UK’s posture would be aggressive rather than defensive. It might deem roll-over to be unambitious, but in the horse-trading that characterises the closing stages of a trade negotiation anything can happen. There can be no guarantee that promises made to the UK higher education lobby would be kept.

What will UK-EU free trade mean for HE?

UK higher education service providers currently enjoy the scope offered by the founding freedoms of the EU. As legal entities in a member state, they can move persons, establish, and trade across internal EU borders. Due diligence is comparatively simple. After Brexit, they will lose this facility. Their operating environment will change significantly.

Trade is the exclusive competence of the EU institutions: the European Council and the European Parliament together decide. Higher education, by contrast, is a legal competence exercised by the member states. Each of these is entitled to impose conditions on third-country ventures wishing to enter its higher education services market.

Member states can require economic needs tests; they can protect designated regions or cities; they can limit the number of foreigners employed and the volume of foreign capital invested.

In the EU-Japan free trade agreement (the Japan-EU Economic Partnership Agreement or JEEPA), both Italy and Spain will authorise the operation of degree-awarding private universities, but only when demographic needs are not satisfied by existing institutions. In Spain, this involves seeking the advice of the national parliament.

Negotiating with the EU (and with large federal systems like the United States) will require UK exporters of higher education services to become much more sensitive to internal legal boundaries than is the case at the moment. No longer will they be able to establish and franchise at will in a market of over 600 million consumers.

By the same token, the EU will have similar, albeit lesser difficulties. For higher education in the UK is devolved. There is no reason to assume that its four domestic administrations will go into trade negotiations with equal liberalising fervour. Indeed, nobody knows quite what powers will be retained or gained by the devolved administrations after Brexit. The eventual position of Northern Ireland is a huge unknown.

It is widely believed that only private higher education provision figures in trade negotiations. The General Agreement on Trade in Services (GATS) excludes services “supplied in the exercise of governmental authority … neither on a commercial basis nor in competition with one or more service suppliers”. The inference often drawn is that public sector universities need not feel concerned. But what is patently obvious is that many ‘public’ universities, particularly in the UK, operate on a commercial basis and in competition.

In the EU, higher education is regarded as a tradable service and as such falls within the scope of the Directive on Services in the Internal Market. At the same time, in its trade deals with third countries the EU now acknowledges, as it is bound to do, the right of member states to protect their higher education systems.

In its agreement with Canada (the Comprehensive Economic and Trade Agreement or CETA), the EU “reserves the right to adopt or maintain any measure with regard to the supply of all educational services which receive public funding or state support in any form, and are therefore not considered to be privately funded”.

Yet if this were a secure definition of the ‘public’, one wonders why Sweden would seek to protect itself against “privately funded educational services suppliers with some form of state support”? The fact is that the concept of a public university is notoriously insecure.

Indeed, the EU, in its proposals to reform the World Trade Organisation (WTO), has stated its wish to find a new and clearer definition of a ‘public body’. This is for reasons that have nothing to do with higher education. They relate to the need to align the GATS rules with the realities of e-commerce, as well as to defend the WTO against the unruly Trump administration.

Discussions in Geneva are ongoing. Whether UK universities are deemed private or public, and by whom, will remain a moot point for some time to come.

It is clear that viable due diligence by UK universities in respect of any international trade-related activity is a long way off. The future UK policy framework is inscrutable. Long-term financial investments at this stage could well be unwise. Better to stick with – and consolidate – all those free-standing collaborative agreements that underwrite relatively free academic mobility and the development of joint curricula. And that are based on mutual trust.

This post represents the views of the author and not those of the Brexit blog, nor the LSE. It first appeared at UniversityWorldNews.com.

Howard Davies is an independent consultant in European higher education. 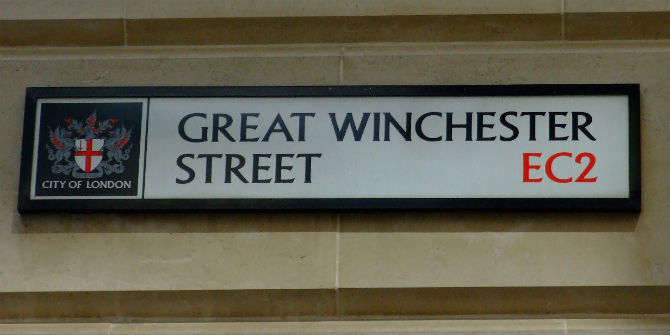 Brexit is a win-win opportunity for the City of London