They were winners in the European parliamentary elections, but now the Brexit Party is struggling. Callum Tindall (University of Nottingham) identifies Nigel Farage’s missteps.

After the Brexit Party’s victory in the European parliamentary elections in May 2019, it would have hoped to sustain its success. But many things have changed in British politics since. After the Conservatives elected Boris Johnson as their new leader, the “Boris factor” has seen a Tory bounce in the polls. Conversely, the Brexit Party has shifted from being the most supported party for a General Election in some June polls, to polling in low single figures only five months later. Johnson’s “oven ready” Brexit deal seems to have passed muster with many Brexiteers and the Brexit Party (BP), which still wants a “clean break Brexit”, has offered limited scrutiny of it. Consequently, the party’s support has fallen.

Three key issues have influenced the decline in the BP’s popularity.

These have combined to create a void of legitimacy in the party to which the electorate appears to have reacted. In the first-past-the-post system, if a party does not appear to be a credible winner, momentum can quickly shift to the major parties.

Firstly, the party appears disorganised when Farage, a key focus of party unification, is not standing as a parliamentary candidate himself. Furthermore, Farage has struggled to penetrate the televised debates, only featuring with leaders of the main parties once, hampering the party’s credibility. Other key BP actors, including potential influential figures such as Annunziata Rees-Mogg – sister of Leader of the House – are not contesting a seat. Former Southampton FC Chairman Rupert Lowe withdrew late as Dudley North candidate, citing fears of a split vote facilitating a Labour victory. More fundamentally, the majority of the BP’s recently successful MEPs are not standing. Of their 28 MEPs, only six are currently running: David Bull, Nathan Gill, James Wells, Martin Daubney, Richard Tice and Ann Widdecombe. This represents less than a quarter of their victorious candidates with proven support, indicating a lack of party focus and desire to capitalise on their success. Many of the current parliamentary candidates are inexperienced, questioning their electoral legitimacy and hampering chances of success. (Candidates such as the former Apprentice winner Michelle Dewberry may, however, boost the party’s appeal.)

Furthermore, the party’s weakness is exposed by its decision to withhold candidates in the 317 Conservative-held seats, despite claiming initially it would contest over 600 of them. This also means that they are not fielding candidates in the majority of the highest Leave-voting constituencies. In the UK’s single-member district system, this could be catastrophic for the party’s chances of electoral success. Surely the Brexit Party must appeal to the constituencies most supportive of Brexit? If the party wants to be successful, it should be ruthless in its quest for political influence. By offering the Conservatives an easier route to a majority, they also risk appearing to have surrendered – a particularly harmful charge, given  the party frames their opponents as “surrendering” to the EU.

The table below indicates the extent to which the BP’s decision to withdraw from Conservative-held seats hampers their chances of electoral breakthrough. Only two of the top ten Leave-voting areas have BP candidates. Even worse, none of the top seven are represented.

The best chance of gaining seats would likely be through a regional focus on the “Brexit belt” of the East Midlands (especially Lincolnshire) shown below. By concentrating resources on a specific area there would be more chance of success in the UK’s majoritarian system. The BP’s discourse has tended to focus on the Midlands, which this decision undermines, indicating it has abandoned its electorate. 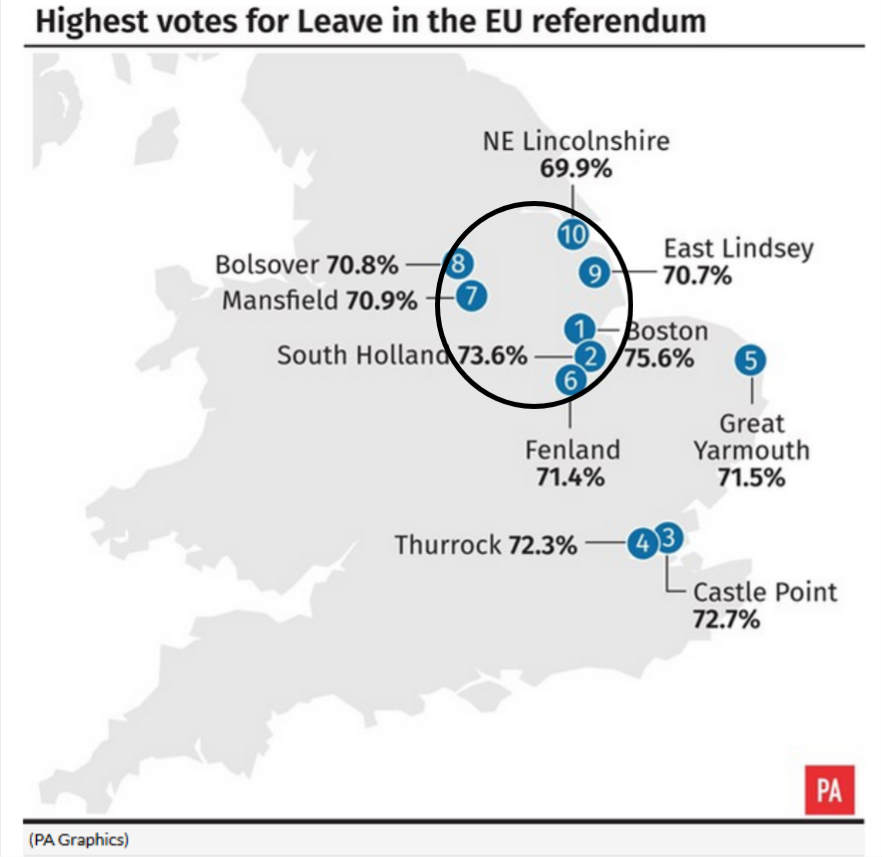 Furthermore, one might expect the BP to aim to capitalise in areas where UKIP historically performed most favourably. This is especially the case as UKIP appears to be in crisis. However, of the top ten UKIP-supporting constituencies in the 2015 GE, only four have a BP candidate. Yet none of these are in the top three! One would expect these to be fertile ground for the BP, especially under Farage. Seats that feature in both the top ten for Leave and UKIP support such a Boston would be most likely to realise a BP triumph.

Finally, by seeking to appeal to voters across the left-right spectrum, the Brexit Party’s ability to build a coherent party ideology has been limited. Its catch-all populist discourse dichotomises society into ‘the people’ against a ‘liberal elite’, alongside political binaries such as “democracy or betrayal”. The party articulates society through empty signifiers lacking clear specific representation of social groups, and its policy proposals follow suit, offering limited resolutions to national issues and without an identifiable means of improving society. Abolishing inheritance tax and free wifi on buses are unlikely to be vote winners. Where UKIP was distinct was on the issue of migration. The BP has almost entirely avoided this issue because of the contention it causes. Although this may put off voters who were encouraged to vote Leave or UKIP based on immigration. If Brexit was a cultural backlash, it would be pragmatic to capitalise on it.

Nevertheless, the BP’s success is arguably visible in the Conservatives’ Brexit shift. The Conservatives have swung further to the right to become a “Brexit Party lite” under Johnson. Even on immigration, Johnson supports an “Australian-style points system”, as Farage historically did. The BP’s distinctive appeal is therefore limited, with little policy beyond Brexit – in a General Election, where other policies matter. Whilst the Conservatives remain focused on ‘getting Brexit done’, the BP will struggle to persuade voters they are a credible alternative. In short, the party lacks identity, focus and cohesion. The breakthrough the BP hoped for election is unlikely to materialise.