Is this really the ‘Brexit election’, or do voters care as much (if not more) about other issues? Heinz Brandenburg (University of Strathclyde), Fraser McMillan (University of Glasgow) and Marcel Hanegraaff (Universiteit van Amsterdam) tested the relative importance of Brexit vis-a-vis health, education and the environment. They found that Labour supporters are less attached to ensuring the party fulfills its pledges on Brexit than Conservative and Lib Dem voters.

After the false start two years ago, are we finally experiencing the “Brexit election”? In many ways, it seems so. The Prime Minister has used his core slogan, “Get Brexit done”, in around half of his tweets throughout the campaign; a dedicated Brexit Party is contesting hundreds of seats; and the Liberal Democrats are campaigning to prevent Brexit altogether, with a manifesto entitled “Stop Brexit”. A challenge to this single-issue framing comes from the Labour Party, whose manifesto does not prioritise Brexit but instead contains a raft of radical policy proposals with a strong focus on public spending in health, education, the environment, and social welfare. Labour has bet heavily that Brexit is a secondary concern to these issues among enough voters.

So how preoccupied are voters with Brexit, and the major parties’ positions on it? According to YouGov, throughout 2019 about two-thirds of voters have consistently named Brexit as the most important issue facing the country. Importantly, this has changed little since the campaign officially began in early November. More specific questions about which issue matters most to voters in this election also tend to show Brexit well ahead of other policy areas, though polls that invite respondents to name multiple issues have shown health (or the NHS) and Brexit more or less neck and neck. This suggests that Brexit is bundled together with other issues in the minds of some voters.

The idiosyncratic nature of the Brexit issue presents researchers with an opportunity to gain insight into how election pledges play into the electoral calculus of voters, especially in relation to one another. The study of election pledges is a fast-growing field, with plenty of evidence accumulating about the impressive rate at which governing parties fulfill in office what they promised during campaigns. Evidence about the impact of perceived pledge fulfillment on voting in subsequent elections, and voter perceptions about the relative importance of different election pledges, is also starting to emerge. What is largely missing, however, is research into the impact of pledges at the time they are made. Do pledges matter to voters, and how differently do they matter?

The 2019 General Election provides a neat test case for these questions. Two of the three  largest parties nationally (Conservative and Liberal Democrats) emphasise one issue (Brexit) and one pledge (“get it done” and “stop it”, respectively) over everything else, despite having published a broad agenda comprising dozens or hundreds of specific pledges on other issues in their manifestos. The other main party (Labour) has tried to move the debate on to other issues during the campaign, especially those emphasised most in their lengthy manifesto. As part of an ongoing study, we get at our research questions by investigating whether parties’ promises on Brexit drown out other pledges made during the campaign.

Our approach to studying the relative dominance of the Brexit issue and related pledges is a survey experiment. This past weekend YouGov fielded a survey with 1,632 respondents containing our “split-sample” experiment. Our sample only included English respondents who indicated an intention to either vote for the Conservatives, Labour or the Liberal Democrats. One half of our sample was asked “to think beyond Brexit” and to tell us which of three real-life policy pledges (one each on NHS, education and environment) their party would have to fulfill in government for them to consider voting for the party again. The other half of the sample was asked the same question but offered the Brexit pledge in addition to the others.

We selected pledges that appeared prominently in manifestos and whose fulfillment at the end of the parliamentary term would seem clearly measurable.

Our selected Tory pledges were

• Brexit: “We will leave the European Union in January”
• Health: “Between 2018 and 2023, we will have raised funding for the NHS by 29 per cent”
• Education: “Invest an extra £14 billion in funding for schools”
• Environment: “Set up a new independent Office for Environmental Protection”

• Brexit: “Stop Brexit and stay in the European Union”
• Health: “Raise £7 billion a year for spending on the NHS and social care by putting 1p on income tax”
• Education: “Employ an extra 20,000 schoolteachers”
• Environment: “Set a new legally binding target to reduce net greenhouse gas emissions to zero by 2045”

The idea of the experiment is to observe how the relative importance of other issues/pledges changes once we introduce Brexit, and how that effect differs between voters of different parties. In other words, to determine whether or not voters themselves perceive this as the much-discussed “Brexit election”.

Table 1 below reports the percentage of respondents who stated that their party would need to fulfill the respective pledge across these four issue areas for them to consider voting for the party again. We see that when asked to “think beyond Brexit”, 70% or more of voters of all three parties said that their party’s NHS pledge would be crucial for their future support. However, when also asked to consider the Brexit pledge, that number reduced by 20 percentage points among Liberal Democrat voters, by 15pp for Conservative voters and by 10pp for Labour voters.

Labour voters are the only ones who consider the pledge for more NHS funding more important than their party’s Brexit pledge (to hold a second referendum). That could of course either reflect their different issue priorities or the ambiguity of Labour’s Brexit pledge. There are much smaller effects on the importance of the education and environment pledges, which are generally of lesser salience to all voters. The only apparent exception is the Liberal Democrat pledge to introduce binding targets for greenhouse gas emissions, which retains its salience and almost catches up with the NHS pledge when Brexit is introduced.

So on this reading, Brexit either matters more for Conservative and Liberal Democrat voters, or their more directional Brexit pledge carries more weight than the Labour pledge. But other issues do continue to play a role. Fifty-seven percent of Conservative voters and half of Liberal Democrat voters still want their party to deliver on the NHS, irrespective of the outcome of Brexit. Moreover, Labour may actually be on to something by prioritising issues besides Brexit, as to their voters it is not even the most important issue they have to fulfill.

A more restrictive test of the dominance of the Brexit issue for the voters of these three parties is to identify the proportion of their electoral support that prioritises only their Brexit stance and nothing else. For this, we restricted analysis to the half of the sample that was asked about all four pledges and calculated the proportion of voters for each party who only mention fulfillment of the Brexit pledge, or the health pledge, or both as necessary for the party to secure their future support.

As we can see from Figure 1, both the Tories and Liberal Democrats have a considerable minority of supporters (30% and 25%, respectively) who only care about their promise to get Brexit done or to stop it. Only 10% of Labour voters are in it purely for the delivery of a second referendum. There are indeed more Labour voters whose future support could be secured by only delivering on their NHS spending promise (17%). But the largest group for all three parties are supporters who are keen on delivering on both Brexit and NHS spending.

Figure 1: Per cent voters prioritising Brexit, NHS or both 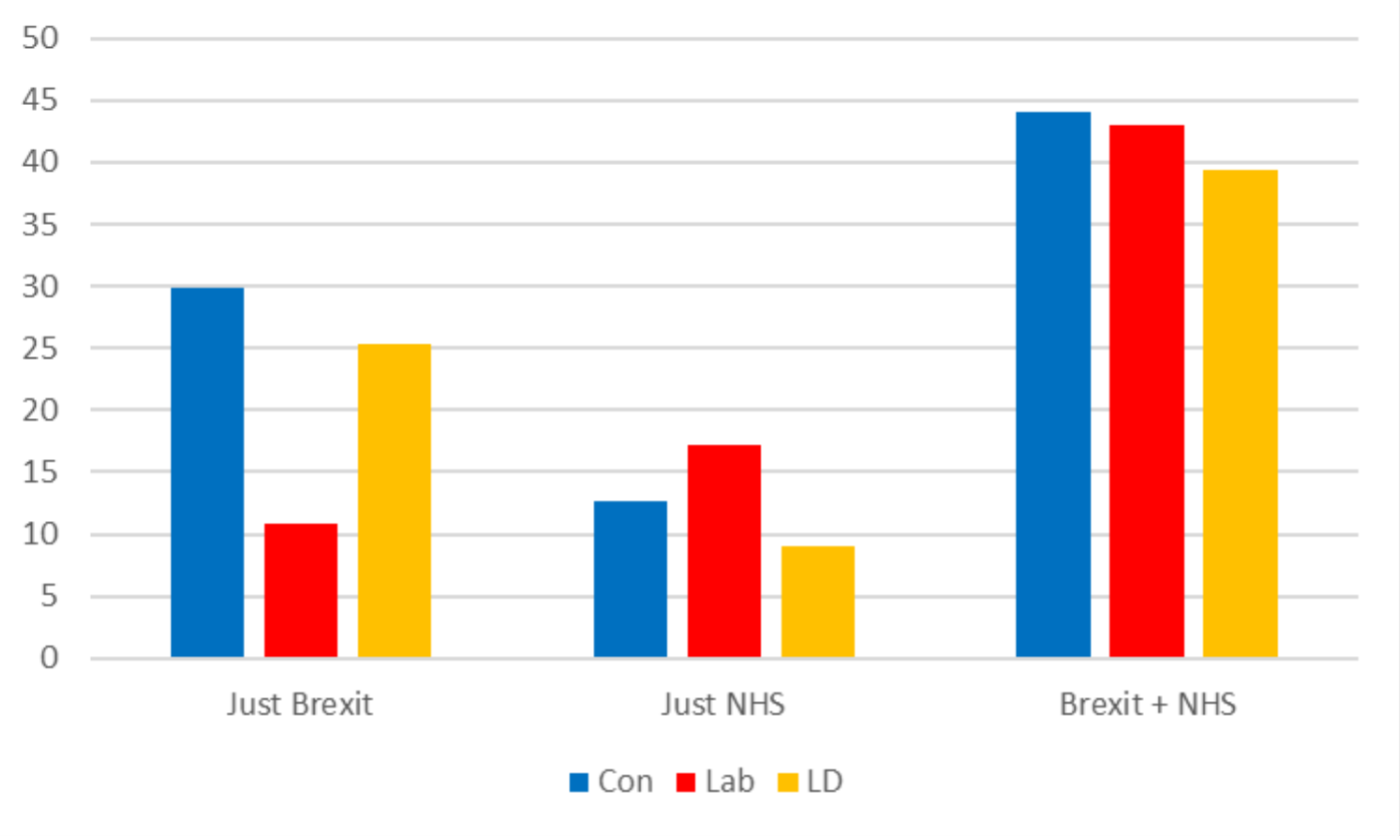 So is this the Brexit election? In many ways yes, and it will almost certainly be remembered as such. But this study highlights that political leaders of all parties cannot simply focus on Brexit and ignore other issues. They have to highlight their commitment to other promises to make sure they do not lose their constituents by emphasising Brexit alone.

Marcel Hanegraaff is an Associate Professor in Political Science at the University of Amsterdam.

Fraser McMillan is a postdoctoral Research Associate at the School of Social and Political Sciences, University of Glasgow.