A new book about Brexit tries to promote understanding of ‘the other side’ and bridge divisions between Remainers and Leavers. Published by GraphicDesign&, The Other Side: An Emotional Map of Brexit Britain looks at the role of graphic communication in the campaigns and gives a voice to both sets of voters. In this exclusive extract, GraphicDesign& co-founders Rebecca Wright (Central St Martins, University of the Arts London) and Lucienne Roberts (Universty of Southampton) introduce the book and we juxtapose some of the images and words it contains.

The Other Side: An Emotional Map of Brexit Britain was born of our deep frustration with the adversarial and divisive rhetoric that has dominated politics and the press since the referendum. We set out to counter it, to get beyond the cliched stereotypes of Remainers and Leavers, by representing the diversity of views held by individual voters and giving people space to explain the reasons for them.

We include 26 Leavers and 24 Remainers, to reflect the referendum result. We asked that each tell us a little of their life story, how they voted and why. We asked them all to share one loss and one gain they could imagine as a consequence of the 2016 result. Perhaps naively, we thought this process might prompt empathy for ‘the other side’, but often it did not. Instead, it revealed the huge range and depth of emotion felt by voters.

We wanted to give Remain and Leave contributors equal billing, so neither comes first. Instead, the book has two beginnings and no end, with the ‘sides’ meeting in the middle. 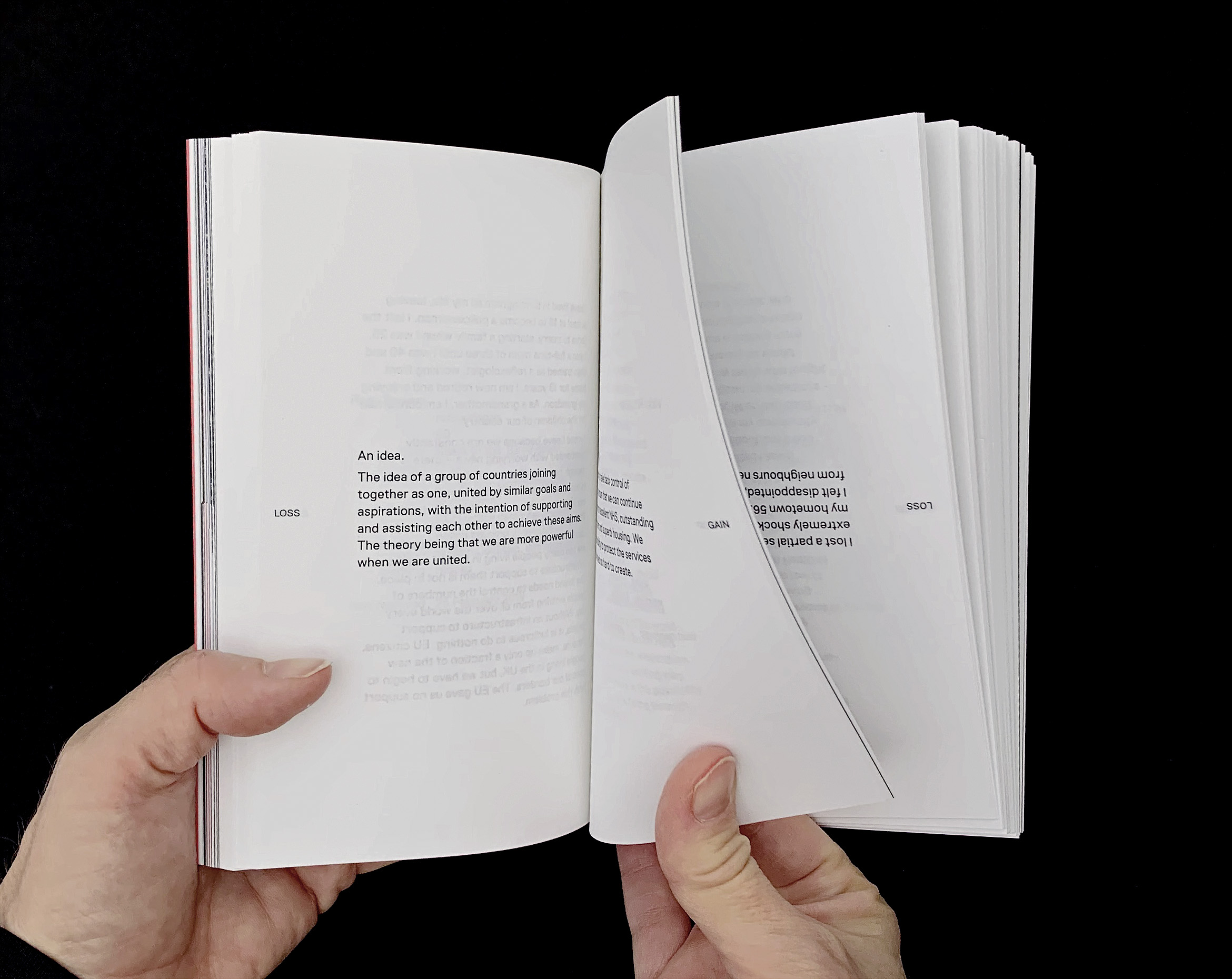 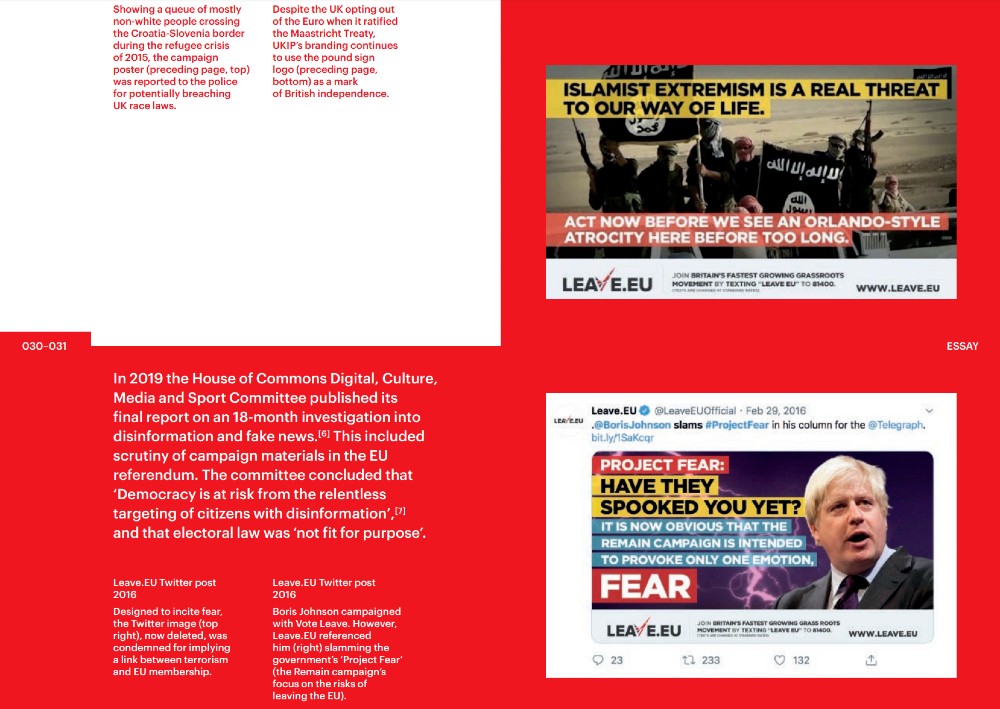 ‘I have been a Leaver for at least 25 years, because I attribute to the EU’s lack of democracy and its drive to federalism the resurgence of extreme nationalism, antisemitism and breaches of human rights across Europe.’ (Baroness Ruth Deech, academic, lawyer, bioethicist, politician, Oxford) 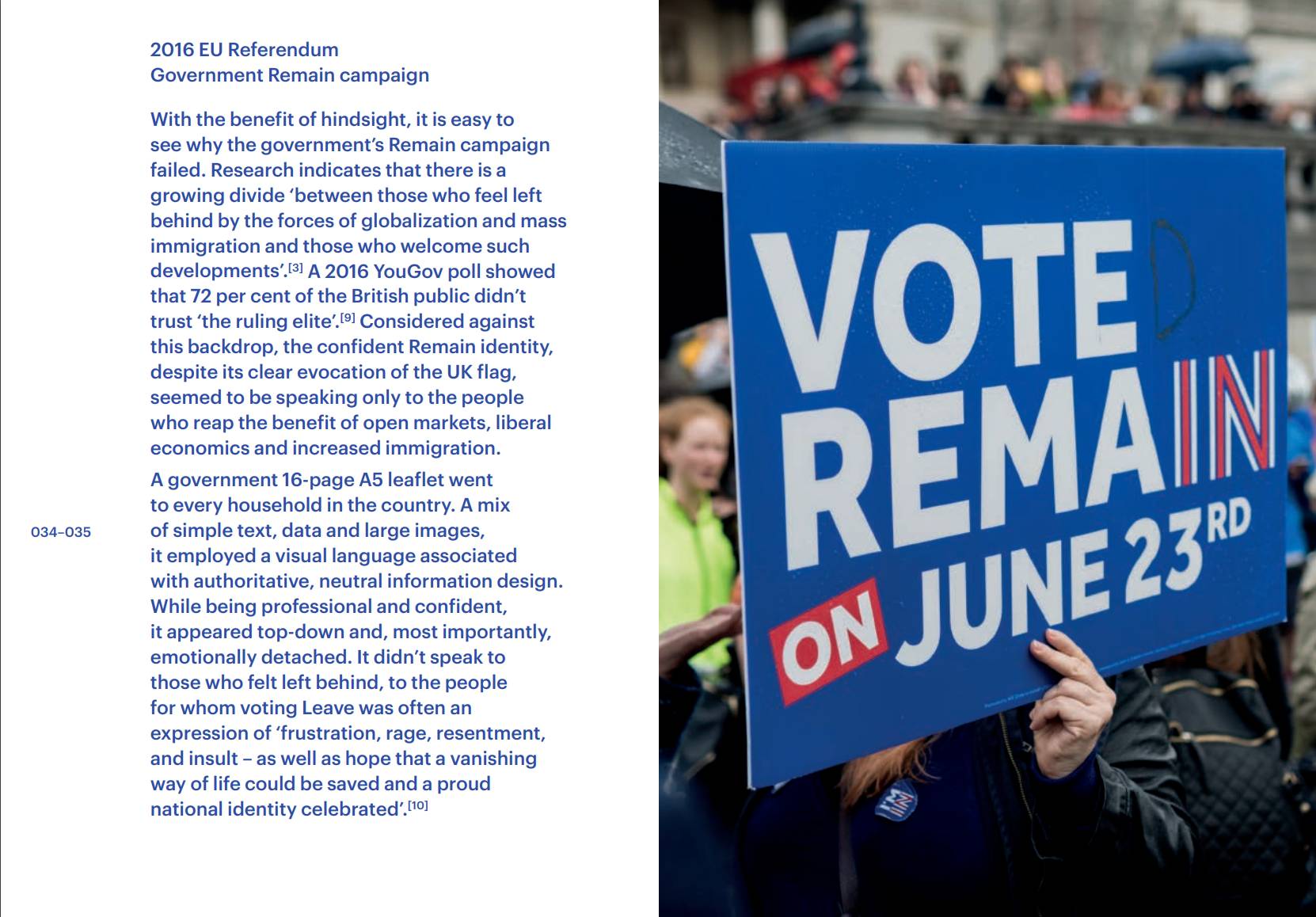 Britain Stronger In Europe campaign, 2016. Designed by branding experts North, the official Remain campaign identity played on the word IN and referenced the UK flag. It was accomplished, but failed to connect emotionally with voters. Image: Ed Everett

‘Cutting ourselves off seemed very short sighted… On top of a decade of cuts in public services, a small group of wealthy individuals from the Leave campaign are cognitively dissonant when it comes to Britain’s financial future – still insisting that the rest of the world will want us to trade with them and welcome us with open arms.’ (Darren Bray, black cab driver, London) 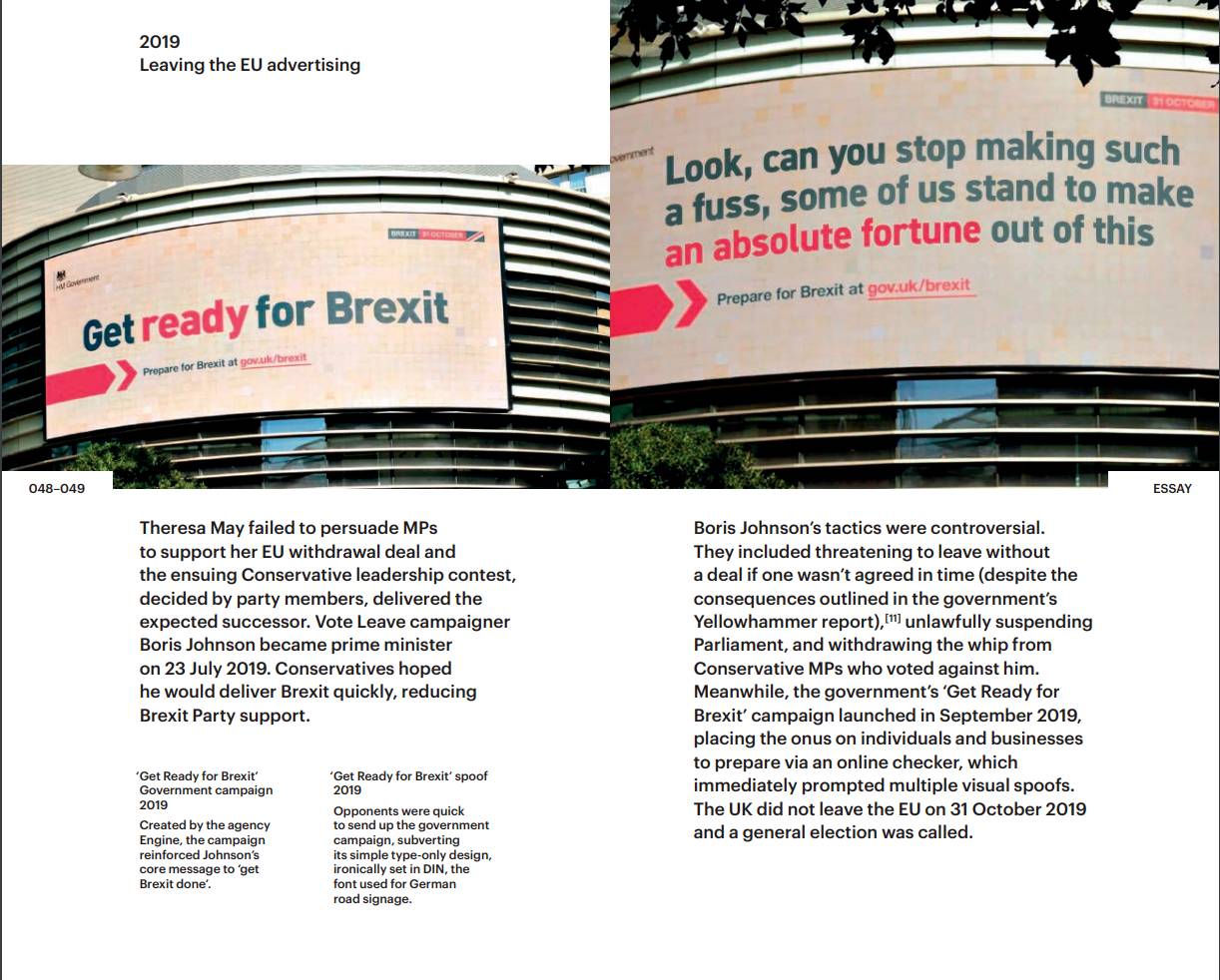 ‘Get ready for Brexit’ government campaign, 2019. Created by the agency Engine, the campaign reinforced Johnson’s key message to ‘get Brexit done’. Image: GOV.UK

‘I went out on the trawlers with my dad at 13. I loved fishing. I still love it… but people are basically skint here. I think that if someone is struggling, then someone, somewhere else, is benefiting as a result… I voted Leave and all my family did too. Our vote was a protest against the government.’ (Darren Kenyon, inshore fisherman, Grimsby) 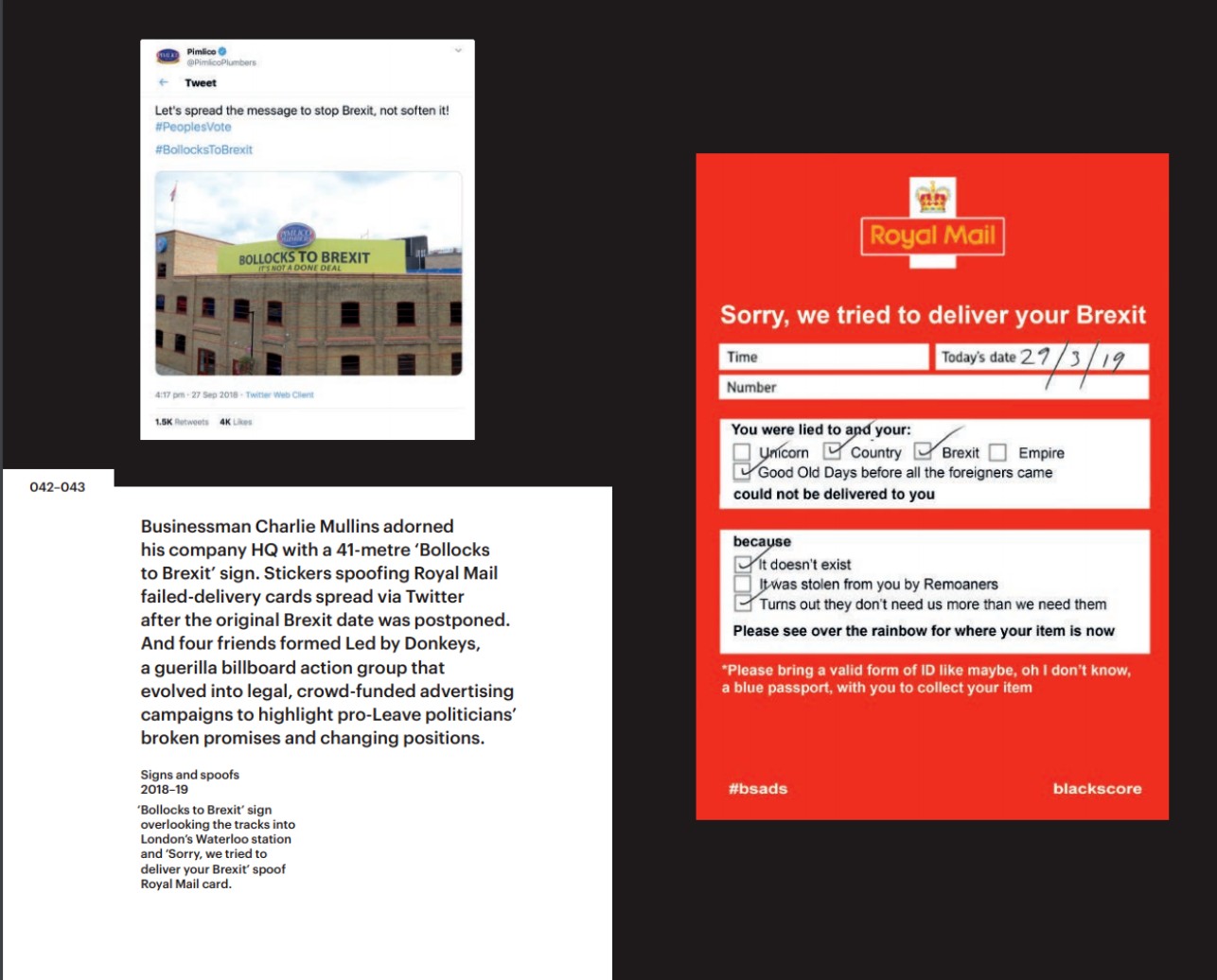 ‘The EU is a fantastic concept that has brought so many positives to Wales, particularly via funding and grants… Brexiteers aren’t looking at the wider picture. Not all of us live in thriving cities. I don’t believe ‘our’ politicians will follow through and deliver the goods. They’re shit – and have been for 20 years.’ (Ioan Gwynedd, supermarket manager, Bangor) 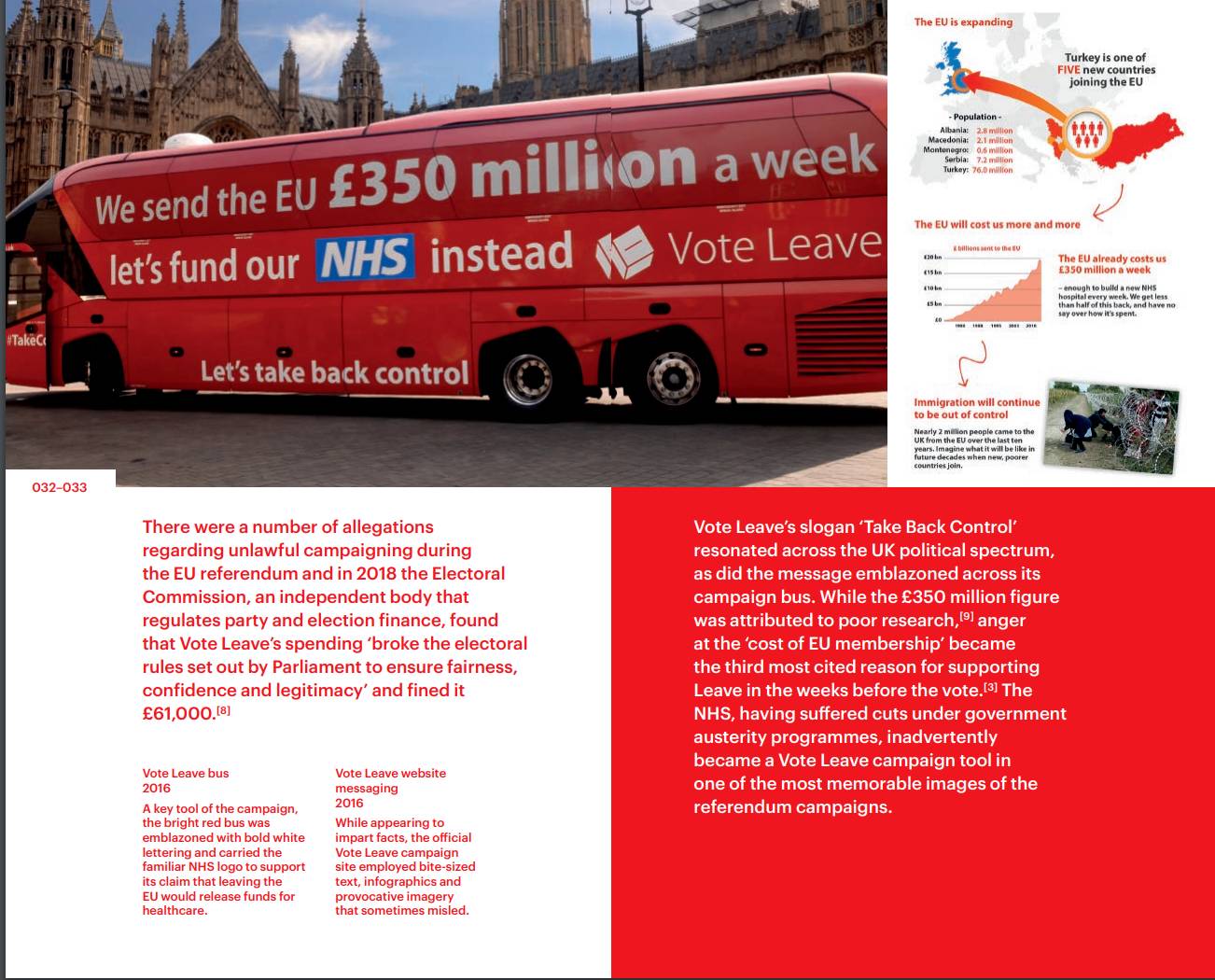 Vote Leave bus, 2016. A key part of the campaign, the bright red bus was emblazoned with bold white lettering and carried the familiar NHS logo to support its claim that leaving the EU would release funds for healthcare. (Image copyright Greenpeace)

‘I have a Spanish background so many are surprised that I voted Leave… European funds for regional development have failed to improve the south’s impoverished labour market and, when things have gone badly, as in Greece, there has been a brutal lack of solidarity. The EU has a privatisation and market-led economic agenda that has failed millions of working-class Europeans.’ (Michael Arrastia, software developer, Bristol) 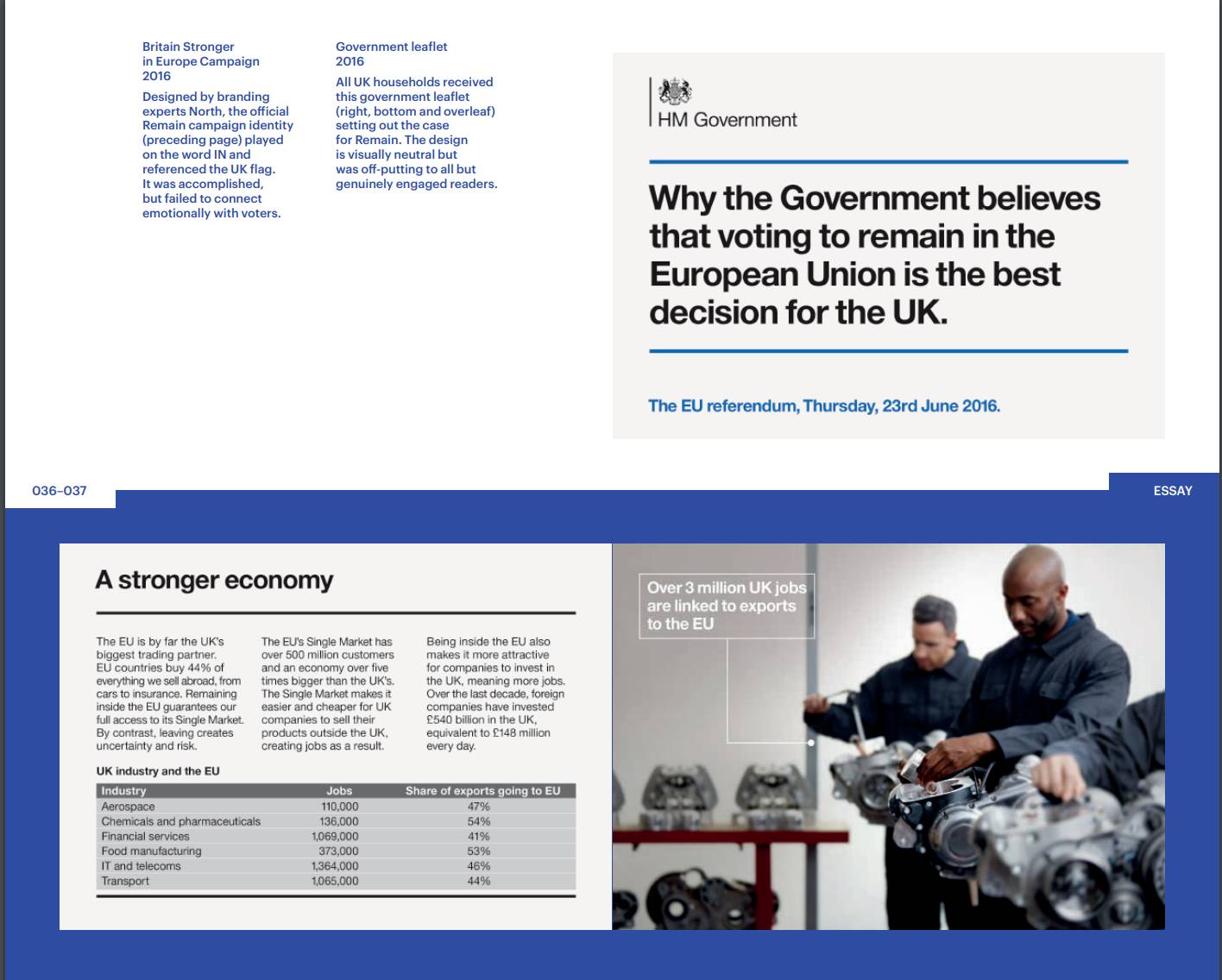 Government leaflet, 2016. All UK households received this government leaflet setting out the case for Remain. The design is visually neutral but was off-putting to all but genuinely engaged readers. (Image: GOV.UK)

‘In 2016, though the EU was far from perfect, I liked the idea of a multicultural world… This focus perhaps sounds idealistic, perhaps unrealistic, but I believe that we should seek justice and acceptance for all people from all corners of the world.’ (Denise Wilson, retired teacher, psychotherapist, Sunderland)

It is important to note that we began this project in early 2019, with contributions submitted before the first Brexit deadline of 29 March 2019. The book is therefore a snapshot of a very particular time in British history. Yet despite all that has happened since, our contributors stood by their answers when they checked their proofs in the autumn of 2019.

The Other Side: An Emotional Map of Brexit Britain is edited by Lucienne Roberts and Rebecca Wright and available from GraphicDesign&.

Lucienne Roberts is a Visiting Professor in Graphic Communication at the School of Engineering, University of Southampton, director of design studio LucienneRoberts+ and co-founder of GraphicDesign&amp;.

Rebecca Wright is Dean of Academic Programmes at Central Saint Martins, University of the Arts London and a co-founder of GraphicDesign&amp;.