“Can constant drastic changes in strategy be compatible with sustained growth?” This was the question we put to a panel of founding CEOs of growth companies and a group of MBA students at Harvard Business School last month.

Growth is one of the main challenges faced by executives. “Today’s business environment requires managers to adapt their business models on an ongoing basis. Fast-paced dynamics bring a constant demand for firms to make changes to their strategies in order to achieve sustained revenue growth”, as Harvard Business School Professor Thales Teixeira states in the foreword of our book Revenue Growth: Four Proven Strategies. What do these leaders do to sustain growth in this fluctuating business atmosphere? 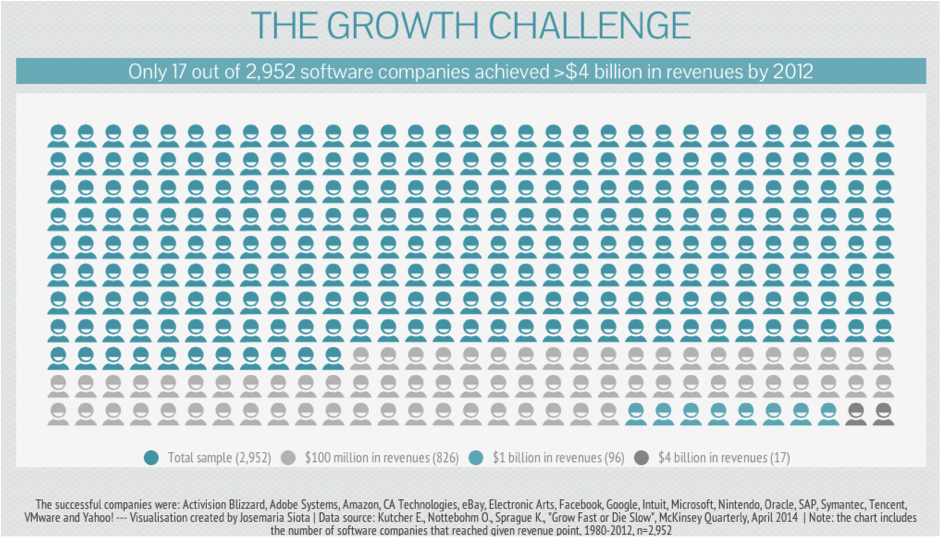 In our research, we reached out to 780 executives of high-growth companies in 32 countries — including Amazon, Facebook, Google, LinkedIn, PayPal, Spotify, WhatsApp and more. We can summarise our findings in three principles:

Few are the winners at the growth competition – for instance, only 17 out of 2,952 software companies achieved more than $4 billion in revenues in 2012. Moreover, in early stages, most tech startups die around 20 months after the last funding round, stated Peter Weed, global general manager of the growth tech practice at McKinsey & Company.

The reason? “Often, startups don’t have the time or the money to validate and adapt their business models – thus, these companies should prioritise learning and cost metrics”, as explained by Naman Agarwall, business development manager at Amazon India.

Before the iPhone release, no financial analyst would have predicted 1.3 billion smartphone shipments in 2014, with a growth rate of 29 percent compared to the previous year. Ana Maiques, founding CEO at Neuroelectrics, describes this as “the impossibility of a perfect foresight”, especially in disruptive sectors, in which no reliable data is available.

Therefore, it is “the right combination of strong analytics and creativity that makes the design of new opportunities possible” says Patty Cox, a former LinkedIn executive. Otherwise analysing past data without testing new solutions may lead executives to lose growth opportunities.

John Harthorne, founding CEO at startup accelerator MassChallenge, has created about 5,000 jobs and raised over $947 million in funding. His take: three out of every four startups fail, and a solid 42 percent of those failures result from a gap between what entrepreneurs assume the market wants and what it really wants.

As a consequence, founding CEOs should “validate their business assumptions as soon as they can”, indicates Elias Campo, a former WhatsApp executive.

In conclusion, we learnt from growth leaders that in order to achieve sustained growth in such a volatile arena, we should validate further novel opportunities of growth through a quicker and more frugal approach, by combining not only economic metrics, but also learning metrics.

Josemaria Siota is the Director at Simastec Consulting and collaborates in research projects with IESE Business School. He co-authored “Revenue Growth: Four Proven Strategies” (McGraw-Hill). He is a former Deloitte consultant. Follow him on Twitter @josemariasiota

Luiz Zorzella is the Director at Amquant. He is a former McKinsey consultant and former JP Morgan investment banker. He co-authored “Revenue Growth: Four Proven Strategies” (McGraw-Hill). Follow him on Twitter @lzorzella