The Basel Committee on Banking Supervision (BCBS) has designed complex rules for defining sufficient capital at internationally active financial institutions. Pillar II of the Basel Accord requires national supervisors to assure continuous compliance with capital standards, which require a minimum ratio of the book value of equity capital to a bank’s risky assets. An adequate Tier 1 capital ratio would stand at 5% or 6%. At the end of 2007, the vast majority of EU banks and bank holding companies easily complied with minimum capital requirements. Unfortunately, the book value of equity can substantially understate a bank’s ability to absorb further losses.

How could a system that defined and monitored bank capital positions so carefully have permitted such catastrophic losses? Although there are many reasons, one major cause was the supervisors’ reliance on book equity measures, which do not capture the firms’ true ability to absorb losses. Financial accounting reports follow either Generally Accepted Accounting Principles (GAAP) or International Financial Reporting Standards (IFRS). Combined with regulatory accounting rules, either accounting standard provides managers with discretion to overstate assets and manage earnings and capital. There is also evidence that some banks may understate their risk-weighted assets. Banks’ incentives to manipulate accounting valuations are strongest as their capital ratios approach mandated minima. Huizinga and Laeven provide evidence that banks used their accounting discretion during the financial crisis to understate impairments of their real estate loans and mortgage-backed securities (MBS), and that accounting discretion was more pronounced for large financial institutions.

In our study, we estimate annual default probabilities for the largest 25 European banks over the period 1997-2011, using the method of Ronn and Verma (1986) to estimate each bank’s asset value and portfolio return volatility (standard deviation). We find that some of the sample banks are insolvent at year end, in the sense that their assets are worth less (in market value) than the face value of their liabilities. Figure 1 indicates that insolvencies became especially common in 2008, and they did not disappear very quickly in subsequent years. 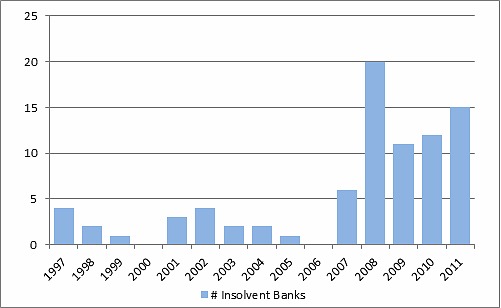 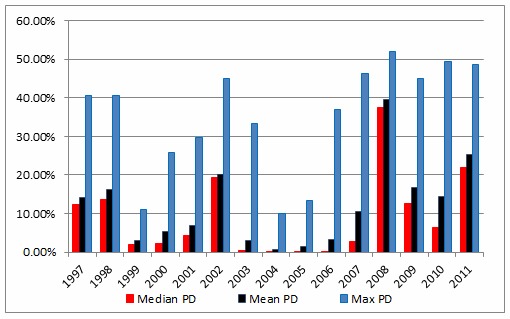 Table 1: Banks with Multiple Years of High Default Probability (PD). An “offense” is a year-end at which a bank has a probability of default higher than the values indicated at the top of each column. 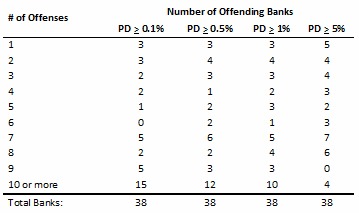 How much added capital would have been required to maintain low default probabilities for large European banks over the past fifteen years? To answer this question, we hypothesize a “Timely Recapitalization” policy, which computes how much additional capital banks should have kept in order to maintain low one-year default probabilities at each year-end. Unsurprisingly, banks would have required a massive amount of additional capital during the crisis to reduce the value of government guarantees very much.

Even before the crisis (1997-2006), Timely Recapitalization would have reduced the average bank’s government guarantee value from 7.4 percent to 0.31 percent of equity market value. We conclude that book-valued capital ratios and regulatory inertia combined to permit large European banks to be, and to remain, undercapitalised for long stretches of time. Supervisors have not assured that large European banks continuously maintain market-valued equity cushions that place their solvency beyond question.

What does this state of affairs imply for “better” capital regulation in the future? Orderly resolution and “bail in” debt (which is also called “total loss-absorbing capacity”, or TLAC) have prominent places in current policy circles. Unfortunately, the need for supervisors to declare a bank “non-viable” in order to set off such a re-organization relies crucially on the same type of supervisory discretion that has performed poorly in the past. We must find an alternative to supervisory discretion if capital regulation is to become an effective regulatory process. The legal/regulatory focus on book capital measures makes it difficult for supervisors to force equity additions in advance of a possible run. The resulting pressure on governments to support their banks has been expensive, but is probably unavoidable under the present regulatory structure.

As one alternative, supervisors might think in terms of maintaining adequate equity market value to protect bank claimants from failure. Contingent capital bonds that convert automatically on the basis of the issuing bank’s equity market value might be a more reliable mechanism for assuring continuous solvency. Conversion based on equity’s market value raises some important issues about trading and price efficiency, but there are suggested methods to minimize or eliminate many of those issues.

Critics have also asserted that market assessments of bank equity value can change quickly and needn’t be accurate. Yet we know that book equity measures can also misrepresent a bank’s ability to absorb further losses, and book value distortions are probably biased upwards and become worse when the bank’s true condition has deteriorated. Finally, regardless of their accuracy, market assessments drive both equity values and depositor runs. Some method for incorporating market valuations into bank capital regulation seems like a very attractive policy option.

Mark J. Flannery is the Chief Economist at the U.S. Securities and Exchange Commission, on leave from his faculty position at the University of Florida. The Securities and Exchange Commission, as a matter of policy, disclaims responsibility for any private publication or statement by any of its employees. The views expressed herein are those of the author and do not necessarily reflect the views of the Commission or of the author’s colleagues and the staff of the Commission.