How can countries protect their banks against international contagion?

They need to distinguish the unique type of contagion in each crisis, write Mardi Dungey and Dinesh Gajurel

How can countries protect their banks against international contagion?

Financial crises which turn global pose risks for domestic banking sectors, sometimes escalating to fully-fledged domestic banking crises. Regulatory policy aims to reduce the probability of the spread of risk to the domestic financial sector and to prevent banking crises during periods of stress. Doing this effectively requires an understanding of how crises spread — what are the transmission mechanisms, and which of these is likely to be most important in influencing the outcomes for the banking sector.

Our recent research looks at the experience of the stressful period of 2007-2009 to examine the empirical evidence for the transmission of the crisis across the 54 global banking centres listed in Table 1. We find significant evidence of the stress in one jurisdiction influencing another via financial contagion.

While contagion is a common term in the popular literature, being precise about its meaning and possible channels of crisis transmission is important in understanding how the transmission might be mitigated. We propose a framework which identifies four different contagion mechanisms. The first two capture changes in the global market:

The second two mechanisms capture changes in how the source of the shock affects markets in other jurisdictions:

In our work, the 2007-2009 crisis is represented as originating with the US banking sector and we examine the effect of these four channels on 53 other markets around the world.

The results show that the majority of the banking markets experienced changes in their relationship with global risk, with shift contagion present in almost all cases. Figure 1 gives a Venn diagram representation of the results, with each circle representing evidence for the three remaining types of contagion. The majority of countries experienced systematic and volatility contagion from the source shock in the US. Idiosyncratic contagion effects are present for 30 of the markets examined. The countries indicated in red text in the diagram not only had evidence of contagion but also experienced a domestic banking crisis. We compare the results with those published by Laven and Valencia (2012) about the GDP loss associated with these banking crises and conclude that countries experiencing systematic and idiosyncratic forms of contagion suffered on average a 30 percent loss of GDP during the associated crisis. 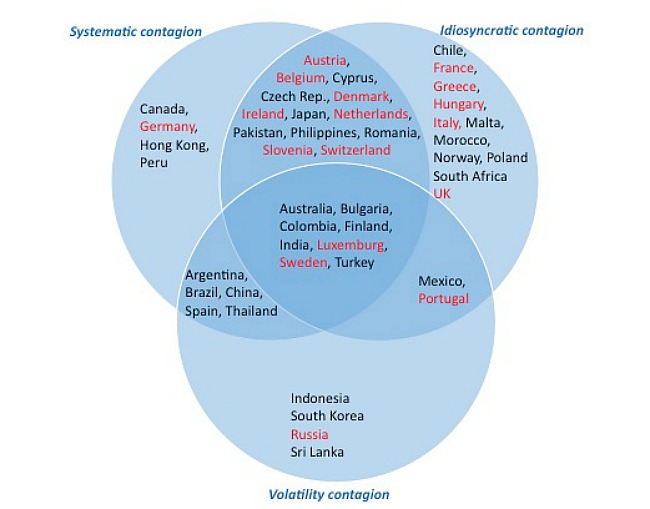 These results beg the question as to which channels of transmission policy makers should focus on to prevent crises originating in different geographic areas from becoming fully fledged domestic banking crises. The usual advice is to run well-founded macroeconomic policy, with a relatively concentrated banking sector, subject to strong regulatory capital and focused on retail banking income in preference to other sources.

By relating the data on individual country banking crises with our results, a simple collation suggests that the presence of systematic and idiosyncratic contagion channels is associated with these crises. Regression analysis confirms the usual effects of banking capital, concentration and focus on retail activity on reducing the probability of a banking crisis. It also shows a significant effect of idiosyncratic transmission. Contagion from the crisis-originating centre significantly increases the probability of a crisis in the recipient country by 37 percent. The effect of systematic contagion identified in the paper is not significant. However, this does not necessarily mean we should focus less on this type of transmission – it may simply represent that regulation already does this fairly well. Rather the results suggest that we can make additional gains by attempting to mitigate the particular transmissions which are unique to each crisis.

The clear question which arises from this research is to identify what forms of policy interventions might be effective in reducing these contagion effects. These would target policy responses tailored to shutting down the effects of transmission uniquely associated with the crisis origin, rather than to the systematic and volatility effects which seem to be relatively well absorbed in the current environment. Some examples which may fit this category include short-sales restrictions on financial shocks, and capital flow restrictions, both of which are widely regarded as having had some success in containing the geographic spread of crises in the past. Other innovative approaches are needed to provide the regulatory authorities with a wide-ranging armament with which to meet the challenges of future crisis events.

Mardi Dungey is Professor of Economics and Finance at the University of Tasmania. She researches the empirical transmission of financial crises and contagion. Her work features novel solutions to detecting and measuring the effects of financial market shocks transmitted across the globe and the risks inherent in the financial sector for the rest of the economy.

Dinesh Gajurel is a lecturer researching banking and financial economics. He is currently affiliated with the Tasmanian School of Business and Economics at the University of Tasmania, Australia. This research forms part of his PhD studies.