When the business community unites as a lobbying force

Among different sectors, the financial industry gets the most lobbying support, find Kevin Young and Stefano Pagliari

When the business community unites as a lobbying force

The capacity to build alliances with other firms and to stymie the competition from rival groups is a key aspect of business activity. However, the competition across different groups is not limited to the marketplace. It often extends to the political arena. Business activity is the target of many contemporary regulatory policy efforts. The reverse is also true: firms frequently intervene and deploy significant resources in the attempt to influence the design and implementation of these policies. Similarly to the marketplace, the field of politics and policy is a field of interaction that structures competition, and the capacity of business groups to build coalitions is key to their success in influencing regulatory policies.

Business rarely speaks with one completely unified voice, and there are very real constraints on getting the business community to ‘act up’ through an advocacy coalition. This is especially challenging when government policies are not just about the general business environment – things like taxes, infrastructure, and inflation – but about very specific regulatory interventions, such as safety standards for drug companies, pipeline spill assessment guidelines, or bank leverage ratios. For instance, why would an agribusiness mobilise to support the pharmaceutical industry when new costly pharmaceutical regulations are being introduced? Or why would an oil company support the interests of a car manufacturer when auto safety rules are being tightened? In our study we investigated when corporate groups reach across the sectoral divide and stand up for the fate of firms in other sectors, in what we call cross-sectoral “business unity”.

The concept of ‘business unity’ can be broken down in two main component parts: the extent to which corporate groups from sectors that are not directly targeted by a given regulatory policy mobilise, and the extent to which those preferences align or diverge from those of the regulated industry (see Figure 1, based on Pagliari & Young, 2014). When a sector targeted for regulation has many business groups from other sectors (“outsiders”) mobilising, with aligned preferences, we consider this a level of ‘strong unity.’ Conversely, when a regulated sector has many outsiders mobilising but these outsiders express divergent preferences to the regulated industry, we consider this a situation of ‘business conflict’.

To analyze which sectors are the beneficiaries of the solidarity from other segments of the business community, we compiled a large dataset comprising comment letters sent by different firms and business organizations in response to formal consultations launched by regulatory agencies regarding specific regulatory proposals. These responses provide us with a relatively systematic ‘trace’ of what actors tend to mobilise in response to different regulatory policies as well as what their specific position are.

In total we collected 19,597 comment letters in response to 630 different policy consultations in Australia, Canada, Switzerland, the United Kingdom and the United States, as well as regulatory consultations held by various European Union authorities. We selected regulatory proposals directed towards the five important sectors of the economy: energy, pharmaceuticals, agriculture, telecommunications, and finance.

We coded the sectoral identity of the business groups responding to these consultations as well as their preferences on a simple but standardised basis in order to generate two key dimensions of interest: the extent to which ‘outsiders’ mobilise over a given regulatory area, and the degree to which their preferences of these outsiders diverge from the regulated industry. Figure 2 plots the results of this analysis. 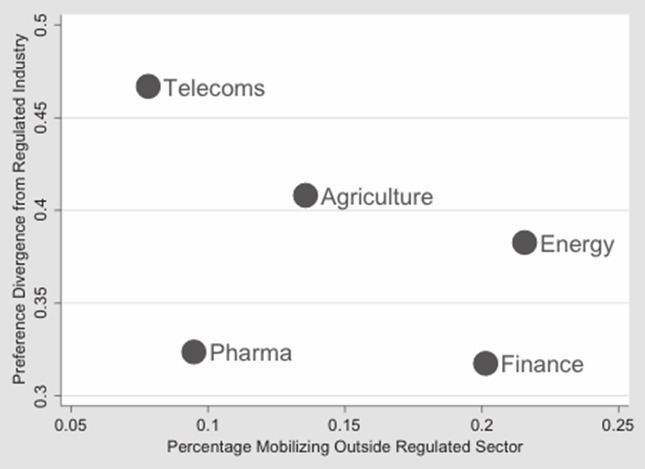 Our results suggest that while the amount of support that business groups receive from other sectors differs significantly across sectors, one sector stand-outs: the financial industry. In particular, our findings reveal that when the financial sector is being regulated, the broader business community outside the financial sector is both more likely to mobilise and to express preferences that are highly concordant with the preferences of the financial sector itself. To use a stylised example, when bankers are faced with a new regulation, manufacturers, commodity firms, and peak business associations come to their aid, writing letters, meeting with policymakers, and making threats more frequently than when other sectors are being targeted for regulation.

While the notion that the financial sector occupies a unique position within the broader business community has been embedded within political economy literature for nearly a century, our study illustrates a mechanism through which this economic importance translates into an important form of political influence. The support that the financial industry receives from the rest of the business community is part of the solution to the puzzle of why the financial industry is often capable to ‘punch above its weight’ in the political arena.

Stefano Pagliari is a Lecturer in the International Politics Department at City University London.  His research interests include the political economy of financial regulation, financial industry lobbying and international regulatory institutions in finance. He tweets at @SPagliari

Kevin Young is Assistant Professor in the Department of Political Science at the University of Massachusetts Amherst. His research focuses on the role of interest groups in financial regulation and elite networks.