Despite the important role professional money managers play in financial markets, and decades of academic study, relatively little is known about how they generate investment ideas. Some choices are likely driven by information gathered through connections to particular firms. Previous research has shown that managers invest in companies headquartered nearby and in companies to which they are linked through school networks. They also choose stocks based on their political ideology and stocks of companies with which they are merely familiar.

But people, as Aristotle famously noted, are social animals, so we set out to determine whether fund managers trade on information garnered through their interactions with managers at other funds.

Of course, we can’t know which fund managers know each other, let alone those who may talk about favourite stock picks. But we are able to use public records data to see where fund managers live, and identify pairs of managers who live very close to each other — that is, we can identify neighbours. Managers who are neighbours are more likely to have an opportunity to meet —perhaps at a local park, school, or country club — and subsequently become acquaintances or even  friends. We can then look for similarities in the trades of these neighbour managers, and compare them to the trades of other fund managers of similar funds to see if being neighbours has an effect on trading behaviour.

We use data on the residential addresses of just over 2,000 fund managers during 1996-2010. We classify a pair of managers as “neighbours” if they live within a short distance, where the distance depends on the population density of the area. (So fund managers in Manhattan must live in adjacent buildings to be neighbours, but those with large estates in Connecticut may be a few miles apart.) Managers have homes and vacation properties across the country, and we find at least some neighbours in many areas, as shown in this figure: 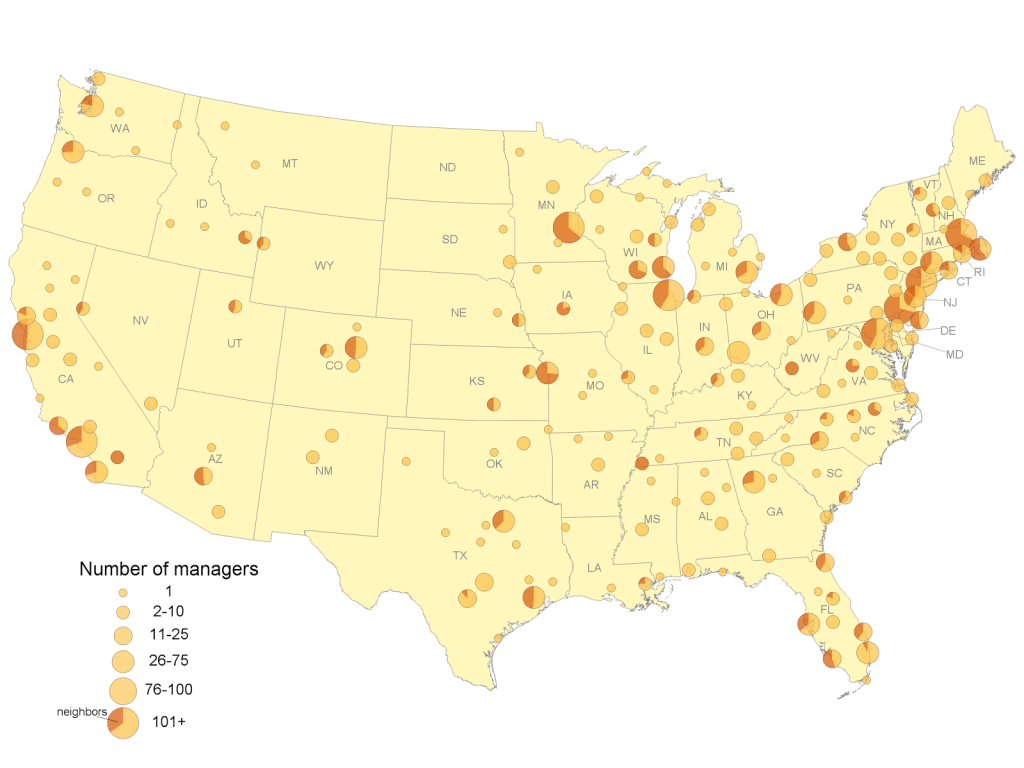 Note: The map shows how many managers have homes in each area, and the fraction who live sufficiently close to each other to be classified as neighbours by our algorithm.

Our results show clearly that neighbouring fund managers have more similar portfolios, and make more similar trades, than would be expected from  managers of similar funds who live in the same cities but are not neighbours. Looking at funds with just one manager, the portfolio overlap of funds managed by neighbours is 28 percent higher than would be expected from other factors like the fund style. These results are even stronger if the neighbouring fund managers have the same ethnic background, which we suspect is likely to be another factor that increases the chance that they know each other.

A challenge to research about the effects of social influence, including ours, is that people may be more connected because they have similar preferences: perhaps people with higher risk tolerance choose to live in the more up-and-coming neighbourhoods. So, in a way, they are neighbours because they buy the same stocks, not the other way around.

We include several tests in our paper to rule out this alternative explanation. For example, we show that managers only begin to have more similar portfolios after they become neighbours, which wouldn’t be the case if their decisions were based only on long-standing preferences.

Importantly, we also find that managers earn higher returns on those trades that overlap with those of their neighbours than on other trades. This shows that managers share valuable information through their social networks, suggesting one way that information spreads and comes to be reflected in stock prices.

An interesting question is why fund managers who may be competitors would share value-relevant information. We don’t know for sure, but can offer a few possible explanations. First, since our data do not allow us to study trading behaviour within quarters, it is possible that managers who have bought a stock subsequently share their information in an effort to have information impounded in prices more quickly, thereby allowing them to profit. Second, the detrimental effect of sharing information is not likely to be high — the effect on relative performance of sharing a few stock picks is probably small. This may be especially true among managers whose funds are not in the same style category, as direct performance comparisons between these funds are less relevant. Third, managers may have an expectation of quid pro quo, whereby sharing information now could help them in the future.

Whatever the reason, we can be confident that professional fund managers do in fact share valuable investment ideas.

Veronika K. Pool is an associate professor of finance and the ArcelorMittal Finance Faculty Fellow at Indiana University’s Kelley School of Business.  Her research interests include investor behavior, hedge funds and mutual funds, and retirement plans.  Her work focuses on the factors that drive the behavior of financial intermediaries, with an emphasis on the role of incentives in financial decision making.

Noah Stoffman is an associate professor of finance at the Kelley School of Business at Indiana University. His research focuses on the investment decisions of individual investors and mutual fund managers, and on the effect of technological innovation on asset prices.

Scott Yonker is an assistant professor and the Lynn A. Calpeter Sesquicentennial Faculty Fellow in Finance at the Dyson School of Applied Economics and Management at Cornell University. His primary research interests are in the areas of corporate finance, investments, and behavioral finance. Utilizing tools from psychology, sociology, and economics, Yonker investigates how identifiable differences in key market players impact the important decisions that they make.