Are firms with offshore headquarters worth more?

Are firms with offshore headquarters worth more?

Over the last two decades, an increasing number of companies have chosen to register or establish subsidiaries in offshore financial centres. OFCs are characterized by low taxation, flexible regulations, and secrecy policies (see Fig 1 for the list of OFCs, ranked by Offshore Attitude Index). Many companies with subsidiaries offshore are market icons, such as Google Inc., Apple Inc., and the General Electric Company. For example, Google’s offshore operations helped the company reduce its overseas tax rate to 2.4 percent in 2009, the lowest tax rate compared to the top five U.S. technology companies by market capitalisation.

Figure 1: Offshore Attitude Index for Offshore Financial Centers.  Larger values mean a greater degree of offshore attitude (based on such factors as lack of political stability and regulatory enforcement, the presence of economic crime, and inclusion in one of the OFC blacklists: Financial Stability list, FATF list of Non-Cooperative Countries and Territories, and OECD list of tax havens.) 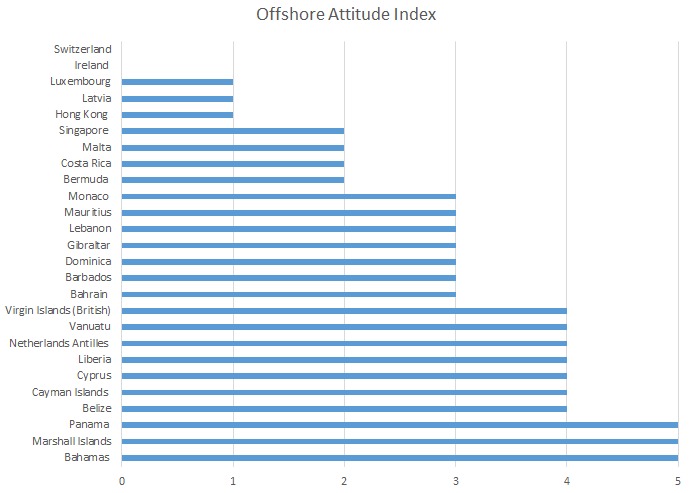 On 21 May 2013 the Permanent Subcommittee on Investigations of the U.S. Senate Homeland Security and Government Affairs Committee held a hearing that was a continuation of a series of reviews conducted by the Subcommittee on how corporate taxpayers were shifting billions of dollars offshore to avoid U.S. taxes.

By 2014, institutions in offshore locations managed five to seven trillion U.S. dollars, which is five times the amount of two decades ago, representing six to eight percent of worldwide wealth under management. Both investors and politicians have raised concerns over the taxation and investor protection aspects of these operations. For instance, offshore centres were a key topic in the 2012 U.S. presidential election and of several past and currents Congressional investigative reports.

Offshore financial centres and firms are also at the forefront of government and regulatory actions around the world. Governments from both developed and developing countries have exerted increasing pressure on these centres to better protect investors. In April 2009, to reduce revenue losses to OFCs, the G20 countries agreed to cooperate more closely to push them to modify their policies, and, in turn, to enhance information transparency and to reduce opportunities for asset looting. Consistent with the G20 proposal, the White House announced a plan in May 2009 to curb tax evasion and the theft of assets by U.S. companies operating in offshore centres. Tax authorities from various countries have also pursued similar policies.

There are two ways companies can migrate operations offshore. They can directly register headquarters in offshore financial centres. Alternatively, they can establish subsidiaries there but have their headquarters registered in non-OFC countries or jurisdictions. Firms mainly migrate offshore because of the tax benefits provided. In this case, by transferring wealth from governments to shareholders, the tax avoidance benefits derived from the use of OFCs are expected to benefit shareholders by enhancing firm value. On the other hand, a tax-focused perspective overlooks some important institutional features of offshore firms that potentially reduce their value, e.g., agency costs resulting from information asymmetry between offshore firms’ managers and public shareholders. In other words, tax avoidance may not increase firm value if insiders divert tax savings from shareholders to their own purposes.

To examine whether migrating offshore or establishing a subsidiary offshore benefits shareholders, we construct a large and unique panel sample including thousands of firms with registered headquarters in 19 OFCs, plus firms from 30 non-OFC countries with only subsidiaries offshore. The data covers the years between 1998 and 2007. We find that the value of firms whose headquarters are registered offshore is significantly less than that of onshore firms. On the other hand, firms that have only subsidiaries, but not headquarters, in OFCs are worth more than onshore firms.

Specifically, firms that have subsidiaries in OFCs enjoy an 11 percent higher valuation over onshore companies, while firms with directly registered headquarters in OFCs are valued 14 percent lower than onshore companies. These significant adverse effects indicate that although firms registered offshore have much lower official average corporate tax rates (11.5 percent) than firms with subsidiaries offshore (36.5 percent), it appears that these tax savings are offset by agency costs arising from information asymmetry. Overall, our results are consistent with the view that agency costs divert most tax avoidance benefits to be derived from the use of OFCs.

Our results are important for policymakers. We argue that an efficient corporate tax reform should take into account different types of offshore firms because the valuation effect of offshore operations is drastically different for firms that directly register offshore compared to firms that have subsidiaries offshore. Lack of monitoring by tax authorities, loose legal regimes, and flexible regulation enforcement of OFCs increase the risk of insider expropriation and decrease investor protection. Moreover, the confidential policies of offshore financial centres and offshore firms’ complex legal structures create more opacity for investors. Such opacity negatively affects firm value and, to a large extent, largely offsets tax avoidance benefits, especially for firms registered offshore. We argue that a one-country mapping of legal origin may provide a misleading impression to investors.

Tiemei Li is Assistant Professor of Accounting at the Telfer School of Management, University of Ottawa. She worked in the Chinese financial industry before starting her academic career. Her current research interests primarily focus on financial reporting quality, corporate finance, and the effects of accounting information on equity markets.

Michel Magnan is Stephen A. Jarislowsky Chair in Corporate Governance and Director of the Desjardins Centre for Business Finance Innovation at the John Molson School of Business, Concordia University. He is a Fellow of the Royal Society of Canada and a Member of Canada’s Accounting Standards Board and Director of Desjardins Securities Inc. His interests encompass financial reporting, financial statement analysis, governance, executive compensation, ethics and the environment, and corporate disclosure.