CEO pay should factor in market risk, regardless of its effect on their performance

CEO pay should factor in market risk, regardless of its effect on their performance 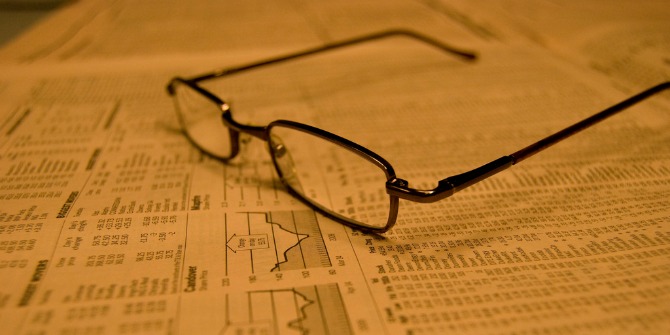 Writing effective managerial contracts is far from easy. Compensation committees must allocate incentives where they are most needed, while simultaneously being careful not to induce behaviours that would be detrimental to shareholders or imposing an inordinate amount of risk on managers. In a recent paper, I specifically focus on this second problem, that of reducing the risk borne by management without adverse consequences on incentives.

It is very typical to think about useful versus useless risk exposure. Useful risk exposure is informative on managerial actions. Managers have room for manoeuvre. How they react can affect the firm’s bottom line. Therefore this risk should be taken into account in their compensation packages. On the other hand, useless risk conveys no information. Managers have no control over it, so why should their compensation reflect it? A great example of useless risk is given in a study (Are CEOS Rewarded for Luck? The Ones without Principals Are) by M. Bertrand and S. Mullainathan, who, coining it “pay for luck,” observe that managers in the oil industry appear to be paid less after declines in oil price levels.

Opinions about how to deal with useless risk vary. It was originally believed that compensation committees should try to actively remove this risk, for example, indexing stock options or accounting bonuses on market or industry performance (Executive Compensation: Six Questions that Need Answering). More recent literature takes a different view, arguing that we could simply let the manager privately hedge away any unwanted useless risk (CEO compensation, diversification, and incentives).  Take the previous example of oil price movements: managers unhappy with useless oil price risk should simply buy oil derivatives for their own account and, in doing so, protect themselves against adverse consequences on their compensation.

But I am not sure this view is quite correct and, in a recent study (Incentive Contracts, Market Risk, and Cost of Capital), I explain why there is a role for exposure to seemingly useless risks, within the compensation contract. You see, a manager may try to hedge useless market risk by trading on a personal account but, remember, any such trade cannot be allowed to depend on the firm-specific, useful risk; otherwise, the manager might simply sell off all the useful risk as well. So, is it that easy to hedge away market risk?

Not necessarily. Figure 1, below, is from work with co-authors Edwige Cheynel from Columbia University and Michelle Liu-Watts from Hunter College (Are the Fama French Factors treated as Risk? Evidence from CEO compensation). For the period 2007 to 2014, it shows that the delta of manager’s wealth, that is the dollar effect (in millions) of a one percent increase in the firm’s stock price on the value of all shares and options owned by the manager is lower during economic recessions, as if firms were implicitly cutting incentives during bad times. 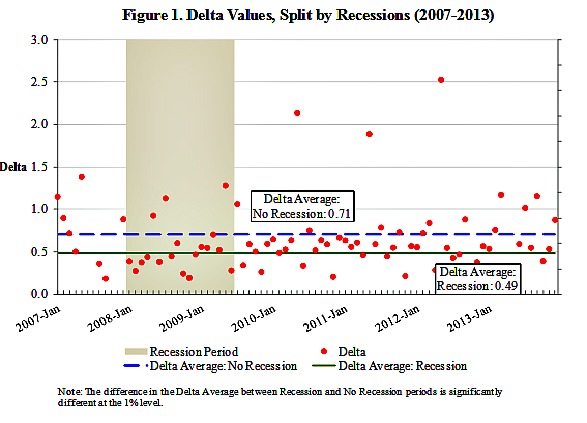 To understand one channel for this effect, consider a standard stock option. The delta of the option is how much the value of this option increases for a small increases in the stock price. It captures the incentives carried by the option. The demonstrates that the delta will increase in an overall market increase. Management is thus given greater financial incentives when the market has gone up. Ponder the following question: how would a manager easily hedge away this type of market risk?

So, we are back to the alternative, earlier explanation: perhaps some firms do impose useless risks on their management which serves no purpose and, worse, cannot even be hedged away.  Should the advice be to clean up this feature in compensation arrangements? Again, I disagree with this view, and, within the paper, offer a tentative argument.

Most economists view the most persuasive type of individual preference as exhibiting decreasing absolute risk aversion, which simply means that individuals tend to be willing to accept more risks when they are wealthier. Let us apply this logic to the compensation problem. When the market goes up, the entire economy – including the manager – is becoming wealthier, thus causing a lesser aversion to being exposed to useful risks. Hence, for a given target level of incentives, a contract should involve higher incentives when the market is doing well. This is precisely the feature described earlier. In fact, my advice is quite the opposite: compensation features such as options yield this desirable exposure to market risk that one might not always find with restricted shares or accounting-based bonuses.

There is one implication of this theory which goes beyond the compensation question. We know from traditional asset pricing theory that risks that are not fully diversified by individuals might affect firms’ cost of capital, and useful risks are indeed imperfectly diversified. The quality of an imperfectly diversified source of income may, in principle, have asset pricing implications. By asset pricing, I mean that the quality of reporting systems may directly affect the cost of capital, even though, if we add all these shocks together, the aggregate outcome is not changing. Put differently, we may know that a specific aggregate number of apples will fall from a tree, but some environment may be able to better measure how many apples were picked up by an individual worker. In fact, some of the earlier asset pricing literature had shown that shocks that are not well-diversified by individuals, if they are not part of an optimal contract, would have an effect, albeit a small one, on the cost of capital (Asset‐pricing Puzzles and Incomplete Markets).

To my surprise, I found that in principle, neither should happen. If we add up the effect of each undiversified individual with exactly the degree of imperfect diversification prescribed by their contract on the demand for market risk, many terms simply and, in the end, the useful risk has no effect on the cost of capital.  In other words, an environment in which (i) stewardship is very difficult and must be induced by huge levels of incentives and low diversification will yield the same cost of capital as an environment in which (ii) stewardship is excellent. The cost of capital is solely driven by the volatility of the market risk, as it would be the case in traditional asset pricing theory which does not involve incentive considerations.

Jeremy Bertomeu is an assistant professor of accountancy at Baruch College, at the City University of New York. He participates in several research initiatives that, jointly with several colleagues, he hopes will help disseminate theoretical research in accounting.