A startup wants to disrupt the healthcare technology sector

With Theranos, Elizabeth Holmes is breaking into a market controlled by venerable giants, argues Alex Verkhivker

A startup wants to disrupt the healthcare technology sector 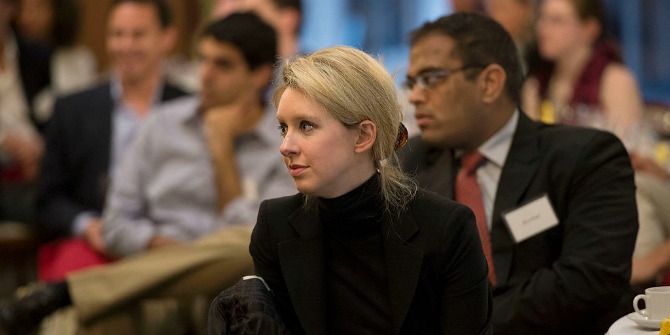 Diagnostic lab testing is a multi-billion dollar business, and is not without shortcomings. Blood tests are costly, available at inconvenient locations and involve painful needles that draw more blood than is warranted. Elizabeth Holmes, the 32-year-old founder of Theranos, aims to make blood testing a consumer-driven experience that is painless and price efficient. Having traveled the country and delivered numerous interviews, Holmes is harping on the need for consumers to have access to their personal data and her mission is for every individual, no matter their income or location, to get access to health information at the time it matters – prior to exhibiting symptoms of illness or disease.

Theranos is breaking into a market that is dominated by two venerable giants, Quest and Laboratory Corporation of America and is doing something new, something that doesn’t involve testing with syringes or making diagnoses from large quantities of blood. The start-up is also different because it is not just a medical device corporation, but a laboratory too. Quest and Lab Corp both run tests on equipment that is purchased from outside vendors. Theranos makes its own technology. Part of the recent attention it has received is its lack of communication about how the technology works, specifically how it is able to process a full range of lab tests from a few drops of blood. Ms. Holmes has been vocal about her company use of proprietary means for its finger-prick tests and not using commercially available equipment. She let the world know that she sought out FDA approval for the technology and has spoken about her belief that Theranos will disrupt the health care sector for the greater good of individuals needing blood tests.

The shift in control from doctor to patient over one’s health information is tantamount to making accessible health information a basic human right. In terms of detection, Ms. Holmes has reiterated that some 90 million undiagnosed pre-diabetics exist in the United States. By getting people more involved with their own health, the more Ms. Holmes aims to engender individuals to go out and get laboratory tests done at affordable prices, even if the individual has not been diagnosed as having the disease. Innovation for Theranos resides in its transparent pricing. You can find the company’s menu prices directly off its test menu. There are hundreds of tests which the company may perform and rather than having a phlebotomist draw a vial of blood, the Walgreens stores that Theranos partners with can use the proprietary NanotainerTM technology to draw just a drop of blood from a patient and have the medical test performed at a fraction of the Medicare reimbursement rate.

Despite the recent negative publicity the startup has received about the functionality of its proprietary technology and the calls raising the integrity of the CEO herself, Ms. Holmes has maintained the company’s mission and is determined to stay the course. For Theranos, staying the course means disrupting the healthcare technology sector and being faster, cheaper and more transparent than its competition. By making its prices transparent and more affordable, the company is poised to get more individuals passionate about owning their personal health information and getting to the Walgreens pharmacies it has partnered with to test for a slew of diseases, including: cardiovascular, Type 2 diabetes, kidney and cancer. Because patients can proactively seek out testing, they don’t have to wait until they have the disease to get treatment. At-risk patients can prevent disease onset more quickly through being empowered to seek out blood testing at affordable rates.

Ms. Holmes has been quoted as saying that phlebotomy acts as an inhibitor to individuals going out and getting their blood drawn out of fear for having too much blood drawn. The technology innovation associated with the NanotainerTM allows for results to be analysed and processed in just a few hours, per Ms. Holmes. A person can walk into a Walgreens store, get tested for something their doctor requires and have the results sent to that patient’s physician all in one day. Another important point is that if the patient’s doctor were to want to have more tests done on the patient, the patient would not need to go and have more blood drawn. All of the tests can be done using the original sample of blood drawn at the Walgreens store using the NanotainerTM technology.

I’ve watched Ms. Holmes in numerous interviews articulate the mission of her organisation and every time I listen I feel empowered. Living in a world where no individual finds out it is too late to treat a disease or illness empowers anyone to take control of their personal health information and to act on that information at the time it matters most. Theranos is not looking to sell any individual’s health information or profit from advertising such information to third-party providers. The health tests one can receive from using Theranos’ technology are private, secure and confidential.

Theranos’ mission is simple and empowering, and helps nudge consumers to take control of their health. Despite any negative publicity, one can’t help but be fascinated and amazed at the passion in Elizabeth Holmes’ voice when she speaks of the company, its mission statement and her employees. Ms. Holmes has made it her life’s mission to promote a better healthcare system for each and every individual. It should come as no surprise that pundits will take swings at her company and its technology. One thing, however, is undeniable. Theranos is confident in the reliability of its tests, technology and procedures and doesn’t plan on backing down anytime soon.

Alex Verkhivker is a contributor to Capital Ideas at The University of Chicago Booth School of Business. He has previously worked as an economic researcher with the Federal Trade Commission in Washington and as an Associate Economist at the Federal Reserve Bank of Chicago. He has written for the Becker Friedman Institute For Research In Economics at The University of Chicago, The United Kingdom Centre for Policy Studies CapX, Forbes, Huffington Post, Washington Examiner, The Times of Northwest Indiana and Economics 21 – the economics portal of the Manhattan Institute for Policy Research. Alex holds degrees in economics and management from The University of Chicago and UCLA, respectively. You can follow him on twitter @averkh.