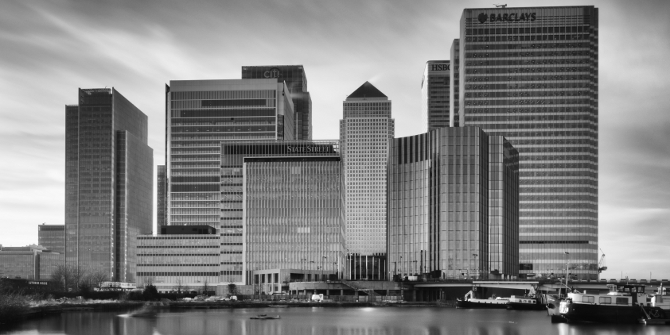 Until recently the City has sought to maintain a low profile on Brexit. For an industry still very much in the public gaze, there is little incentive to stick their head above the parapet as long as the outcome of the referendum result remains shrouded in uncertainty.

Finance, above all else, is deeply uncomfortable about making public interventions into politics and would prefer to be on the winning side. Broadly speaking the City has been supportive of the Prime Minister’s renegotiation of the terms of British membership. It is strongly supportive of the EU single market, access to which is an important source of the City’s success as a global financial hub, but it is deeply concerned about the regulatory implications of banking union and Eurozone caucusing. This is reflected in the softly pro-European rhetoric of the main trade associations, such as TheCityUK and the British Bankers’ Association.

Yet this doesn’t tell us the full story. In recent weeks, murmurings of discontent from certain parts of the square mile have become increasingly audible. The City of London Corporation is leaning towards staying in, while prominent hedge funds remain divided; elsewhere plans are afoot to launch a pro-Brexit ‘City for Britain’ campaign. How do we explain this? Economic explanations focus on the divergence of business models between firms and their relative dependency on domestic versus European and international trade. But these accounts are inconclusive at best and potentially misleading.

Instead we need to bring the politics back in. This means thinking seriously about how the political economy of regulation has evolved over recent years. Industry preferences on Brexit have been shaped in part by their experience of post-crisis regulatory reform, and the simple fact is that this experience has differed widely depending on which section of the City you examine. The most important fault line to have emerged recently is that which exists between the banking and non-banking sectors.

The banking industry, which is dominated by a few large players and has been regulated by Europe for decades, is deeply concerned about the impact of Brexit and the implications of this for their continued access to lucrative European financial markets. Moreover, their bruising experience of post-crisis regulation has been shaped primarily by the UK government’s determination to pursue banking reform.

This is intended to resolve the so-called ‘British dilemma’: how to maintain the competitiveness of the financial industry while containing the risk to UK taxpayers of future bank failures. The reforms have taken two forms. First, banks have been forced to deleverage and recapitalise significantly faster than those in the rest of Europe, and to go beyond international and EU-level commitments (as enshrined in Basel 3 Accord and the Capital Requirements Directive IV).

For this reason, the UK government, egged on by the Bank of England, opposed EU attempts at the ‘maximum harmonisation’ of bank capital, wishing to reserve the right to impose requirements above and beyond those sanctioned by the Commission. Second, the Coalition government established an Independent Commission on Banking (ICB) which recommended that UK banks’ retail activities be ‘ringfenced’.

This was followed by a series of scandals, including Libor, which exposed the industry to intense scrutiny and the establishment of the Parliamentary Commission on Banking Standards (PCBS). For the banks the post-crisis experience has left a bitter taste in the mouth, leaving many convinced that they would prefer to take their chances in the quiet politics of Brussels to the Wild West of Westminster.

By contrast, the highly fragmented non-banking sector – including private equity, hedge funds and venture capital firms – had little or no involvement with Brussels prior to the financial crisis. Unsurprisingly their view of Europe has been tainted by the baptism of fire they have undergone in recent years, most notably with respect to the Alternative Investment Fund Managers’ Directive (2011). This was a Franco-German regulatory initiative, rooted in perceptions that the crisis was caused by ‘Anglo Saxon’ capitalism, embodied in the high risk and predatory activities of the non-banking sector.

The Socialist group in the European Parliament ramped up the rhetoric, forcing the Commission to propose hastily crafted legislation which was poorly drafted, terrified industry and even provoked the scorn of the US government. There followed a prolonged and, at times, fierce battle by industry to amend the proposed regulation, hampered by the fact that it had little knowledge of how the EU worked and few connections to the main institutions. Although the final outcome was broadly acceptable to them, it left the sector fearful of what the future might hold.

In short, there is no unified City view on Europe. Principal-agent analysis tells us that trade associations (as agents) simply tend to vocalise the preferences of their largest members (principals), hence their soft pro-Europeanism. However, this shouldn’t disguise the fact that the City’s carefully crafted collective voice masks real divisions over Brexit.

Scott James is Senior Lecturer in Political Economy at King’s College London. He studied for a BA (Hons) in Politics at the University of Liverpool between 1998 and 2002, and was awarded an ESRC Research Studentship to undertake an MA in European Politics (Research) and doctoral research on the ‘Europeanisation of National Policy Making’ at the University of Manchester from 2004 to 2008. He joined King’s College London in 2008. Dr James was the Principal Investigator for the ESRC Project: Voices in the City: Understanding the Role of the City of London as a Multi-Level Policy Actor and the Impact of the Financial Crisis.