How corporate governance moved to the forefront of management

How corporate governance moved to the forefront of management 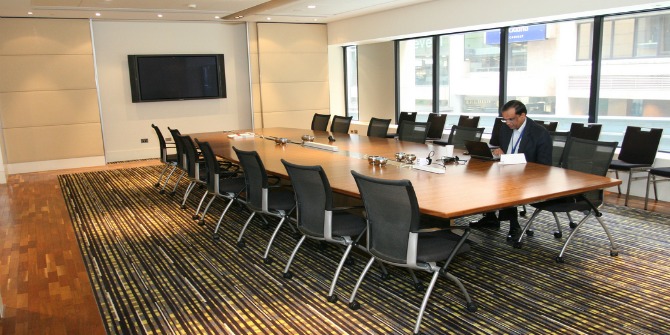 While the term “corporate governance” is now used universally when managerial accountability in publicly traded companies is under consideration, the term was largely unknown until the 1970s. In a recent paper, I explain how and why corporate governance moved to the forefront in the manner it did in the United States, the country where the term first came to prominence.

The United States experienced in the late 19th and early 20th centuries a “managerial revolution,” where a growing division between ownership and control was accompanied by the promulgation of increasingly sophisticated managerial hierarchies. The trend climaxed with an era of “managerial capitalism” running from the end of the World War II to the 1970s. During this era corporate scandals were rare amidst sustained economic prosperity. The dearth of corporate wrongdoing cannot be attributed to present-day mainstays of theoretically sound corporate governance, namely vigilant boards and attentive stockholders. Boards deferred to management absent a crisis and, with retail investors collectively owning a majority of outstanding shares, the prospects for meaningful shareholder engagement were bleak.

Various factors kept public company executives on the straight and narrow during the managerial capitalism era despite deferent boards and passive shareholders. In key economic sectors, industry-level regulation curtailed executive discretion. With the U.S. experiencing an era of “boring” banking due to tight regulation, restricted access to finance helped to keep managerial ambition in check. Finally, unions were powerful and to avoid debilitating strikes executives accepted numerous changes to work rules that limited their managerial prerogatives.

In the 1970s, with U.S. public companies under growing pressure due to foreign competition and challenging macroeconomic conditions, evidence of mismanagement and corporate malfeasance proliferated. This set the scene for greater emphasis on the governance mechanisms largely ignored during the heyday of managerial capitalism. Throughout the 1970s boards were reconfigured to considerably bolster the role of independent directors as managerial monitors. The balance of power between management and stockholders in public companies also began to shift in the stockholders’ favour. A wave of hostile takeovers in the 1980s meant the fate of publicly traded companies hinged to an unprecedented degree on shareholder perceptions of the capabilities of the incumbent management team. Also, institutional investors, which had replaced retail investors as the dominant owners of shares, successfully lobbied companies to reconfigure executive pay to ensure top management would be rewarded generously if shareholder returns were robust.

Dramatic changes affecting the discretion available to executives of U.S. public companies enhanced still further the profile of corporate governance as the 20th century drew to a close. With commercial and investment banks — formerly conservative allocators of capital — competing intensely for business, executives of public companies had unprecedented scope to finance new acquisitions and ambitious expansion plans. A marked decline in union power and a wave of deregulation likewise increased the latitude executives had available to them. In this new environment, executive performance likely mattered more for corporate success than it had during the managerial capitalism era. The proper functioning of corporate governance logically became a higher priority.

Corporate governance had very much “arrived” by the 1990s. Nevertheless, corporate scandals that engulfed prominent U.S. corporations in the early 2000s demonstrated the arrangements in place were not sufficiently robust to cope appropriately with the imperial-style chief executive who had moved to the forefront as managerial discretion expanded. Matters changed quickly. Due to a combination of regulatory reforms prompted by the scandals and a dramatic surge in activism by hedge funds lobbying aggressively for the unlocking of shareholder value, chief executives would soon be more embattled than imperial.

Banks were a temporary exception. Due to strong financial results, top executives of freewheeling financial firms enjoyed something of a corporate governance “free pass” for much of the 2000s. The 2008 financial crisis ended any special treatment. The regulatory and governance changes which ensued restored at least some of the boringness that had been a hallmark of banks of the managerial capitalism era.

While in the U.S. the managerial capitalism era ended in the 1970s, a consensus has yet to emerge on what to call what has replaced it, with contenders including “fiduciary capitalism,” “investor capitalism,” and “shareholder capitalism”. Regardless of what label ultimately moves to the forefront, corporate governance has emerged as a significant feature of this new era. There is mixed evidence concerning the impact of theoretically sound corporate governance on corporate performance. Regardless, today’s public company executives are clearly facing a considerably different menu list of opportunities and constraints than their managerial capitalism era counterparts and the growing prominence of corporate governance has contributed substantially to that process.

Brian R. Cheffins has been since 1998 the S.J. Berwin Professor of Corporate Law at Cambridge University, having begun his academic career at the University of British Columbia’s Faculty of Law. Professor Cheffins has held visiting appointments at Columbia, Duke, Harvard, Oxford, Stanford, the University of British Columbia and the University of Western Ontario. He was named a Guggenheim Fellow in 2002, was in 2014 the Thomas K. McCraw Fellow in U.S. Business History at Harvard Business School and will in 2016-17 and 2017-18 be working on “The Transformation of the Public Company” under the auspices of a Leverhulme Major Research Fellowship.  Professor Cheffins is the author of Company Law:  Theory, Structure and Operation (1997), The Trajectory of (Corporate Law) Scholarship (2004), Corporate Ownership and Control:  British Business Transformed (2008), is the editor of The Modern History of U.S. Corporate Governance (2011) and has written numerous articles on corporate law and corporate governance.