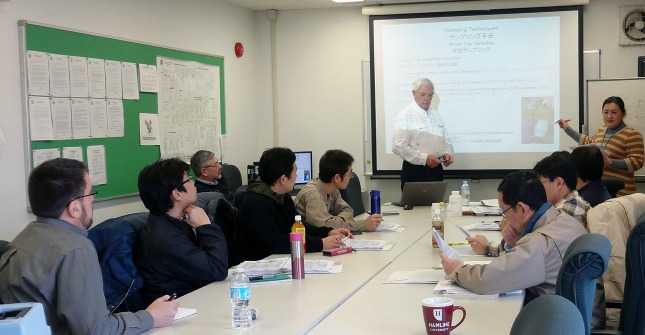 There is much talk about change and how managers must communicate to ensure it occurs smoothly. However, seldom does advice for managing change go beyond language of change; the ways to explain the proposed change and persuade workers of its importance and guide them as they ‘get on board’. This advice rarely looks at the non-verbal tools that managers can have at their disposal to influence change.

How does materiality contribute in practice to the implementation of a strategic change? And what kind of materiality can be mobilised in this process? These are the two questions we addressed in a recent paper.

Everyone can be a strategist!

Strategy work has long been considered in terms of grand strategic discourses and familiar tools like the SWOT analysis, PEST analysis and BCG matrix that senior managers use to create strategy. Contemporary scholars are now arguing that strategy should not be viewed as something an organisation has, that is defined and disseminated by those at the top, but rather as what people do in organisations. This perspective encourages us to see those outside senior management roles also as strategists and calls for greater attention to the everyday strategic practices of people throughout the organisation.

In this paper, we argue that middle managers can play a central role in strategic implementation as long as they think and act as strategists. Our study presents a richly nuanced case that shows how the mundane tools produced by a middle manager are inextricably coupled with the performance of new strategic practices. We use data from an intensive field study of a change implementation in a former public sector organisation in France to do this.

Taking an interpretive stance, the study examines the material side of a middle manager’s work to show how the relationship between people and the physical world in which they work contributes to successful strategy enactment. It shows how, by creating new spaces, physical structures and forms, the middle manager materialises the senior managers’ global company strategy. As his subordinates go about their daily practices using these material tools, they implement the company executives’  plan. At the same time, by the way he designs these physical tools, the middle manager modifies the way the global strategy is enacted locally to be consistent with his personal managerial philosophy.

The philosophy behind the company’s global change initiative appeared to have been neo-Taylorist. We say this because the senior managers sought to increase performance by taking a very mechanistic view of the organisation that concentrated on the division of tasks, specialisation of employees and hierarchical control. Even though the middle manager accepted the senior managers’ main objective (increasing performance), his ideal view of managerial best practice was more contemporary; underpinned by a desire to be responsive, flexible and worker-centred. He preferred to develop his employees’ versatility and increase individual accountability and motivation, conditions he considered necessary for developing effective customer relationships and improving performance, rather than managing in an autocratic way.

His approach was successful. His unit was the only one in the company to successfully achieve all the global change objectives across the six-month implementation period. Our data suggest this success could be attributed to the way he produced or adapted ten different forms of materiality to simultaneously embody his sense of the global (HQ) level strategy and his personal management philosophy. He produced material texts that workers read or wrote on in order to perform their work as well as displays that produced performance figures that senior managers read to confirm their strategic intent was being realised in practice.

Giving sense to a strategy through materiality

The following diagram captures the way global strategic practices were aligned with the company’s global strategy through the reading and writing of material texts. The texts were ‘operational’ (e.g., forms that had to be filled in), ‘geosocial ‘(structured the spaces people interacted in) or ‘controlled the timing of tasks’.

Figure 1. Writing and reading the texts 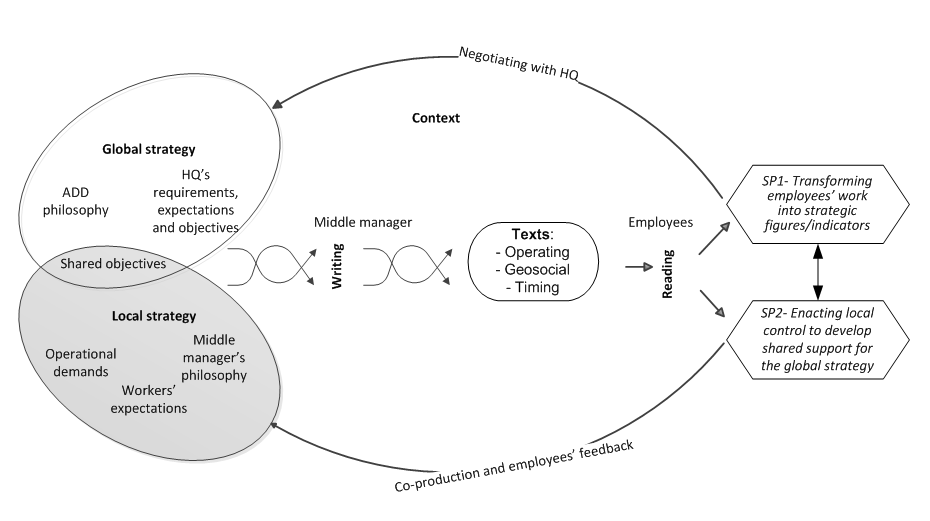 By shaping the reading and writing of texts, the middle manager was critical to the achievement of the global strategic change objectives because these texts provided the structure to support workers’ increased performance as measured by HQ’s performance indicators (feedback line to HQ in Figure 1). His approach was tailored to local expectations regarding appropriate ways of working, and clarified the changes demanded by the global strategic plan.

The new tools therefore not only facilitated increased operational efficiency but simultaneously served to couple local and global strategies in a coherent manner (represented by intertwined wavy lines in Figure 1) that had workers’ endorsement. As noted earlier, the adoption of these tools also materialised the influence of the manager and his distinctive managerial philosophy, with its emphasis on versatility, accountability and motivation and allowed him to provide values-based strategic leadership. His material interventions were in stark contrast to those proposed by senior staff at HQ and had no equivalents in the other business units.

So, what are the practical implications of our research for managers? Our study suggests that managers’ “materialising skills” should be seen as critical to successful change implementation. By producing material texts they can foster employees’ support for company strategy while simultaneously transforming how work is done so it creates figures or indicators that quantify performance and confirm senior management’s strategic change objectives are being met.

Clearly, not every manager can collaboratively develop strategic tools that materialise strategy at the local level. Only one manager had these special skills in the company we studied. This suggests middle managers need to be trained to be sceptical about the utility of global practices and ‘off-the-shelf’ strategy tools and shown how they can create local tools that structure practice in ways consistent with change initiatives, their personal managerial philosophy and their workers’ expectations about how work can be effectively done.

In essence, our findings highlight the pivotal role of middle managers in organisational change. They are pivotal because they are in the ideal position to interpret global strategy locally by crafting material tools that not only shape understanding but structure practice and generate the metrics that confirm strategic intent is being realised in practice.

Nicolas Arnaud, HDR, is an Associate Professor in the Department of Management, Organisation and Law and holds the position of Deputy Director of Audencia Grande École at Audencia, School of Management, Nantes, France. His research interests include collective skill and middle managers practices from a communication perspective. His works have been published in leading academic journals. He also recently published an organizational communication textbook.

Colleen E. Mills is an Associate Professor in the Department of Management, Marketing and Entrepreneurship at the University of Canterbury, New Zealand. Her research examines organizational processes during times of uncertainty and change. Her work, which has produced models of sense making about communication during change, organisational gossip during change and enterprise orientations during startup, is published in leading academic journals. She is a Board Member at Large for the International Communication Association (ICA), an Executive Member and a past-president of the Australian and New Zealand Communication Association (ANZCA) and serves on several journals’ editorial review boards.