The book presents a clear discussion of how IT decisions are made, argues Christopher May 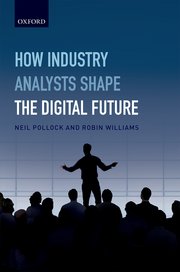 For some years I served as a senior academic manager in the Faculty of Arts and Social Sciences at Lancaster University and was involved with a number of university-wide IT projects. It took me a little while to realise that the ‘Gartner’ who was often referred to as suggesting ‘X’ or ‘Y’ was not a colleague, but rather a private consultancy. Therefore having already experienced Gartner’s influence, I was immediately drawn to the central case in Neil Pollock and Robin Williams’ new book, How Industry Analysts Shape the Digital Future. The authors use a study of Gartner Inc. to underpin their analysis of the manner in which technology predictions and projections can shape actions and become (almost) self-fulfilling prophecies if pushed hard and wide enough.

At the heart of the book is an attempt to describe how analysts shape and direct the market for various (information) technologies using four dimensions of influence: descriptions of the direction of development (predictions and scenario predictions related to new and emerging technologies); the acceleration and deceleration of technological trajectories via reviews/assessments, which drive technical adoption down particular paths; the modification of trajectories, where the identification of opportunities or challenges allows analysts to display critical insights when reviewing the deployment of recent advances; and the mobilisation of presumptions where analysts are able to establish the context in which developments are assessed in the first place, which for many critical political economists is a parallel to the power of agenda setting.

Drawing sustenance explicitly from work that has sought to identify the ‘performativity’ of financial markets, the authors dismiss notions that Gartner’s and others’ knowledge is flawed or superficial, and seek to understand the manner in which it is developed and deployed in the realm of technology adoption by organisations. Their conceptualisation of performativity, while drawing on the work of Michel Callon and Donald MacKenzie, focuses on the ‘interactions between the generators of theory and their audiences’ (23), rather than the more Austinian notion of the constitution of reality though linguistic performance or Callon and MacKenzie’s depiction of a market itself being brought into existence via the performances of its participants. Here, ‘performance’ is more to do with a joint enterprise in (potentially self-fulfilling) predictions towards (reformed) actions.

To understand the key case that the authors focus on, the first substantive chapters offer both a history of Gartner (starting with its establishment by Gideon Gartner) and a description of its structure and hiring processes. Having the advantage of excellent access to the company, Pollock and Williams are well-placed to counter criticism of this major generator of business-related knowledge from other analysts, who they argue have prematurely dismissed much of Gartner’s work with little attempt to understand the processes by which the intellectual content of their reports, consultancy and other outputs are generated. However, equally the authors are not merely naïve celebrants of Gartner’s operations; rather, they seek to understand how the company has managed to increasingly dominate the provision of research analysis for the information technology sector.

Setting their analysis within the context of a revised notion of the sociology of the professions, and recognising that for some the notion of industrial analysts qua professionals may be a stretch, nevertheless the authors make a strong case for the sort of epistemic authority (my term not theirs) that such a self-perception among the actors produces and reinforces. This leads them to identify the key role of ‘promissory behaviour’, which they disaggregate into three forms: infrastructural knowledge (in this case Gartner’s ability to construct its expertise as authoritative knowledge of the context of IT development); statements and their world (the utilisation of processes and research to inform and support particular decisions and trajectories); and visions let loose (an ability to offer more speculative predictions, which are flexible and constantly checked/amended in light of Gartner’s continuing work).

However, specifically in the case of Gartner, the authors stress that this does not produce a unitary Gartner view, but rather supports a continually developing set of interventions, predictions and speculations. For Gartner this all comes together in the ‘Magic Quadrant’, which is explored in some depth, not least of all as the authors concede it has divided commentators, users and researchers. The two-by-two matrix has as its axes, ‘Ability to Execute’ and ‘Completeness of Vision’, with technology vendors placed on the matrix, and thus evaluated on the basis of assessments of these two capabilities. This makes for a fascinating discussion of the construction of the business intelligence at the heart of Gartner’s work, and leads the authors to focus a further extensive chapter on how Gartner uses the model and the characteristics of the evaluative outputs.

Overall this book seeks to present the world of (information) technology analysts as a subject worthy of academic, social scientific consideration, while perhaps a little less explicitly acting as an interesting intervention into ongoing discussions of technological development and the (so-called) information revolution or new economy. It does both things rather well, and in doing so, offers a very useful corrective to much discussion of the political economy of technological development which, even when not lapsing into crude technological determinism, still often is related as an oddly agentless process.

The value of this book is that it presents us with a clear agent-centred discussion of how information technology decisions are influenced by a key (corporate) actor, and also assembles a more general approach to the processes by which market knowledge is constructed and deployed by analytical professionals. To my mind there remains an intriguing intersection not exploited by Pollock and Williams between this work and the revised (and enhanced) recent discussions of epistemic communities in critical Political Economy. One can immediately see how this analysis might well play out in other realms where the ‘market’ for expertise is, in one way or another, commercialised. Nevertheless, this is a well-rounded, well-thought-through piece of critical social scientific research that deserves the wider audience a paperback edition would deliver.

Christopher May is Professor of Political Economy at Lancaster University, UK. His most recent book is Global Corporations in Global Governance (Routledge, 2015). He has published widely on the interaction between law and political economy, wrote the first independently authored study of the World Intellectual Property Organisation and some years ago wrote The Information Society: A Sceptical View (Polity Press, 2002).