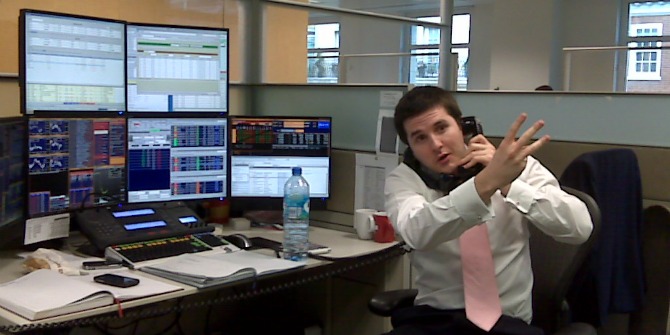 For instance, when Matthew Boss (a J.P. Morgan professional who has been rated as a star analyst by Institutional Investor magazine) downgraded Under Armour to a sell rating in 2012, the stock price dropped by four per cent despite the firm having a stellar reputation and a CEO who has been widely praised in the press.

Similarly, on January 11, 2008, Meredith Whitney (an analyst for Oppenheimer) lowered her rating of American Express. Although the broader markets were only down three-quarters of one per cent that day, American Express, despite being run by legendary CEO Ken Chenault, dropped by 10 per cent. On the same day, the stock of Dreamworks (a company run by entertainment icon Jeffrey Katzenberg) fell by three per cent when Merrill analyst Jessica Reif-Cohen lowered her rating of the company.

Companies spend millions of dollars trying to build strong reputations because they believe that a strong reputation improves their market value. But a company’s reputation is not the only one that will matter when people make decisions such as whether to invest in a firm; there is also the reputation of the CEO and the analyst. We wanted to explore how each of these types of reputation affects firms, and how the market would react when confronted with multiple trusted sources of information.

To explore which type of reputation is more influential, we gathered information on corporate, financial, and market information compiled over a 13-year period from large databases. We examined the influence of analyst, CEO, and firm reputation on the size of the market’s reactions to analyst upgrades and downgrades — that is, whether the stock price went up or down after an analyst recommended buying, holding, or selling a firm’s stock.

With a massive literature devoted to leadership and American companies reportedly spending $14 billion a year to teach it, one might expect that a CEO’s reputation would outshine those of even well-regarded analysts. Our study, recently published in the Academy of Management Journal, found otherwise.

We found a similar pattern when we looked at upgrades. Star analysts ratings again had the greatest impact on market reactions: upgrades to their ratings increased the positive market reaction by 42 per cent.

What are the implications of these results? Our findings suggest that while reputation is important, all reputations are not considered equally. When multiple reputations collide, some will matter more than others. Investors appear to weigh analysts’ reputation more than the reputations of others when making decisions. We suggest that this is because investors who are buying and selling stock view an analyst’s reputation as most relevant in this context. CEO and firm reputation are based on factors that are less directly relevant to the buy or sell decision at any given moment. This finding was somewhat surprising, however, given how many other studies have found large positive effects for CEO and firm reputation.

People weigh multiple reputations in many different contexts, from education markets to consumer products. For instance, universities have overall reputations, but so do individual departments, its athletic teams, and even individual professors. Similarly, consumers are also often faced with making a purchasing decision when there are multiple reputations, such as that of the product itself and its brand, as well as the reputation of the store selling the product. Consequently, it is important to understand which reputation is likely to be most influential. If companies are going to focus time and resources on building and maintaining their reputations, it is important to understand when it is going to matter, and when it isn’t.

Firms often wonder how effective their brands are, how their reputation influences observers, or on what factors observers focus their attention. Our findings suggest that people may not be balancing multiple sources of information, but are rather relying on the source of reputation that they feel is most relevant. When multiple reputations collide, we found that the one that is most related to the transaction at hand, and is most relevant to the person making the decision, matters most. For example, if an individual cares more about a product’s reliability, then they are likely to rely more on the product’s reputation than the store selling the product. If what they care about is after-sale service, however, then the store’s reputation is likely to be more influential.

We should ask the same question as consumers and investors, not just on behalf of our companies: are we are paying attention to the right sources of reputation in our everyday lives? And given the importance of reputation on so many outcomes, future studies should look to confirm whether the effects described above bear out in other contexts.

Steven Boivie (sboivie@mays.tamu.edu) is an associate professor in the Mays Business School at Texas A&M University where he is the B. Marie Oth Professor of Business. He received his Ph.D. in strategic management from the University of Texas at Austin. He is primarily interested in how behavioral and social forces affect human actors at the top of the organization and he conducts research in the areas of corporate governance, top executives and directors, and technology and new industry formation. His research has been published in top academic journals. Steve’s research has also been mentioned in a number of press outlets including the Wall Street Journal, Harvard Business Review online, Forbes.com, IR Magazine and The Economist.

Scott D. Graffin (sgraffin@uga.edu) is an Associate Professor at the University of Georgia’s Terry College of Business and is also an International Research Fellow at Oxford University’s Centre for Corporate Reputation. He earned his Ph.D. at the University of Wisconsin, Madison. His research interests include corporate governance, as well as the influence of reputation and status on organization outcomes.