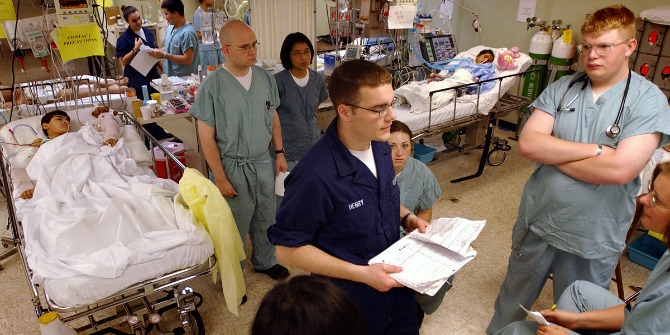 The healthcare system in the UK is currently facing what some are calling a leadership crisis. Leaders are under exceptional pressure to reduce running costs, meet regulator targets and continuously deliver high-quality care to patients with ever-growing expectations. The selection of leaders available to fill the increasing number of vacancies is falling, and the current targeting of support and resources to develop those currently in post, whilst required, continues to encourage the existing model of short-termism within the NHS. It is argued here that to ensure the NHS survives the ever-terrifying challenges it faces, leadership development approaches must ‘flip’ from those that are reactive, to those that are proactive.

Leadership now and for the future

In times of crisis it makes immediate sense to allocate resources. However, the pool of people these resources are currently going to is considered too small and decreasing rapidly. While we continue to appear to reject the notion of heroic leadership, attempts to systematically and consistently develop the distributed leadership agenda or, more traditionally, invest in talent management, are few and far between.

NHS organisations are like no other. They operate amongst challenges that require years of not only operational but political experience to navigate. This pressure is only increasing with the ever deepening push for transformational change with stretched human resources and funding. Millions of pounds and hundreds of thousands of lives are at stake each day in the NHS and its leaders are consistently found to be under-supported to take on the challenge. In worse-case scenarios, this lack of capability has been found to negatively affect patient care, reduce efforts for improvement, reduce staff morale and put tax-payers’ money at risk. In reality, can we surely only blame ourselves as system? To be quite frank, you would never hand someone the keys to your 100-billion-pound cruise ship in a storm and then start teaching them how to sail. While educational development is on its way to becoming established, to simply expect training or teaching to create great leaders is to neglect the long-term nurturing they require to effectively and confidently fulfil their role.

Coaching, shadowing and assignments are essential to developing true systems thinking, a key requirement of those who wish to steer the NHS through the current issues it faces. It has been recognised that the current model fails to enable continued and focused development of individuals and while the current cultural conditions that leaders must compete within should be changed, in reality, change at that level will be limited. In conjunction with attempting to make the system better, it is imperative that we begin to familiarise future leaders with the realities earlier on, developing realistic expectations and increasing resilience.

Those at ‘the top’ rarely have the reach we would hope for. Leadership requires extensive footwork in meetings, at events and with regulators. Unfortunately, these activities require leaders to focus ‘up and out’, often alongside other leaders and not those they are attempting to lead. These requirements cause leaders to delegate the role of instilling organisational vision to their subordinates. While, in an attempt to increase decision-making legitimacy, these managers are now increasingly expected to lead, they often receive little to no dedicated and personalised leadership development.

Developing leadership skills in identified people from the start of their careers not only prepares them for leadership positions but also strengthens organisational cohesiveness from the top to the bottom of the organisation. Role models, and those people are willing to follow, are often those who excel in the same conditions as themselves, and if positive deviance proves anything, we can see that great change can occur within communities that see positive behaviours shown by their peers, not those removed from them. By ‘planting’ leadership seeds across and at all levels of the hierarchy, the leadership reach increases, socialising the vision and mission throughout the organisation, rather than broadcasting it.

To solve these issues, the NHS needs to ‘flip’ leadership. Instead of waiting for positions to be filled to develop leaders, we need to develop leaders to fill positions. While support and development are certainly required at the top and should not stop, sustainability also requires it to be distributed throughout the hierarchy.

Why limit the benefits of leadership development to a small group of people with a shallow reach and a restricted ability to connect where and when it’s important? Leadership behaviours need to be developed in a wider array of people within the NHS, not only maximising the number of potential future leaders, but broadening the diversity of them. The development of leadership skills in both those who wish to take this career path and those who don’t is beneficial by increasing the pool of capable leaders at ‘the top’ and beyond.

In conclusion, when developing new leadership strategies, programmes and opportunities, concerted efforts should be made to ‘flip’ leadership. By doing this, we will ensure we not only support the leaders of today but nurture strong and effective leaders for the future.

Polly Pascoe is a knowledge management practitioner in the NHS with a remit to improve knowledge productivity nationally. She is also currently a PhD candidate at the University of Bradford, studying support mechanisms for evidence-based management.