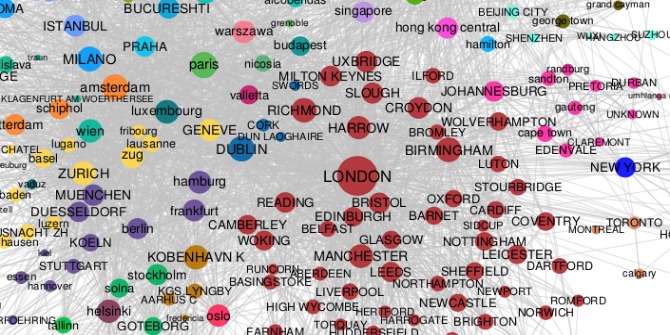 In this blog article, we investigate the position of the UK within the global corporate elite network. Firms are not individual market actors, but are typically embedded in dense networks of power and control, for example based on ownership or interlocking directorates. The CORPNET research group at the University of Amsterdam studies these networks as part of a five-year research programme funded by the European Research Council (ERC). The general idea behind the group’s so-called “network science“ approach is that by studying a system of interaction (the global economy) rather than mere sums and averages of the systems’s individuals (economic activity and behaviour of corporations/countries), we obtain new insights in the considered system.

Position of the UK and London

In early 2016, our research group studied the organization of the global corporate elite from a network perspective. We visualized the relationships between cities across the globe based on whether the firms in these cities were involved in board interlocks: shared senior level directors between firms. To learn more about the substantial body of literature on the causes and consequences of interlocks, see the excellent survey article by Mark Mizruchi.

We obtain a tightly connected so-called city network consisting of 24,747 cities (the nodes), connected through 874,810 distinct board interlock ties (the ties). The strict center of this network, consisting of the 409 (1.65 per cent) most well-connected cities across the globe, is shown in Figure 1. In this figure, a node (object) represents a city, the color of an object corresponds to the country, and the size of a node is based on how central this node is with respect to the other nodes, based on the structure of the network. Betweenness centrality is a network metric that indicates how often a node is on a shortest path between other nodes. It measures the brokerage position of that node, in our city network corresponding to a city’s contribution to connecting other cities across the globe.

Figure 1: The center of the city network based on board interlocks. Node color corresponds to the city’s country, node size is proportional to the city’s betweenness centrality value. 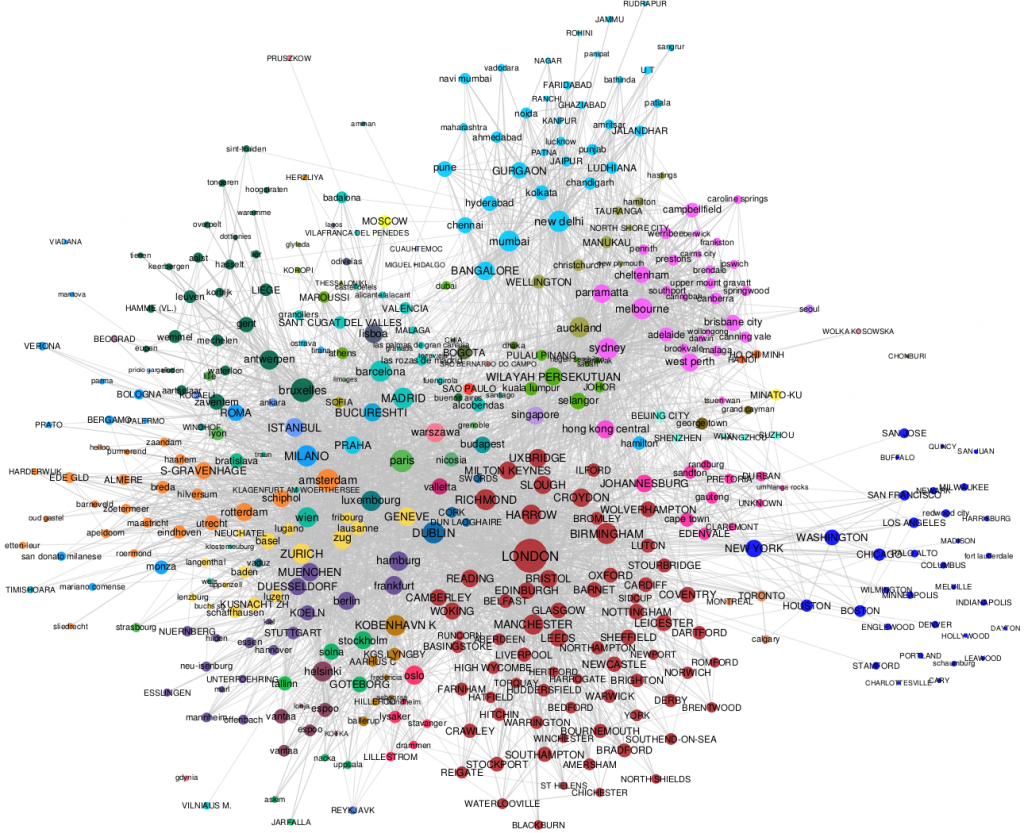 It is evident that London has by far the most dominant position in this network. Globally, London plays a crucial role in connecting the global corporate elite through short path lengths. Furthermore, we note that in general there is a large number of British cities (albeit as a result of London’s central position) present in the centre of this network. More specifically, even though only 723 (2.9 per cent) of the cities in the global network of 24,747 cities are in the United Kingdom, 69 (16.9 per cent) of the cities in the small centre of 409 cities is British. This demonstrates how on average the UK cities are nearly six times more dominant in the centre of the network than an average country’s cities.

The United Kingdom, and in particular London, is indeed at the heart of the world’s corporate elite. London is not only a gatekeeper through which the United Kingdom is connected with the rest of the world, but also connects the European mainland’s corporate elite to for example the United States, the East and the former British Commonwealth countries. During the Brexit campaign, it was often argued that in general, the city was largely in favour of staying in the EU (see for example this survey by CSFI). Contrarily, Brexit advocates claimed that Britain is a well-developed and globally integrated country that can stand on its own within the global economy, without the need of the European Union. But compared to Europe, how divided is the UK itself? Does it indeed have one well-organized and connected corporate structure?

To answer the above mentioned question, we will again “consult” the network, and attempt to derive communities from the city network based on board interlocks. We identify groups of nodes (cities) that are more tightly connected with each other, than with the rest of the network. Community detection is a well-known method from the field of network science that allows one to find these densely connected groups of nodes in the network, based only on the structure of the network, so without any prior knowledge rather than the network’s connections. Here we use modularity maximisation using the Louvain method, a well-known computationally efficient technique for finding communities that, by swapping nodes between communities, tries to optimise the modularity value indicating the quality of the division of the network into communities. If we use this algorithm on the aforementioned global city network and focus on Europe, we get the division of cities into communities as indicated by the colours in Figure 2.

Figure 2: The European part of the global city network. Colors correspond to communities. Ties are omitted for readability of the figure. 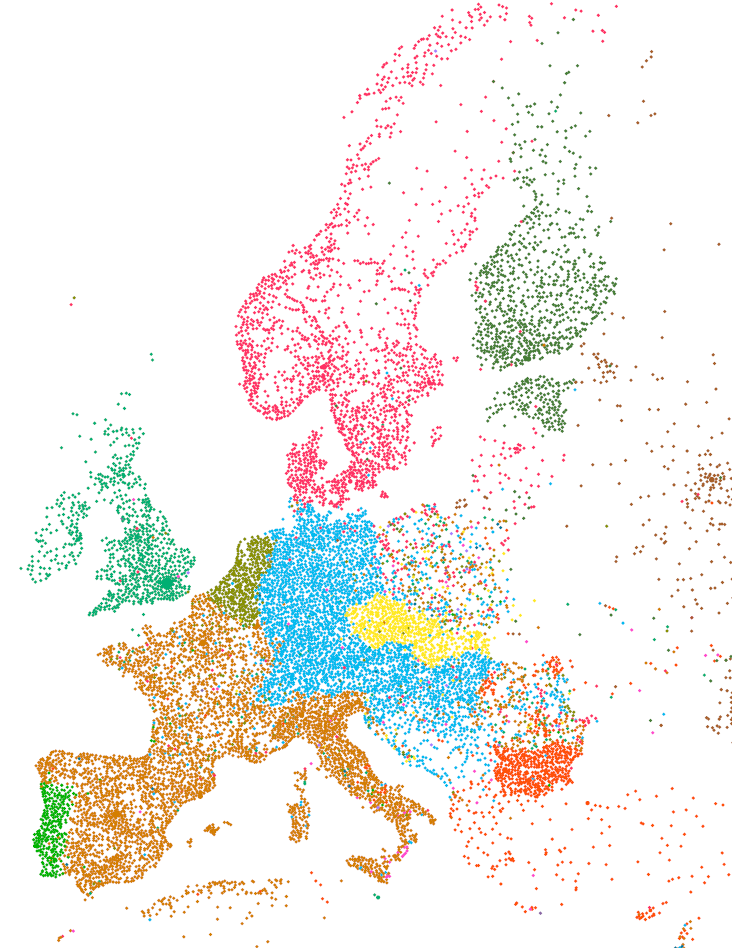 From Figure 2, we can observe that a number of communities spanning multiple countries are found by the algorithm: there is a community of Germany, Switzerland, Austria, Hungary and former Yugoslavian countries, a community of cities in the “Benelux” countries (Belgium, Netherlands, Luxembourg), a community of Southern-European countries including France, Spain and Italy (but not Portugal, which is more strongly connected to Brazil and Latin America, not visualized here). The Czech Republic and Slovakia form a tight community, and so do the Scandinavian countries, except for Finland which is apparently more tightly connected in a community with Estonia. Poland’s cities do not clearly belong to any particular community, and are mixed between the communities around Russia, Germany and Scandinavia. Interesting and worthy to note here is that no information on the geography of Europe was put into the community detection algorithm. The results are purely derived from the structure of the corporate elite through board interlocks.

Turning to the UK; in Figure 2 we see how British cities appear to be in a community together with Ireland, seemingly posing as a whole. It should be noted that a fair share of the board interlocks also occurs between firms within cities, resulting in so-called self-loops in the networks. In particular, London has an extraordinary strong self-loop, as the city houses a large number of firms that interlock with each other, creating a tie that is stronger than any other tie. One way of looking at these self-loops is to say that they somehow indicate the internal power structure of a city. Interestingly, if in the global city network we search for communities in the network with these self-loops, the British business community falls apart into a a total of 19 separate communities, as shown in Figure 3, separating London from the rest of the UK. The resulting communities have a clear regional character, and are no longer as well-connected as they were with London’s integrative power. This suggests that there may be substantial consequences for the international connectedness of certain regions of the UK, should the Brexit somehow lead to a particular separation of these regions from The City.

Figure 3: The British part of the global city network. Colors correspond to communities found without the integrative power of London.

Based on these results, one could say that internally, the UK is perhaps as divided as the European Union itself, i.e., it may not want to overestimate its unity. At least the corporate elite in the UK itself is strongly regionally oriented, albeit overshadowed by the integrative power of The City. Of course it remains to be seen what the precise consequences are of a Brexit on a corporate system such as the one considered in this blog post. Nevertheless, given the key position of London and the UK in the global network, it is likely that local changes in the corporate structure of firms in the UK can significantly influence both the UK as well as the global system as a whole, given the dominant position of, in particular, the city of London.

Apart from the results obtained above for the United Kingdom, we hope that this short blog post provides some insight in how network science is able to reveal patterns that are not directly visible from studying the data objects themselves, but are evident in the network perspective.

Frank Takes is a postdoctoral researcher in the CORPNET group at the University of Amsterdam. He obtained his PhD in computer science at Leiden University, where he is also appointed as a lecturer teaching courses on Business Intelligence and Social Network Analysis. His work in the CORPNET group focuses on methodological questions on (corporate) network analysis and data science related problems in general. E-mail: takes@uva.nl Website: franktakes.nl