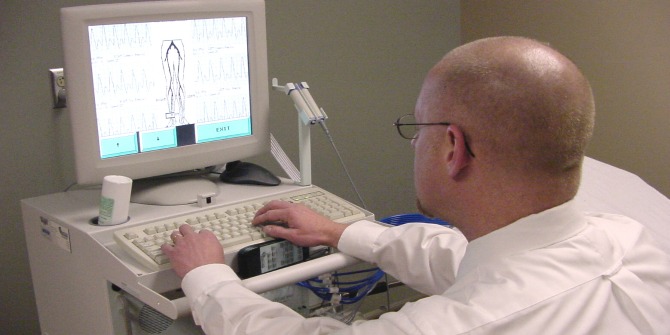 The NHS is buckling: the scale of the funding challenge is colossal, the service is under unprecedented strain and it is struggling to keep pace with relentlessly rising demand. So says the Commons Health Committee in its recent report into the impact of the 2016 Spending Review on health and social care. Things will only get worse post-Brexit – indeed there is already a ‘financial reset’ in place requiring the NHS to live within its means, including cutting the clinical pay bill.

Can technology be a big part of the solution to this situation? It might seem unlikely given the hi-tech fiascos of the last two decades, notably the NHS National Programme for IT that aimed to reform the way the NHS in England used information – abandoned after costing a staggering £9.8 billion and described by the Commons Public Accounts Committee as ‘one of the worst and most expensive contracting fiascos in the history of the public sector’. And only months ago, the Health & Social Care Information Centre branded IT projects in the NHS valued at £5 billion to be at ‘high risk of failure’.

If there is one lesson to be taken from this it’s that expensive top-down schemes are unlikely to succeed. But what about bottom-up initiatives that utilise the vast array of digital health products now available? From low-level gadgets through to traditional telecare/telehealth and on to emerging digital technology including mobile phones, apps and tele-video, the options are expanding rapidly. All of these make possible the maintenance of independence at home for longer, keeping people out of hospital for longer, discharging them from hospital more quickly, and all at less cost. This looks like a significant win-win for individuals, the NHS, and social care.

This is precisely the aim of the ‘Test Bed’ programmes in seven localities announced earlier this year by NHS England CEO, Simon Stevens – a move paralleled earlier in Scotland with its Technology Enabled Care Programme. There is good reason to think that building up successful interventions in this way can be highly successful. Reviews and studies suggest that technology-enabled services can indeed improve the quality of life of older people and their carers, reduce social isolation, increase perceived health status and security, and allow carers to balance care and work.

The NHS and social care can’t afford to get this technological option wrong, but like any complex issue there are huge implementation obstacles to be overcome. The first is to secure (rather than simply assume) commitment from the key participants – staff and users. Front-line staff are too often seen as passive recipients of new technology and are not involved in the development of systems’ architecture or user interfaces. Failure to convince them of the virtue of change can lead to all manner of resistance strategies arising from inadequate understanding, lack of time, challenges to established routines and fears around job security.

Users too, have to be convinced of the value of using new devices. Technology varies in the ways in which, and the extent to which, it requires engagement and action on the part of users. At one end of the spectrum, a telecare system based upon monitoring and surveillance may require little more than consent to installation of the equipment; at the other it needs active self-monitoring, self-management and engagement with the technology and with professionals. Where an active role for users is envisaged, issues of digital literacy and resistance come to the fore, and localities will need robust strategies to maximise technological familiarity.  A further barrier will often be found at strategic level – hard-pushed managers and policy-makers stumbling from hand-to-mouth will find it hard to invest time and money in a new and still relatively untriedmodus operandi.

It is clear that making policies and procedures on technology-enabled care work in practice is difficult. This is not unexpected given the multiplicity of stakeholders with different views on what it means, and the relatively early stage of the policy cycle. Currently there are tensions of many kinds – between innovation and tradition, between enthusiasm and digital Luddism, and between policy aspiration and achievement. What can be done to address this? A robust strategy will have three strands:

Despite the appointment of a new NHS Digital Director on a high salary, central policy remains weak and underfunded. We need to move beyond a small number of ‘test beds’ and set up a properly resourced strategy along with clear (but realistic) expectations of what will be achieved, in what ways, and over what period of time.

Monitoring frameworks like the NHS Digital Maturity Index and Local Digital Roadmaps need to be widened and strengthened to cover entire health and care systems – the future lies in joining up telecare and telehealth, not just having a paperless hospital. Making available free devices and apps to help people manage conditions like diabetes and heart disease (as is planned from April 2017 in England) is a useful measure but overall, current policy still resembles a hotchpotch of initiatives rather than a coherent strategy.

Secondly we need to develop the evidence base to establish whether, and in what ways, technological application can make a difference. Notwithstanding the success of some small-scale initiatives, the evidence base for scaled-up technology enabled support is still thin, especially in the case of telehealth – currently ‘in the foothills of a journey’ according to a comprehensive review by the Nuffield Trust. The last major study in the UK was the ‘whole systems demonstrator’ programme funded by the Department of Health which found mixed results but it should be remembered that this study is ageing and the pace of technological change is quickening.

Finally, there is the need to face up to the enormity of the digital revolution. The rapid growth of Information and Communication Technologies and innovation in digital systems represent a revolution that has fundamentally changed the way people think, behave, communicate, work and earn their livelihood. There is every reason to think this will apply just as much to the way health and care is delivered in the future, yet it tends to be perceived as an optional bolt-on to ‘normal business’. This won’t do.

Going ahead we need first of all a stronger organising vision – one that is informative, plausible, important and distinctive and will serve to legitimise and mobilise a new digital paradigm. This, in turn, must be underwritten by a transformation programme. Organisations will need to invest at least as much into programmes of organisational change as in the technology itself. This is precisely the sort of thing that should be integral to the local Sustainability and Transformation funding and planning process designed to implement the Five Year Forward View, but instead it is tending to be used to simply plug provider deficits. Finding the resources for change management, training and embedding new processes is a big challenge for organisations already operating at maximum capacity, and it would be reasonable to look to the Treasury to find ways to fund an ‘invest to save’ programme.

The prospects for a ‘Digital First’ NHS stand at a policy crossroads. Either we carry on with ad hoc, pump-primed local programmes that may, or may not, add up to more than the sum of their parts, or we take a paradigm-shifting leap. We set out a clear national agenda to be followed by action at local level to achieve what has been described as ‘digital congruence’ – culture, people, structure and tasks all aligned with each other. The challenge is complex and messy; the rewards potentially huge.

Bob Hudson is Professor in the Centre for Public Policy and Health, University of Durham. He tweets from @Bob__Hudson