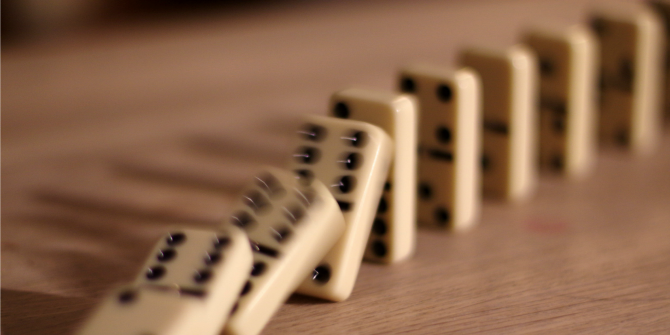 In a nutshell, macroprudential regulation is made up of two building blocks: surveillance and supervision. Surveillance is concerned with identifying, assessing and monitoring the build-up of systemic risks, i.e., those regarding the financial stability of a country or region. Supervision is aimed at preventing, mitigating and managing systemic risks.

A key lesson from the recent global financial crisis is that correct understanding, timely identification and effective handling of systemic risks are absolutely critical. This requires sound conceptual frameworks, effective tools to spot and manage these risks, and competent authorities that are able -and willing- to take prompt action about them. What does this mean for insurance as a key component of the financial system? What have regulators been doing with respect to insurance-specific macroprudential regulation? What challenges lie ahead? Let’s consider these questions.

At a conceptual level, insurance-specific macroprudential regulation takes into consideration the dynamics of the business as well as the nature of its activities. Insurers cash premiums first and pay claims later. In other words, when compared to banks, it could be said that insurers do maturity transformation the other way round. Their business does not create credit, sparing a key headache for those involved in macroprudential work.

Also, in insurance most insurable events like deaths, diseases, work accidents or car crashes are not tied to the -often cyclical- fluctuations of the economy. Instead, these events show empirical regularities that are inherent in populations. In other words, these regularities can be identified, calculated and, most importantly, predicted with reasonable accuracy. This is at the heart of insurance activities, as actuaries draw on population regularities to price insurance risks (e.g. our life insurance policy or our car insurance policy) and set money aside for future claims. Summing up, by staying away from credit creation and by structuring their activities based on empirical population regularities fundamentally foreign to economic fluctuations, insurers are immensely less likely than other financial sectors, especially banking, to generate systemic risks.

However, this is not always the case. Three examples can help in this respect. First, life insurers often offer investment products together with their life insurance policies. We buy these to supplement our pensions, or for other reasons. But if, as policyholders, we worry about the soundness of our insurer, we may want to cash in these investments, generating a run on the insurer, in many respects no different from runs on banks triggered by worried deposit holders.

Second, there are the reinsurers, i.e. insurer’s insurers, which take on so-called catastrophic risks. Catastrophic risks follow ‘acts of god’ like hurricanes or earthquakes that are difficult to predict. Extremely large catastrophes can potentially generate risks to the overall financial system. Reinsurers address this matter via, among other things, diversifying the risks they take. This is a key factor explaining why reinsures like to – or even need to – operate on a global level, pooling risks from many different corners of the world.

Third, many insures are in the business of insuring credit risk, which, more often than not, is tied to the fluctuations in the economy instead of responding to population regularities. The graph below, which compiles data from the US insurance market, illustrates this point. While the loss ratio (i.e. the relation between claims out and premiums in) of ordinary property and casualty insurers remains largely constant over a period of over 40 years, the loss ratio of mortgage insurers fluctuates dramatically, largely following the sways of the broader economy. 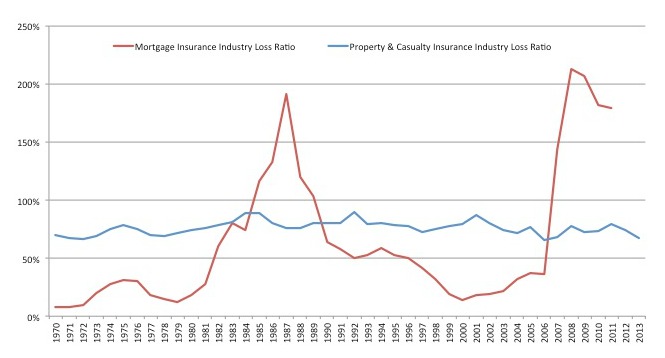 Looking into the conceptual nuances of insurance is important in order to better understand where systemic risks may come from, how they might look, and what could be done about them. In this respect, insurance regulators have developed and applied a battery of tools, including stress testing individual insurers -and the sector as a whole- in order to better understand insurers’ ability to, for example, cope with situations where insured events dramatically part ways with the historical experience of empirical regularities.

In addition, and with particular reference to reinsurance, the International Association of Insurance Supervisors (IAIS) has been engaged in the largest and longest macroprudential surveillance project know to insurance. Since 2003, it has been on the look out for any build-up of systemic risk in the reinsurance sector. IAIS has systematically tracked catastrophic risks, credit risks as well as risk management practices by global reinsurers. Crucially, in nearly 15 years of macroprudential activity the IAIS has not identified any systemic risks emerging from the reinsurance sector. This timely exercise is on-going.

Moreover, regulators have been engaged in identifying those insurers that due to their size, complexity or the type of activities they conduct, could be seen as being systemically important. To date, the Financial Stability Board (FSB), following consultation with the IAIS, has named nine such global systemically important insurers. These insurers are subjected to enhanced measures, including holding more capital, and following special resolution arrangements. No reinsurers appear on FSB’s list. National authorities, like the US Financial Stability Oversight Council (FSOP), have been conducting a similar exercise at the domestic level. This has met with some controversy, as one of the three insurers designated systemically important by FSOP challenged –successfully– the decision in court.

To sum up, there are important nuances that have to be considered when addressing macroprudential regulation in insurance. Unfortunately, these run the risk of getting overlooked as there is a growing trend among countries to place institutional responsibility over macroprudential regulation on central banks, which, with a few exceptions, do not oversee the insurance sector. Going forward, this may well be to the detriment of insurance, in particular its ability to pool complex risks emerging from an ever more globalised society.

Disclaimer: The views expressed by the author are his own and do not necessarily reflect those of the Bermuda Monetary Authority or of the International Association of Insurance Supervisors. The author remains responsible for any errors or omissions.

Marcelo Ramella is Deputy Director of the Financial Stability Department of the Bermuda Monetary Authority (BMA), Bermuda’s single financial sector regulator. Marcelo joined the BMA in 2005 and since then he has held positions in research, policy, international affairs and financial stability. He is also involved in the work of the Financial Stability Board and the International Association of Insurance Supervisors (IAIS). At the IAIS he is the Chair of the Reinsurance Task Force, the Vice-chair of the Core Curriculum Task Force, and a Member of Macroprudential Policy and Surveillance Working Group and the Index-based Insurance Working Group. Marcelo is National Public Accountant (Buenos Aires, Argentina). He has a Master in Business Administration from Bocconi University (Milan, Italy), an MSc in Organisational and Social Psychology from the London School of Economics and Political Science (LSE), and a PhD in Social Psychology from the LSE. In addition, since 2005, Marcelo has been a Visiting Fellow at the LSE. 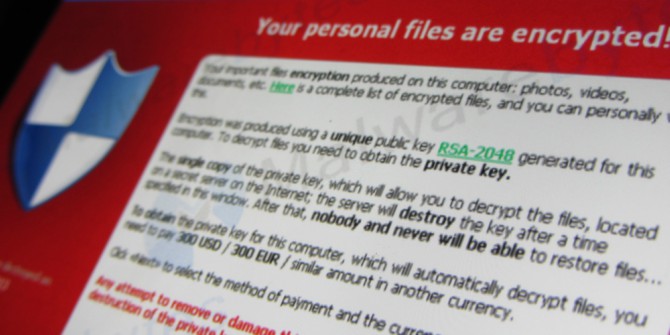 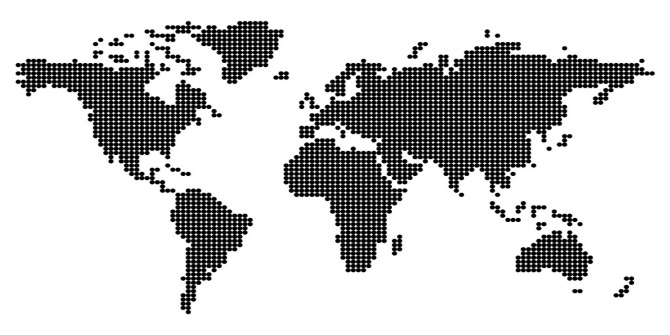 If you think ‘country’ when exploring new markets, think again