Sweat Equity: Inside the New Economy of Mind and Body – Book Review

Sweat Equity: Inside the New Economy of Mind and Body – Book Review 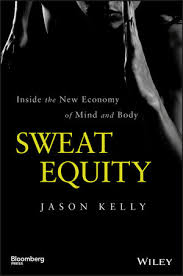 How much do you spend each month on getting sweaty? Most of us have some kind of financial relationship to exercise. Maybe your gym membership fee cycles out of your bank account (with or without trips to the treadmill). Perhaps your designer yoga pants double as café wear. Whatever your workout routine, you are bound to have noticed the voracity with which people are throwing money at fitness. In Sweat Equity: Inside the New Economy of Mind and Body, Jason Kelly delves into the subcultures fuelling this lucrative industry, using his financial expertise and fitness world connections to introduce us to investors and entrepreneurs who are making their fortunes in the ‘new economy of mind and body’.

Kelly is an accomplished author and the New York Bureau Chief for Bloomberg. He is also an avid runner who has completed over a dozen marathons. Having previously uncovered the illusive world of private equity in the well-received book The New Tycoons: Inside the Trillion Dollar Private Equity Industry That Owns Everything, Kelly here brings his own hobby and the wider industry of fitness under the magnifying glass, exploring all things sweaty from a business and investment perspective.

Why focus on the fitness industry? Kelly has plenty of figures to back up his interest in the sector. For example, fitness clubs in 2015 were estimated to pull in approximately $27 billion in revenues, with growth of roughly three per cent per year. Kelly calculates that with about 55 million members, this means that people are spending around $500 a year just on club memberships. That doesn’t even touch the premium going towards specialist gear – clothing, shoes, nutrition – or the events that the dedicated are signing up to, whether it’s serious US marathons or the more social-media-friendly Color Runs and Tough Mudders. Fitness is increasingly a part of our social identities – and we’re paying a significant amount to keep up.

A fascinating aspect of all this is the level of differentiation and strategy behind fitness industry business models. In the chapter ‘On Location’, Kelly demonstrates his impressive research and informed industry insights, outlining how high-end and low-end clubs are positioning themselves and competing for the fitness dollar. For example, Equinox is highlighted as an upper-end fitness club that attracts its affluent clientele by securing prime real estate in major US cities. Their advertisements, Kelly tells us, feature ‘Gorgeous, fit people in states of undress, confessing “Equinox made me do it”.’

This glamorous company, a hit with the Manhattan elite, was purchased in 2006 by a forward-thinking real estate developer, Related Companies. Buying the gym chain for $505 million, Related saw ‘an ability to marry their property expertise with the fitness megatrend’ (21). The affluent market being targeted by both companies overlapped – a synergy that Related is set to further capitalise on when they build a line of branded hotels, due to open in New York in 2019. The hotels will offer restaurants and rooms that suit the gym’s clientele as they travel (in luxury) for business. Kelly skilfully shows how this ecosystem is evolving, and how savvy investors are capitalising on the loyalty that fitness clubs engender.

By ‘following the money’, Kelly brings these complex investment relationships to light. He skilfully draws out the twists and turns of business strategy in a manner akin to a detective novel. For example, if you keep spotting ‘SoulCycle’ studios near Equinox gyms, it’s not a coincidence. The real estate developer Related owns both brands and chooses to run them adjacently, but separately, in order to benefit both from membership and pay-per-use revenue models. The world we wander through makes much more sense when these financial relationships are brought into the daylight. Revealing these connections and the reasoning behind them is where Kelly’s writing is at its best.

In the subsequent chapter ‘Barry and the Art of Boutique Fitness’, Kelly explores broader sociological and societal trends that inform the boutique fitness craze. We are told that members show up to smaller fitness classes, run by enigmatic instructors, because they long for a sense of belonging. Particularly effective, it seems, is the power of peer pressure: Kelly relays anecdotes of missing classmates being tracked down and dragged into class. These stories, amusing and tinged with the nostalgia of start-up mythology, are in Sweat Equity highlighted for their relevance to business success. While Kelly clearly respects the strategic nous of big business, it is his recollections of conversations with eccentric entrepreneurs that really convey his genuine interest in this diverse industry.

Exercise clothing and nutrition are also discussed. This chapter, entitled ‘Dress the Part’, does not share the compelling sense of story conjured in the earlier chapters. A lack of focus spills into the second half of the book, which reads like mostly disconnected news features on an array of topics, such as charity and executive training programmes. Perhaps surprisingly given Kelly’s personal experiences, the chapters that dissect aspects of the marathon industry were the least engaging. Fellow long-distance runners might relate better to these sections; however, the details did not give me a good sense of why people do this to themselves nor how business models are evolving around them. In particular, I wanted to know more about how technology is increasingly being used to connect lone runners. Are these developments embraced or rejected by the community? Less emphasis on history and event management and more on what’s new in this area could have helped pique interest.

Technology is of course becoming intimately entwined with fitness. Fitbit, Strava and Apple Watch are given brief attention towards the end of the book. These devices, the platforms they fuel and the datasets they generate are, however, surely where the money is, or at least will be in the near future. The habit of running straight to your computer after exercising is, as Kelly says, already common. I would have liked to learn more about how and where equity is being funnelled in this space and the strategic moves that are being made. The ‘new economy of mind and body’ is now so tied to the selfie, the segment, the social media feed – while these elements were referred to in Sweat Equity, the extent of their impact wasn’t explored in detail. Perhaps a sequel will delve into the financial world of the quantified self?

I recommend this book to those who are interested in business strategy and investment and to fitness fanatics who are ready to reflect on the industry they are consuming. The more sociologically-minded can also find insights into how and why we like to pay to sweat in groups. Kelly has interviewed an impressive range of influential players and the material he presents offers a window onto subcultural worlds that are truly fascinating, and which give a signal of things to come.

Sweat Equity is digestible in chapters and readers can choose the topics that interest them as each chapter stands largely alone. Kelly shines a light into the nooks and crannies of the US fitness industry. Overall, the journey is well-researched, informative and eye-opening. It is fascinating to learn about the origins of popular brands like CrossFit and SoulCycle. Understanding how these companies make their money sheds light on why we will continue to encounter these entities in our weekly routines and raises the question of ‘what’s next?’

Ella Hafermalz is a postdoctoral researcher at the University of Sydney Business School. Her primary research focus is the future of work: specifically, how technology is involved in the ‘work of belonging’. Ella is conducting research on the use of Strava in running practice. She has published conceptual and empirical research on gamification in the context of social media and graduate recruitment. Ella is currently involved in industry-partnered research on Fintech and emerging business models in the sharing economy in Australia.