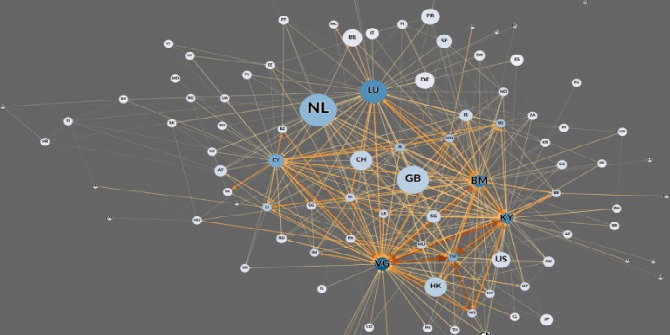 The EU made a move in August to force Apple to pay €13 billion in unpaid taxes. The episode has quickly become emblematic of the EU’s fight against corporate tax avoidance, a dispute which intensified in the aftermath of the 2009 financial crisis. As Europeans see it, this is about the need to provide a level playing field between US and EU businesses. If a UK-based retailer pays a lot more taxes than US-based Amazon, it will never be able to compete fairly. The OECD, “the organisation charged by the G8 and more recently the G20 to develop international standards as part of the fight against tax avoidance and evasion” saw its ambitions watered down after intense political pressure. In this article, CORPNET’s network analysis allows us to visualise how multinational corporations structure their ownership ties, a key element in tax avoidance.

Offshore finance is no longer the small and peripheral phenomenon it once was. During the last four decades, it has become a crucial element of the contemporary international political economy. Today, offshore financial centres (which can also be called tax havens or regulatory havens) constitute central nodes within global financial markets.

Gabriel Zucman has recently estimated that financial wealth to the tune of almost US$ 8 trillion is held offshore – a sum that amounts to almost 50 per cent of the GDP of the EU or the US. This causes a global tax revenue loss of approximately US$ 200 billion. Estimates of offshore wealth by the Tax Justice Network even range between US$ 21 trillion and US$ 32 trillion. Arguably, high-net-worth individuals (HNWIs) and big multinational corporations (MNCs) hold the vast majority of this offshore wealth, which leads directly to questions of increasing economic inequality.

The impact of offshore finance not only pertains to economic inequality but also to questions of corporate accountability and transparency – both of which are pivotal to the proper functioning of any market economy. For this reason, the Tax Justice Network does not use the term offshore financial centres or tax havens, but instead calls them secrecy jurisdictions, because secrecy and opacity are major reasons why foreign economic actors use these countries and territories.

With this secrecy and lack of accountability come big risks. The corporate scandals of Enron, Olympus and Parmalat as well as the near-collapse of the large hedge fund LTCM all involved subsidiaries in tax havens. In addition, these secrecy jurisdictions have functioned as legal domiciles for the creation of complex structured financial products, such as collateralised debt obligations (CDOs) and other asset-backed securities (ABSs). According to Photis Lysandrou and Anastasia Nesvetailova, these opaque financial products have contributed to the development of the global financial crisis, or at least have aggravated it significantly.

Despite these significant risks, offshore finance receives too little attention from regulators. Granted, the G20 have taken some (modest) measures after the global financial crisis to increase the regulation of offshore financial centres. Niels Johannesen and Gabriel Zucman have found that these measures have only caused a relocation of assets between offshore centres, but not a general decline of assets booked in these secrecy jurisdictions.

But the heat is on. In 2014, the International Consortium of Investigative Journalists (ICIJ) published a report that gained worldwide media attention: the “Luxembourg Leaks.” The ICIJ report revealed that the Grand Duchy of Luxembourg helped over 300 large multinational corporations to lower their global tax bills drastically, Amazon, McDonalds and IKEA for example. These big companies have channeled hundreds of billions of dollars through this tiny jurisdiction and as a result saved billions of dollars in taxes elsewhere.

Another example which has drawn a lot of attention is a tax construction known as the “Double Irish with a Dutch sandwich” that reduces taxes for large multinationals, such as Apple, by shifting international profits from an Irish subsidiary to the Netherlands then back to Ireland and subsequently elsewhere, e.g. to Caribbean tax havens.

In mid-2016, the European Union ruled that the special tax construction that Ireland has offered Apple constitutes an illegal and unfair subsidy amounting to over US$ 13 billion, which has to be repaid. Finally, the massive leak of confidential data concerning letterbox companies and trusts known as the “Panama Papers”, including data on over 200,000 offshore entities, caused widespread attention by the media and by academia alike.

A number of international organisations, such as the IMF, the OECD and others, started to publish lists of countries deemed to be offshore centres. Of course, such lists – even if initially based on relevant criteria – quickly become politicised and therefore often lose their value.

One definition of offshore financial centres that is well suited for empirical research is from Ahmed Zoromé: “an OFC is a country or jurisdiction that provides financial services to non-resident on a scale that is incommensurate with the size and the financing of its domestic economy.” This definition has the advantage that it is exclusively based on data.

The Financial Secrecy Index as well the offshore-intensity ratio follow this methodological approach. The Financial Secrecy Index combines a secrecy score with a global scale weight to produce a FSI–Value for each jurisdiction. The offshore-intensity ratio sets the aggregated amount of foreign capital booked in a jurisdiction (external bank deposits, foreign portfolio investment, and foreign direct investment) in relation to the size of its domestic economy. The result is a ratio that expresses the strength with which the particular jurisdiction has acted as a magnet for foreign capital.

Figure 1 shows the bilateral financial relations between the largest 34 jurisdictions of cross-border global finance. These transnational financial ties amount to almost US$ 82 trillion – slightly more than global GDP. You can read the figure as follows: grey are the countries least likely to be an offshore financial centre. Yellow are potential OFCs, such as Switzerland and the UK. Finally, the red countries have high offshore-intensity ratios, including Ireland, Luxembourg and the Netherlands. The magnitude of the spheres in the visualisation is equivalent to the sum of all their bilateral relations in the field of cross-border global finance. The largest jurisdictions are at the centre of the visualisation, the smaller ones are shown at the periphery. 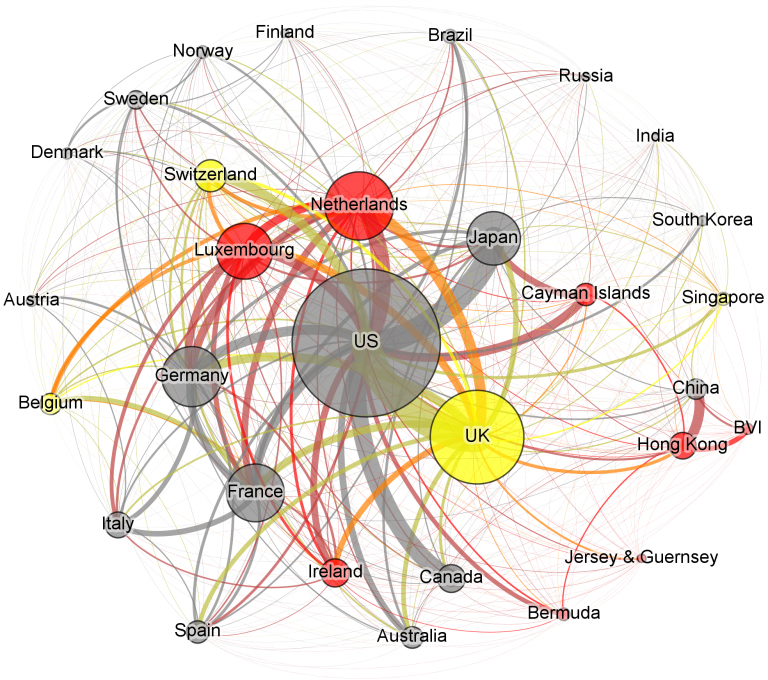 Both the Financial Secrecy Index as well as the offshore-intensity ratio are based on aggregated data, i.e. combining all foreign portfolio or direct investment that has been reported to international organisations. In fact, aggregated data are used by the vast majority of existing studies on offshore financial centres. However, it is in the very nature of aggregated data that many interesting and relevant details are conflated. This precludes the application of many innovative research questions and methods. Therefore, a promising approach to the analysis of offshore finance is to use disaggregated, granular data.

In the next step, CORPNET is going to focus on what we call “global ownership chains” (GOCs), which are corporate ownership relations (often via subsidiaries) that span across multiple jurisdictions, presumably in order to minimise and evade taxes, and to create secrecy and opacity. Here, we are inspired by and build upon research on “Global Value Chains” and “Global Wealth Chains”.

Existing research on corporate ownership chains is scant. The United Nations Conference on Trade and Development (UNCTAD) has published some groundbreaking research on ownership chains in its 2016 World Investment Report, among other things introducing an “investor nationality mismatch index” (also relying on Orbis data). We are going to complement and expand this emerging literature by identifying the (offshore) jurisdictions that play the most important role in global ownership chains.

Preliminary results indicate that only a small number of jurisdictions dominate GOCs – primarily the Netherlands, but also Luxembourg, the United Kingdom, Bermuda (BM), the Cayman Islands (KY), and the British Virgin Islands (VG) (see Figure 2). Thus, CORPNET is going to advance the research on offshore finance by analysing it as a complex network of transnational ownership ties.

Figure 2: The network of transnational ownership ties by value going through chains in 2015 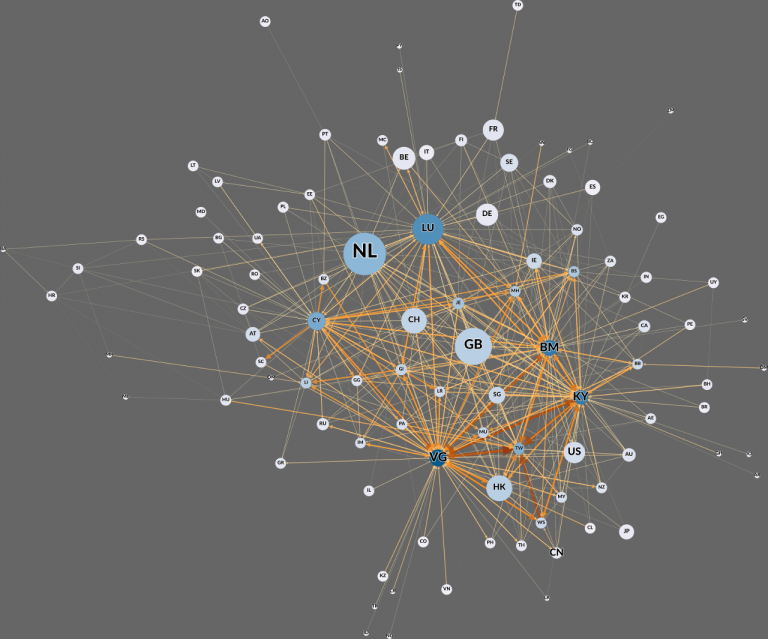 Source: CORPNET analysis by Javier Garcia-Bernardo based on Orbis data

Jan Fichtner is a postdoctoral researcher in the CORPNET project. He holds a Dr. phil. from the Institute for Political Science at Goethe-University Frankfurt (Germany). His research interests lie in the interdisciplinary field of International Political Economy, particularly Global Finance (concentration of corporate ownership and control, structural power, financialisation, hedge funds, offshore financial centres). He has published a number of peer-reviewed articles on the subjects of hedge funds and offshore finance. In the CORPNET group he focuses on the subproject of the re-concentration of corporate ownership through the rise of very large passive asset managers, such as BlackRock and Vanguard – and their impact on corporate governance.