Gastro-nationalism is rising across Europe

Gastro-nationalism is rising across Europe 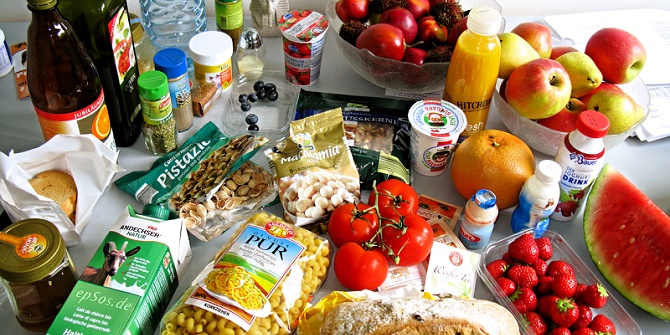 Photo by epSos.de, under a CC BY 2.0 licence, via Wikimedia Commons

Anyone who has gone shopping for groceries recently may have been struck by what seems to be a new trend: the increasing desire of food producers to indicate their country of origin when packaging their products. It is a phenomenon that is particularly prevalent in the dairy aisle, where milk, butter and eggs are frequently adorned with a country’s national flag.

Dutch dairy giant Campina makes sure to embrace its farmers’ milk by using the red, white and blue ribbon of the Dutch flag, while the Italians adopt their tricolore for the latte italiano logo. The American sociologist Michaely DeSoucey has memorably labelled this process ‘gastronationalism’, but how can we explain its rise in Europe and what are the potential implications?

Arguably the most blatant example of gastronationalism occurred in May 2013 when British retailer Tesco promised its Scottish consumers that it would from that point on only sell them Scottish poultry. Tesco’s decision was motivated by the horse meat scandal, where ready meals sold by British and Irish retailers turned out to contain various proportions of horse meat instead of beef. Subsequent investigations not only revealed the origin of the meat, but more importantly provided a rare insight into modern food logistics. The itinerary of the meat (both virtual and real) amounted to thousands of kilometres before it ultimately ended up in the frozen lasagne sold to British and Irish customers.

That Tesco sought to gain its customers’ confidence by guaranteeing the national origin of the meat is fascinating in its own right. After all, one could easily ask what kind of guarantee is really provided by merely limiting the area from which a product is sourced. Such an assurance in itself does not prevent food fraud. In reality, Tesco’s guarantee amounted to a strategy of trying to regain the confidence of consumers through the power of gastronationalism – the ‘use of food production, distribution, and consumption to demarcate and sustain the emotive power of national attachment, as well as the use of nationalist sentiments to produce and market food’, in DeSoucey’s words.

As a recent Eurobarometer study indicates, it is an individual’s national identity – and not their local or regional identities – that tends to be the most important in this context. Almost three quarters of EU citizens want to know from which country a product has been sourced, while only half of them are interested in the region of production and only a third show interest in whether the product has been sourced from inside or outside the EU.

What explains this new trend for signalling the origin of food products? From a historical perspective, eating habits and cultures have always been highly susceptible to foreign influence, with many national dishes having their origins in other countries (the popularity of curries and Indian cuisine in the UK is an obvious example). The height of this phenomenon could be found in the 1970s when Californians invented fusion cooking as an explicit attempt to merge different national food traditions. But today, we seem to be moving toward the opposite end of the spectrum, with ‘foodies’ and chefs embracing locally sourced produce.

We live in an age of ‘demarcation’, a term I deliberately take from the work of Hanspeter Kriesi and his fellow researchers, who have charted the transformation of the political space in Europe as a result of processes of globalisation and internationalisation. Their research has shown how political debates at the national level increasingly revolve around issues of identity, instead of the classic socio-economic themes that for a long time structured the political space.

In many countries the political battle between parties therefore takes place on the basis of cultural issues, with parties on the extreme right, who tend to put the greatest emphasis on issues of demarcation, arguing for restrictions on immigration and greater efforts to encourage the assimilation of new arrivals. Such positions also extend into the area of food politics. In its most extreme form we may think of the Front National’s criticism of the policy of many French schools to avoid serving pork to accommodate pupils from an Islamic background. Milder forms of gastronationalism can be seen when it comes to proposals to expand the current mandatory country-of-origin labelling rules in the European Union to all meat and dairy products.

While there is still considerable controversy about this at the EU level, some EU countries such as France and Italy are already introducing these rules at the national level. Earlier this year, on ‘World Milk Day’, which is held in May, the Italian Prime Minister Matteo Renzi told an audience of 5,000 farmers that ‘We have the right to know what we eat’. But there is more to this picture than food safety arguments alone: Italy’s agriculture minister has indicated that consumers would be willing to pay between 5 and 20 per cent more for products coming from Italy, turning the national labelling rule into a good business opportunity as well.

Such national initiatives are only likely to accelerate the shift toward gastronationalism. Soon enough other member states are likely to follow suit and introduce their own country of origin rules, making sure to delineate their country’s products from the rest of the world. In the first week of October, Finland and Greece did exactly that. For food producers this is something of a nightmare, as modern day production processes rely on ingredients that are sourced from multiple countries. The European Dairy Association, for instance, points out that it will only generate additional costs while not providing any additional guarantee of the safety or health benefits of a product.

And on this they may have a point. In fact, the simple requirement of indicating a product’s country of origin provides consumers with a false sense of security as it says little if anything about the quality of the final product. Mozzarella offers a good example: in 2008 the famous buffalo mozzarella from the region of Campania was the subject of a dioxin contamination scandal. Moreover, a single trip to any big Italian supermarket will teach you that Italy also produces large numbers of mediocre mozzarella varieties, while in the meantime Dutch dairy farmers produce mozzarella that rivals the best from Campania.

Ultimately, gastronationalism fits in with the revival of nationalism that we see everywhere across Europe. It is also as nonsensical and worrying as the broader phenomenon. Indicating the country of origin on your food will not make it any safer, nor will it tell us anything about the sustainability of what’s on your plate, as the distance food travels only has a very limited impact on the environment. For sure, we can make a case for food that ‘travels less’ in the sense of being less processed and more wholesome. That however is a property that is totally unrelated to the country of origin, which will only distract us even more from trying to make the right food choices.

Herman Lelieveldt teaches political science at University College Roosevelt and is the convenor of the Utrecht Summer School on Food Politics in the EU. He is currently a Visiting Fellow at the European University Institute where he works on an English edition of De Voedselparadox (The Food Paradox. Why it is so hard to make our food system more sustainable (Van Gennep, 2016).