Why Aren’t They Shouting? A Banker’s Tale of Change, Computers and Perpetual Crisis – Book Review

Why Aren’t They Shouting? A Banker’s Tale of Change, Computers and Perpetual Crisis – Book Review 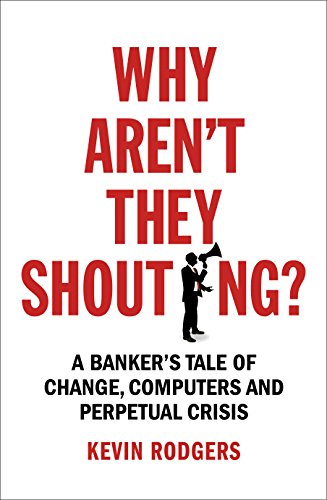 Overall, the narrative is lively and engaging – Rodgers takes your hand and walks you through the history of finance over the past thirty years in as effortless a way as if you were sat near him at a dinner party. (Though that is assuming you are keener to listen than a character in one of his post-financial crisis stories: she sat near him at a dinner party, and when she asked what he did, he joked he was a child slave trafficker. She was understandably shocked; but after he explained that he was a banker, she exclaimed that she would have preferred for Rodgers to be a child slave trader. Indeed, the author also cites a German poll of public attitudes where the bankers were seen as the antepenultimate profession to be friends with, coming only before convicted criminals and sex workers).

The book takes us through the lived experience of the 1994 Federal Reserve rate rise and bond crash that followed; the 1997 Asian crisis; the 1998 Russian default; the 2007 downgrade of Collateralized Debt Obligations (CDOs) by the credit rating agencies; and the 2008 collapse of Lehman Brothers, with just enough depth to understand it better than you did before but without being boring.

Maria Zhivitskaya completed a PhD in Risk Management from the LSE Accounting Department in 2015, worked for Goldman Sachs afterwards, and currently works for Prudential plc.