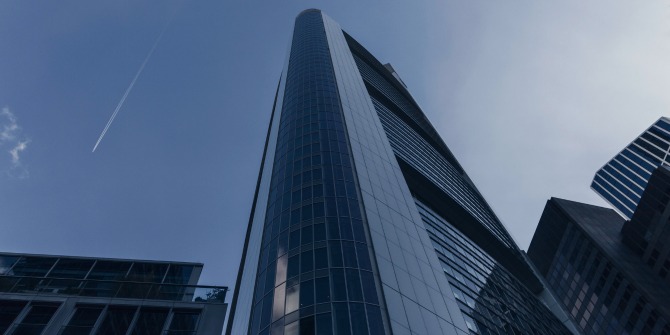 Commerzbank Tower, by David Schiersner, under a CC-BY-2.0 licence

Bank lending to the real economy has still not recovered from the financial crisis in Europe. This problem is pervasive because of the relevance of the bank lending channel. About 80 per cent of companies’ debt financing is based on bank loans in Europe, while only 20 per cent is based on the issuance of corporate bonds. Different from this is the US, where bond issuance sums up to nearly 90 per cent of companies’ debt financing. While the US Federal Reserve Bank can target companies’ funding conditions by influencing market-based reference rates, the European Central Bank (ECB) aims at influencing lending conditions via targeting banks’ funding conditions.

Despite the ECB’s efforts, lending conditions are still fragmented in the eurozone. European banks recovered at a different pace from the last crisis, depending on the economic recovery of their home country and the efforts of their governments to recapitalise them. Bank supervision is highly relevant to the smooth functioning of monetary policy, because bank lending can become restrictive when banks need to achieve higher regulatory capital ratios.

The reason why a credit rationing can happen in times of scarce equity capital is based on the fact that it is optional for banks, whether they achieve their capital ratios by an increase in the numerator or by a reduction of the denominator. For the increase in the numerator, banks can either issue stocks or retain earnings. Since stock prices have plummeted for half of the systemically important banks in the Eurozone by more than 56 per cent compared to their pre-crisis level, stock issuance is off the table for most of them, and the retention of profits, mainly interest rate income, is hampered by the persistent low interest rate environment. As a result, the reduction of risk-weighted assets is the dominant way of increasing capital ratios, and that’s why lending to businesses is currently tight in several Eurozone countries.

Under those circumstances the ECB is pushing on a string. In addition to lowering the borrowing conditions for banks through the purchases of sovereign bonds and covered bonds, the ECB intends to incentivise banks to lend by means of a negative interest rate of currently – 0.4 per cent on banks’ reserve holdings and by targeted longer-term refinancing operations (TLTROs), which allow banks to borrow at a negative, but not lower rate than – 0.4 per cent, if they have lent sufficiently to the economy. But instead of lending to business and households, banks preferred to increase their exposures to sovereign debt (figure). In times of scarce equity capital, holding reserves at the ECB and holding sovereign debt become perfect substitutes, because both do not count as risk assets in banks’ capital requirement regulation. 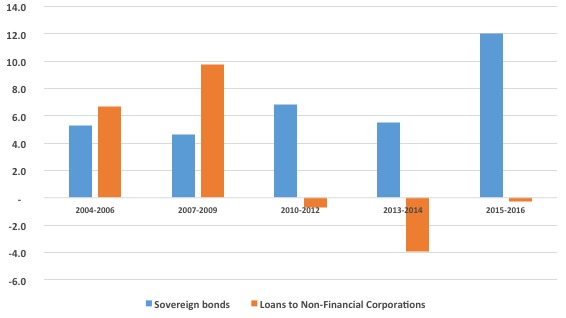 In November 2014 the ECB started its Asset-Backed Securities Purchase Program (ABSPP) in order to foster bank lending. Thereby banks could free equity capital for new lending by repackaging existing loans into asset-backed securities (ABS) which they could sell to the ECB. In an ABS transaction the issuing bank sells a loan portfolio to a special purpose vehicle (SPV), which refinances itself through the issuance of bonds, i.e. ABS. However, the outstanding amounts of ABS on the ECB’s balance sheet summed up to only €20.1 billion in September 2016, which is tiny compared to the €223.5 billion of covered bonds and €1001.9 billion of sovereign bonds the ECB has purchased up to now. The ineffectiveness of the ABSPP lies in the fact that the ECB has only accepted ABS based on high quality loans. But it is the banks with high amounts of non-performing loans whose loan supply is weak.

The European Commission is aware of companies funding problems and therefore launched the Capital Markets Union action plan last year. The aim of this action plan is to strengthen capital markets in Europe and to develop the EU’s financing system further towards a more market-based system like the US has. One crisis lesson has been that companies with access to capital markets face less severe financing restrictions when banks got into distress compared to companies which rely predominantly on banks for financing.

The greatest potential in deepening capital markets is expected by a revival of securitisation. Illiquid loans can thereby be transformed into liquid securities which can be purchased by capital market investors. Thereby, securitisation can foster the loan availability especially for the bank-dependent small and medium-sized companies. In addition to that, credit risk can be distributed across different market participants and different regions by means of securitisation, thereby fostering geographical risk-sharing and financial integration in Europe.

The Commission’s proposal for simple, transparent and standardized (STS) securitizations was intended to revive confidence in European securitizations, but the markets have still not revived yet. Practitioners refer to the high legal uncertainty about which securitizations qualify as STS. Moreover, STS are currently unattractive to investors, because the capital requirements for STS are too tight in relation to their default rates. Investors’ demand for sovereign bonds with the same default rate as an STS-securitization is higher because of the lower capital requirement for sovereign bonds.

In short, a Capital Markets Union is needed to enhance financing the economy, improving monetary policy transmission and geographical risk sharing. Reviving the market for securitizations is vital for achieving these goals, because it connects the dots between the traditional European bank-based financial system with market-based financing. A prerequisite for European capital markets to evolve is a level-playing-field between sovereign bonds and other asset classes.

Markus Demary is senior economist in the research unit financial and real estate markets at the Cologne Institute for Economic Research (Institut der deutschen Wirtschaft Köln). He studied economics at the Rheinische Friedrich-Wilhelms-Universität Bonn and he holds a doctoral degree from the Christian-Albrechts-Universität zu Kiel. Moreover, he is lecturer for Behavioral Finance at Ulm University.