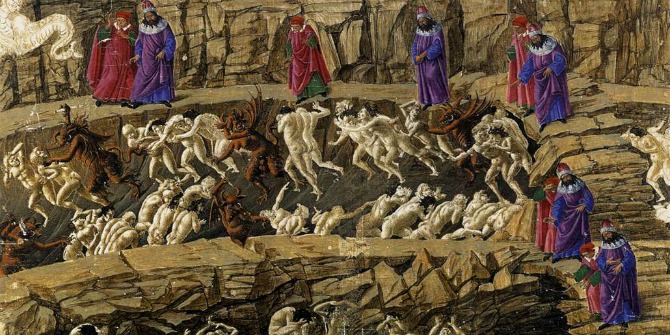 Perversion happens even in the best of companies. One can encounter it in education, in big multi-nationals, in handicraft businesses, or in a small neighbourhood store. Yet no matter where a ‘pervert kernel’ crops up, its victims suffer.

Psychoanalysis offers us important tools for understanding the darker side of relational complications in the workplace. The idea of pervert kernels refers to a dynamic coalition of people powerfully organised within a wider group. In workplaces, a pervert kernel is a group of people centred around a person who organises them against one or more colleagues in an insidious manner – poisoning their relations, undermining the value of the others’ labour and, spreading despair on people outside of the coalition. These kernels involve an alliance which acts parasitically, distorting real facts and perverting them for narcissistic and at times material gains. On a psychological level, a shared fantasy of indestructibility and impenetrability is realised.

The actions of pervert kernels in work environments are founded in a kind of delusion of grandeur, even though they do not appear as such. Indicative of this is the certainty of invulnerability and the sense of omnipotence that people in these groups share, which surpass the boundaries of a mere fantasy. It is a sort of delusional certainty, a kind of “madness” whose symptoms are manifested in others. Nonetheless, the ways it is implemented are socially adjusted in every respect.

More often than not the leader of such a perverse team is someone who holds a secondary or ancillary position and someone who does not want to progress or go somewhere else. Most of them create a position of counter-leader. Furthermore, kernel leaders can be people who simply cannot tolerate the abilities of colleagues, so they try to undermine their work, their position or their image in the eyes of others. Yet for this pervert alliance to be sustained, it needs to be concealed. Secrets and silence are the principal and implicit rules making the experience of working alongside a pervert kernel disorienting and puzzling.

To understand pervert kernels we can draw on what Racamier (1992) called ‘pervert thought’, understood as the exact opposite of ‘creative thought’. Pervert thought is not motivated by curiosity or emotions, nor is it interested in engagement with other thinkers or ideas. Rather pervert thought is motivated by the desire for mastery, for action and manipulation of others. It is fundamentally narcissistic and megalomaniac.

An individual with this kind of thinking has an exceptional competence to promptly perceive the abilities and weaknesses of another person, and then use them against them. Hence, they are a ‘pervert narcissus’ (Racamier, 1992), capable of luring the other into artificially constructed contradictions, hints, allusions and lies, through an extremely competent use of language. In due course, they will manage to discredit and isolate them from the group of people they are working with and in which they have invested. The pervert narcissist (Racamier, 1992, Hirigoyen, 2012), who is the inconspicuous inspirer of this team, is a person who readily lies, degrades and accuses others without any sense of law (Clavreul, 1967).

The goal of such a person is to attain a devious and veiled influence. Moreover, they aim at the disintegration of others, at a kind of destruction of the group, no matter how small or big it is. In work environments, they orchestrate around them pervert kernels in an insidious and methodical manner.

As repellent as these pervert narcissists might be, we need to reflect how the narcissistic ideals of our era create fertile ground for these kernels to become established. The promotion of an individual without deficiencies, who is better than all the others – the ‘successful’ one, or even the omnipotent one – transforms the culture of our working lives into superhuman ventures which compress human endurance. In this narcissistic model of being at work, we are all seduced into transforming into avatars that can achieve imaginary goals at a speed which is not humanly attainable. These are narcissistic tales of an era, which eventually nurture even more depressed and deprived narcissists who in turn attempt to survive work by poisoning the people around them.

The psychopathologies of working life are symptoms of a deeper morbidness at the level of the social, of the ‘Οther’. Within psychoanalytic thinking if we are to avoid becoming a casualty of this workplace perversion we need to return to the domain of humanness, one that holds onto our sense of limits, of emotional contact, of reality, realistic satisfaction and achievement. Without this we simply won’t survive.

Daniella Angueli (PhD, Psychoanalysis) is a Honorary Research Fellow at Birkbeck University London, Department of Psychosocial Studies. Her recent research focuses on the pathological forms of human instrumentalisation and unconscious states of submission to an authority from a structuralist psychoanalytic perspective. She is also a clinical psychologist in private practice. She is a member of the Laboratory of Psychopathology of the University Rennes 2, France, and member of the French Society of Psychology (SFP), France.