A matter of principles: the psychodynamics of solidarity in trade unions

A matter of principles: the psychodynamics of solidarity in trade unions 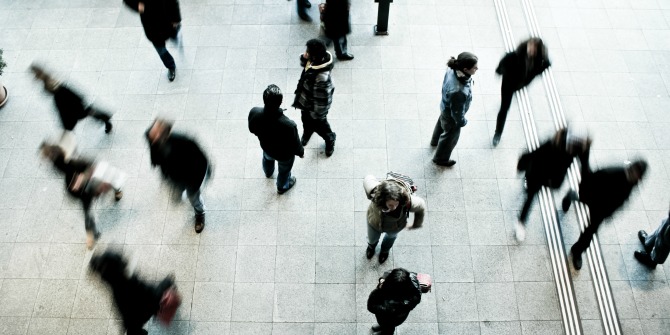 People walking on gray pavement, by Unsplash, under a CC0 licence

Despite women working in higher education still being paid 12 per cent less than men and half of all teaching staff on precarious contracts, last month 57 per cent of my union’s members voted against taking industrial action over decent pay in education. You don’t need to be an internationally recognised expert in industrial relations to do the solidaristic maths.

People, at what point did we trade in protection at work for the short lived comfort of protectionism?

Up until this result I had been entertaining the feeling that as I get older I get cooler. As a feminist trade unionist working in mental health I can clear a room, but these days the capacity to spot a fascistic future early enough to do something about it has high societal currency.

We have had a bad year for fairness and like most of you reading this blog, I’m sad, tired and angry. At one point in November I remember waking up thinking ‘my entire working life was a total waste of time’. I bought make-up to cover up my inability to regulate my emotions at work and I listen to Public Enemy, like a lot.

Although the dominant narrative about trade unions within liberal market economies is that they are outdated and defunct organisations, the current economic conditions mean they are the only show in town. Seriously, it’s hard not to laugh out loud at the prospect of a political class who have never worked for money defining an industrial policy without trade unions. With no actual government strategy and the disenfranchisement of the growing majority of low wage workers in the UK, who exactly do you think knows how to resolve this?

Apart from the fact that trade unions continue to be the largest workplace membership organisations in the world, it’s only when trade unions can operate that basic stuff like living wages and rights at work can be secured. Bluntly, the more trade union members there are the higher the union negotiating power, leading to higher wages and decent jobs. It’s just weird to suggest otherwise.

One of the problems of being a trade unionist – apart from victimisation and a downward pressure on your promotion prospects – is that you’re part of an imperfect system. In the fallout from Brexit, I spent a lot of time on anti-racism demonstrations and cringed at the absence of trade unions banners. Activists were there, our organisations not. Stunned that the race card had divided the workers yet again. Back to the 1970s, minus the great music.

When Stand Up to Racism happened and the real deal of local anti-racist activism in this country came up for air I was proud to see my union on the list of organisations that had sponsored the campaign. But I’ll admit that when my General Secretary stood up to make a speech I didn’t clap. Surly maybe, but it left me with a question about how it is that my own union couldn’t join the dots between fairness for migrants and fairness for the women and hourly paid workers in my union. How did equality get traded in so easily?

I’m going to get a bit Industrial Relations on you now. It’s what I do.

For several decades, there has been a general decline in traditionally strong trade union memberships across Europe. Since 2008 we have seen a decline in national level collective bargaining and large scale cuts in public sector jobs, renewed privatisation, and a massive growth in underemployment and temporary contracts. This has contributed to a decline in public sector union membership, the stronghold of trade unionism globally, and has put a downward pressure on union power in relation to wages and job security.

In the meantime precarious work has grown, faster than we could ever have imagined. In universities we now have 50 per cent of university lecturers on hourly paid contracts. Yup, 50 per cent of staff have no real protection at work. Almost funny for those of us teaching employment relations to the next generation of managers.

That’s not to say that all precarious workers don’t organise – many do and all over the world too. From the Colombian contract miners to the Deliveroo workers in the UK, push people far enough and they will organise. Sometimes established unions are part of these organising drives, sometimes not. Either way, the motivation to join a union that provides genuine protection is getting stronger.

The reasons that you may not get to hear about these sustained organising campaigns are multiple.

Firstly, the daily grind of organising workers in the current climate is literally exhausting. In my experience the people doing it are modest and brave and the last people on earth to tell you about the good work they are doing. Trade union organisers are the best kept secret of workplace survival in this country.

Secondly, the reasons why people associate with the people around them are not straight forward. Solidarity is a central organising principle for trade union activity, referring both to the principle of common action with others and to the identification of one’s own interests with theirs. Although some conceptions of solidarity presuppose a shared collective identity – such as class – increasingly the diversity of workforces and trends in labour migration cannot assume a homogeneity of identity. A solidaristic model of cooperation has historically been underpinned by class identification and a focus on collective interests, something that does not cut it if you’re asking an hourly paid lecturer to go out on strike over pensions.

Solidarity understood as an identification between homogenous groups of working people is increasingly not responsive to the diversity of working people’s lives and political positions. As a result, the issue that unions are constantly needing to address is how to build relationships between increasingly insecure and precarious working people sufficient to mobilise collective action.

Thirdly, there is an inherent tension between the two faces of trade unionism, the ‘sword of justice’ where unions defend the oppressed and underprivileged and a model of ‘vested interests’ where the focus is on defending particular interests of a smaller group of increasingly elite workers. As a result, the fundamental question for trade unions rests on how they can mobilise workers in defence of collective interests and values despite the splits between us.

The psychodynamics of trade unions are important here. Solidarity is often understood within unions as solidarity against a political or economic actor. For unions in hostile environments a common defensive position is to locate and project all problems in external actors, as a way of creating a cohesive group identification. Acts of solidarity carried out against an employer for example, can powerfully build what Turquet calls ‘oneness’, observable in groups of workers engaged in workplace organising. Them and Us.

Because of this, there is a strong potential for becoming ideologically defended, a defence of ‘being in the union’ that denies difference and relies on a group mentality that maintains a sense of belonging. This way of functioning tends to highlight intra-group conflict while underplaying inter-group conflict where the diversity of memberships and individual difference are denied.

The problem is that to really build solidarity we have to grow up and accept that unions are both including and excluding. To accept that we walk a thin line of being identified enough with some central principles to actually do something for each other but not so over-identified that we can’t stand the real diverse nature of working people.

These societal changes mean widening the organising model towards a relational model of solidarity where trade unions create spaces where working people can understand societal and industrial changes taking place, build dialogue and strong solidaristic relationships in situations of industrial conflict that can mobilise members to act over collective grievances and social justice in a context of diminishing resources.

There is a compelling regressive fantasy of ‘in or out’ that is settling in our unions that now needs to be challenged. Historically critical insiders, particularly labour academics, take a sustained beating for raising public debates about the future of unionism. This doesn’t help much, leaving the important and difficult conversations about the future of workplace organising to green room discussions by an increasingly limited gene pool of functionaries.

At the end of the Stand Up To Racism event a woman from Thanet stands up and says:

“I don’t need a lecture from you lot on the stage about neoliberalism – I need help and support to talk to the people I live with who are not actually racist, but voted to leave the union. This is a daily slog that I do because I can’t afford to move anywhere else. We’re stuck together and I need help making it as good a place as I can.”

To organise solidarity in the current climate means allowing people to be critical of what is going on in their union. If we are to live the grown up politics that are needed to really build solidarity at work we all just have to get stuck in and build our relationships at work. Join a union  and battle it out with the people who are both in and out of that union. Without defending the principles of solidarity that underpin social justice, protection at work becomes just protectionism. It’s the principles, stupid.