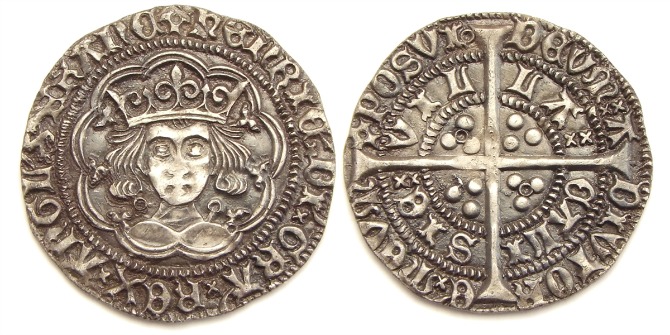 It’s a disaster!  All the big city lenders are scaling back, or outright refusing to lend. Major players are going bust.  Overseas markets are collapsing. Regional distributors can’t get sufficient credit. Goods are piling up in warehouses. People are crying out to parliament for a major cash injection. New restrictive, even pernicious, lending practices are emerging. The economy is spiralling into to the depths of a lasting economic slowdown. At a glance this seems a recent and familiar story, but year is not 2008, it is c.1422, the low ebb of currency supply in medieval England.

To put things in perspective, in 1351 there were about 56 silver pence in circulation per head of the population, but by 1422 this had fallen to just 13 pence, sparking frequent complaints to parliament about deteriorating coinage. In medieval England, silver pennies, half-pennies and farthings accounted almost exclusively for the monies used in daily life. London merchant-creditors dominated English trade. Increasingly aware of the shortage of coins, and wary that their potential debtors may not be able to find the coin to repay them, Londoners began rationing credit, precipitating a crippling credit crisis that radiated outwards across Britain.

Thousands of fifteenth-century Londoners’ lawsuits, in which they sought unpaid debts, are stored in The National Archives, in Kew. I, and Dr Jonathan Mackman (University of York), have published lawsuits detailing c.2,500 debts owed to Londoners, in English, on British History Online, free to view. These detail three kinds of debt: debt on a cash loan (avg. £5); debt on a sale of goods on credit (avg. £10); and debt on a bond (avg. £20 – a medieval ‘bond’ was a non-transferable instrument amounting to a written ‘I owe you’).

Figure 1. Sum of the average value of London creditors’ loans, sales of goods, and bonds (20 shillings = £1)

Figure 1 sums the average value of cash loans, credit sales and bonds by decade in the 1400s.  This helps to capture the scale of the economic collapse which took place between the 1390s and the 1420s. By 1422, when the economy hit rock bottom, coinage per capita in England was less than 24 per cent of what it had been seventy years earlier, and the limited recovery of the 1430s and 1440s was driven only by the government frantically minting and circulating coins from its cross-channel mint in Calais, in a desperate attempt to revive England’s anaemic international trade. Only with the death of Richard III and ascent of the Tudor kings, Henry VII (1485) and Henry VIII (1509), would sustained domestic minting begin to again meet the needs of the realm and aid recovery.

Oxford historian Pamela Nightingale has explored the records of London Ironmonger Gilbert Maghfeld, one of the few medieval London merchants for whom we have business accounts. Maghfeld’s records show that he reacted to the faltering economy of the 1390s by reducing the total value of his transactions by half, and shifting to money lending. Between 1390 and 1395 he increased the share of credit he offered in cash loans, as opposed to sales of goods, from about 25 per cent to 95 per cent, but to no use. Maghfeld went bankrupt and did not live to see even the partial recovery of the 1430s.

Further proof that the depression was brought on by Londoners throttling back credit is evident in the more lender-favourable terms London creditors forced on credit-starved borrowers. Around 1400, only about 15 per cent of cash loans were deemed ‘payable on request’, as opposed to on an agreed timetable. This rose to 25 per cent in the 1420s, over 82 per cent in the 1430s and over 90 per cent thereafter. Sales of goods on credit followed suit, with credit sales ‘payable on request’ rising from 25 per cent to over 85 per cent.

These loans, stifling to long-term investment and trade, left the debtor with no repayment buffer except the few weeks/months required to sue him. Long lists of outstanding debt judgements show that the use of ‘payable on request’ agreements resulted in creditors swarming, like a ‘run on the bank’, when a merchant debtor should become insolvent, each hoping to recover from the debtor’s assets. The normalisation of debts as payable on request, from the 1430s, must have hamstrung the debtors to London creditors, as they were themselves regularly creditors to less affluent traders and clients who would in turn have been given the same harsh terms.

Terms of repayment for bonds also became more lender-favourable. First, bonds stipulating a single payment sum and date were replaced, in the 1420s, by penal bonds with a larger court-enforceable face value and a smaller payment value written on the back that, if paid, would negate the face value. Moreover, single penal bonds stipulating one repayment date were increasingly replaced by multiple instalment-payment penal bonds relating to the same debt, with failure to make any payment invoking recovery of the penal sum on the face of the corresponding bond. By 1500, fewer than 10 per cent of bonds recorded in lawsuits were demonstrably a single bond reflecting the whole of a debt.

Overall, Londoners’ debt lawsuits provide robust evidence of the effects of a pre-modern liquidity crisis, which transformed lending practices and crippled the economy for a century.

Matthew Frank Stevens, FRHistS, is senior lecturer in medieval history at Swansea University and fellow of the Royal Historical Society (2010-present). He completed a PhD in history at the University of Wales, Aberystwyth in 2005 and has since been a postdoctoral fellow of the Economic History Society at the University of Oxford (2005-6), researcher at the Institute of Historical Research, University of London (2006-10) and visiting fellow at Nicolaus Copernicus University, Toruń, Poland (2010).  He has wide ranging interests in the interrelationships between the economy, law, gender and race in the medieval and early modern periods. He is author of Urban Assimilation in Post-Conquest Wales: Ethnicity Gender and Economy in Ruthin, 1282­­-1348  and is currently preparing his second book, Race Law and the Origins of National Identity: Northern Europe in the Middle Ages for Manchester University Press.  He may be reached at m.f.stevens@swansea.ac.uk .