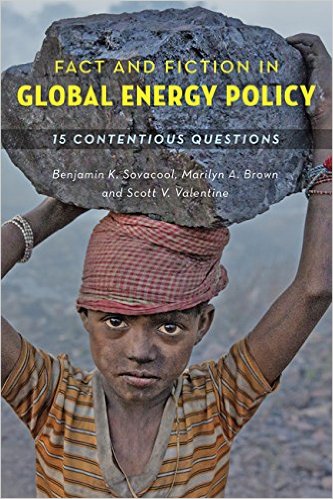 Global energy policy has become the focus of intense public debate and contention. For much of the twentieth century, energy policy was primarily about how to secure a steady supply, most of it derived from coal, oil and gas. In recent years, however, the world has woken up to the fact that our reliance on carbon-intensive fossil fuels poses a severe threat to the planet’s health. While we continue to consume ever more energy worldwide, the search is on for a radically different global energy system. The key question today is whether humanity can manage to wean itself off fossil fuels before global warming becomes an irreversible environmental catastrophe?

Anyone interested in understanding what is wrong with our current approach to energy policy and what options we have for averting the looming climate crisis is faced with a range of complex questions and dilemmas: should we try to curb investment in all fossil fuel energy sources or increase shale gas production in order to reduce the burning of coal, the most polluting of all? Is energy efficiency a worthwhile investment, and does nuclear energy offer a reliable, safe and cost-effective alternative to fossil fuels? Should we promote or outlaw geo-engineering? Should governments keep their hands off energy markets, or do we need more state intervention to accelerate the transition to low-carbon energy sources? And if greater market regulation is needed, which policy interventions are most effective?

In their book Fact and Fiction in Global Energy Policy: 15 Contentious Questions, Benjamin J. Sovacool, Marilyn A. Brown and Scott V. Valentine provide an essential guide to the global debate on how to create a more sustainable energy system. The authors are driven by a desire to bring much-needed sense and perspective to the often heated and politically charged debates about future energy choices. This is not an easy task. For, as the authors themselves point out, competing ideological frames often get in the way of rational and empirically informed discussion. But they nevertheless maintain the hope that their critical investigations into some of the most contentious issues can ‘educate and inform readers by pulling back the curtain to reveal some of the precepts underlying contention in energy policy’ (352).

The book is structured around fifteen key questions that deal with the environmental shortcomings of current energy sources, the potential for developing alternative energy technologies, the options for dealing with climate change and the implications for energy security. Each chapter follows a straightforward pattern, with the authors first setting out two opposing views to a given question and then attempting to reconcile them or offering a middle- ground perspective. By following this three-step approach – loosely modelled on the dialectic of thesis, antithesis and synthesis – the authors manage to convey a sense of the lively debate that surrounds these topics while putting forward their own distinctive interpretations. It is this combination of objective review and distinctive argumentation that makes Fact and Fiction such a rewarding and engaging read.

Among the most successful chapters are those that tackle real policy dilemmas. Chapter Five, for example, deals with the question ‘Is Shale Gas a Bridge to a Clean Energy Future?’ While shale gas production has become a booming industry in the US, its future in Europe remains uncertain due to concerns over environmental impacts and regulatory barriers. The authors first survey the pros of the new technology: shale gas is abundant and affordable; it is the cleanest of all fossil fuels; and its exploitation holds the promise of boosting employment, tax revenues and economic growth. Following this, the book then turns to examining the main counter-arguments: the process of extracting shale gas is prone to causing water pollution; it turns out to be much more expensive if the necessary environmental protection measures are included in the calculation; and it runs the risk of slowing down investment in even cleaner sources of energy, mostly renewables. In concluding, the authors make the sensible suggestion that the costs and benefits of shale gas are distributed unevenly and manifest themselves at different scales. The common ground position is thus to treat shale gas production only as a short-term solution, as a bridge towards cleaner energy sources provided it is governed by tight regulations.

Some of the less successful chapters deal with questions that address seemingly difficult dilemmas but no longer pose major challenges in contemporary policy debates. This is the case, for example, with Chapter Nine on ‘Is Mitigation or Adaptation the Best Way to Address Climate Change?’ This question may once have been a thorny issue in international climate politics. Indeed, during the 1990s, the UN climate regime strongly prioritised mitigation over adaptation, but this divide has since been toned down considerably. Cutting down greenhouse gas emissions and adapting to a warming climate are now recognised and supported as important policy goals. The common ground position that the authors advocate – ‘adaptation and mitigation should be co-optimized’ (201) – thus comes across as a bland restatement of what has become a common-sense position.

Despite this, the book has many strengths and is highly recommended to anyone who is keen to understand the most pressing issues in global energy policy. The authors manage to inject a rational tone into what is often a shrill debate, and their survey of the research and policy discussions is a real tour de force that will be of benefit not only to students but also practitioners of energy policy.

Robert Falkner is an Associate Professor in International Relations and the Academic Director of the TRIUM Global EMBA programme at LSE. He is also an associate of the Grantham Research Institute on Climate Change and the Environment. He is the editor of The Handbook of Global Climate and Environment Policy (paperback edition Wiley, 2016) and author of Business Power and Conflict in International Environmental Politics (2008).