How credit rating agencies calculated their ratings during the Eurozone crisis

How credit rating agencies calculated their ratings during the Eurozone crisis 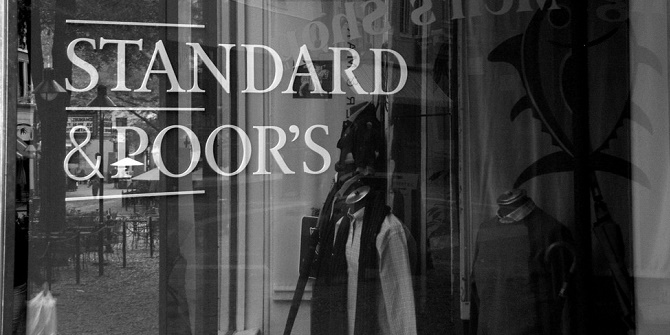 This is not a trivial issue because sovereign credit ratings provide a measure of the probability that a country will default on its debt obligations. In that sense, they set the tone for borrowing costs in international markets both for a sovereign state and the financial institutions operating in it. This is vital for stimulating investments and supporting sustainable economic growth.

Over recent years, credit rating agencies have received notable criticism by policymakers. Speaking, for instance, at the European parliament in May 2010, then President of the European Commission José Manuel Barroso heavily criticised the three main agencies, noting that “deficiencies in their working methods have led to ratings being too cyclical, too reliant on the general market mood rather than on fundamentals – regardless of whether market mood is too optimistic or too pessimistic”.

In a letter published in March 2011 by The Economist, David Beers, Standard & Poor’s (at that time) global head of sovereign ratings, defended the record of the agencies. He noted that credit ratings “provide a robust ranking of the risk of sovereign default” and “are independent opinions of creditworthiness based on fundamental analysis and therefore should be expected to change as credit risk evolves over the cycle”.

Previous research by Manfred Gärtner and Björn Griesbach has made the case that “sovereign ratings, their meaning and their underlying procedures are rather opaque”. They also went on to argue that “the set of relevant fundamental variables is an open one, and the interpretation of ever evolving political institutions and processes in unprecedented environments are a dime a dozen”.

Their arguments were not left unchallenged. Moritz Kraemer, Global Chief Rating Officer of Standard & Poor’s, has dismissed Gärtner and Griesbach’s arguments as being “simply wrong”. He noted, among other things, that S&P’s sovereign rating decisions are accompanied by comprehensive published rationales and, often, press releases that explain their reasoning and approach. Kraemer also pointed out that S&P explain on their website how they arrive at their ratings and how these ratings perform over time, which makes their publications as transparent and complete as possible.

Rating agencies during the Eurozone crisis

In a new research paper, we shed some new light on how credit rating agencies have operated over the recent Eurozone crisis. Our findings are summarised as follows. First, regulatory quality and competitiveness have a strong impact on the credit profile of low rated Eurozone countries whereas GDP per capita is a major driver of the credit profile of high rated countries. In other words, the high level of GDP per capita provides a ‘safety net’ safeguarding (to some extent) against downgrades in the case of high rated countries.

Second, significant reductions in the debt-to-GDP ratio trigger a sovereign credit upgrade of only one notch per annum. This is extremely relevant for Greece as it suggests that short-term or medium-term debt relief consistently pursued by Greek policymakers will do very little in lifting Greece’s credit profile.

But why is this the case? Policymakers have arguably been rather slow in putting together a workable plan dealing with the Eurozone crisis as planning generally requires parliamentary approval from all member states. In addition, the major institutions (nicknamed the ‘Troika’ of the International Monetary Fund, the European Commission and the European Central Bank) have not always agreed on how to deal with issues of the crisis therefore fuelling policy uncertainty in the Euro area. Indeed, the Eurozone’s institutional infrastructure was not prepared to deal with the crisis. This is exactly what economic policy uncertainty captures and the Eurozone’s periphery has indeed felt this very impact much stronger than everybody else.

Fourth, economic policy uncertainty in the Euro area has reduced Greece’s credit rating by some 3 notches at the height of the Eurozone crisis in 2011 and in 2012; the impact of uncertainty has been substantial but somewhat less severe for the Eurozone’s remaining periphery (that is, Ireland, Italy, Portugal, Spain and Cyprus). In other words, our work goes some way towards responding to the criticism of Barroso and other policymakers as it reveals the pivotal role that economic policy uncertainty in the Euro area has played in downgrading the credit profile of the Eurozone’s periphery.

All in all, our work finds that a combination of an increase in competitiveness and accelerating structural reforms offer the best way forward for credit rating upgrades in the Eurozone area. These sovereign upgrades will then feed into lower borrowing costs and stimulate investments therefore enhancing the Eurozone’s growth in a sustainable manner.

Making this point is perhaps obvious but far from trivial. Indeed, economic analysts are currently preparing for the possibility of Quantitative Easing tapering in the Eurozone area. To the extent that this happens, borrowing costs in the Eurozone’s periphery are more likely than not to rise again. Our work suggests that the best way to safeguard against a rise in borrowing costs is through an improvement in competitiveness, structural reforms and economic policy clarity instead of uncertainty.

The adverse impact of policy uncertainty on credit ratings also offers a stark reminder to Britain’s policymakers. As Theresa May triggers the infamous Article 50 to kick off the Brexit negotiations, economic policy clarity (especially in terms of the future trade relationship between Britain and the EU and the working rights of EU citizens in Britain) needs to be prioritised. This will safeguard against downgrading Britain’s credit profile and keep a check on Britain’s future borrowing costs.

Costas Milas is Professor of Finance at the Management School, University of Liverpool. He holds an MSc and a PhD degree from the University of Warwick. He pursues academic research on monetary policy behaviour in the UK and Eurozone economies. He is a Senior Fellow in the Rimini Centre of Economics Analysis. He has published more than 50 articles in refereed journals.