The Limits of the Market: The Pendulum between Government and Market – Book Review

The Limits of the Market: The Pendulum between Government and Market – Book Review

The Limits of the Market: The Pendulum between Government and Market. Paul de Grauwe. Oxford University Press. 2017. 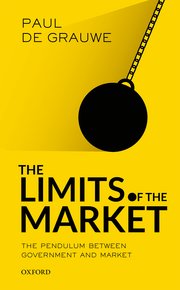 Perhaps it still needs to be said, but all states’ governments balance off the practice of government and the use of markets as allocation mechanisms. Indeed, we might also confirm that we appreciate that markets are constituted by law and, as such, there is no such thing as the ‘free market’: all markets are ‘constrained’ by laws of property, contract and wider social regulations. Thus, politics is all about managing the balance between market and government, recognising that all possible nodal points are a mixture of the two. Paul de Grauwe starts his new book, The Limits of the Market: The Pendulum between Government and Market, with a short synthetic history that seems intended to demonstrate this point, and by doing so wants to tell us something about his desired audience: not the academic adepts with a critical command of economic history, but some other folk.

But the question is: who? The chapters breezily tackle all sorts of potentially interesting issues from behavioural economics to public goods, from the difficulty of policy responses to global warming to the role of technology in development. However, these discussions are conducted in a summary form that would seem to suggest that you (the reader) are already familiar with them, rather than requiring any detailed exposition of the intricacies of these relatively complicated issues. On one level, therefore, this short book could almost be an executive summary for a much bigger work, or perhaps a guide to de Grauwe’s other research in identifying themes that he explores elsewhere. Or maybe, given the author’s clear command of the appropriate literature for the issues he raises – one chapter glosses Thomas Piketty’s work on inequality – this might be the literature review for a longer future piece of analysis. Then again, given its structure of short assertive chapters, perhaps de Grauwe has been making a series of public speaking interventions that are reported here  –  for instance, there is a whole chapter on the Euro as ‘a threat to the market system’. As you can see, I had some difficulty figuring out what this book is intended to do.

Clearly, the central argument is that the relationship between, on the one hand, the extent that society is directly governed by the actions of the state, and on the other, how much of the social realm is conducted via the market, is volatile and patterned by swings (of a pendulum) between the two alternatives. At times, de Grauwe seeks to link these political oscillations to Daniel Kahneman’s distinction between humans’ System I and System II internal thought patterns: System I is intuitive, while II is rational. At various points, he also reflects on other theorists, most notably Karl Marx and Karl Polanyi, and it is the latter that seems to lurk behind much of the discussion, even if there is only a short gloss of his work in Chapter Ten.

Polanyi was concerned with the socially destructive myth of the self-regulating market and tracked the social responses to re-embedding markets within socially attendant forms of regulation: the political process by which this happened he christened the ‘double movement’. de Grauwe’s chosen metaphor of the pendulum might suggest that this process of balancing the practices of markets with the socially embedding regulatory practices of government indicates a lack of interest in agency: the pendulum looks like a mechanical and non-social driver of political behaviour. While he is keen at a number of points to offer a clear account of the government as a policy-making actor, and thus able to manage the pendulum’s swings, at other times there is an economistic view of how material changes shift the agenda of possibility between market and government.

Nevertheless, at the end of the book, de Grauwe offers a set of reforms including a drive to reduce inequality; a move to a more environmentally sustainable form of capitalism; a reinvigoration of democracy; and the hard work of promoting international cooperation. On the final page this leads him to suggest we need to accept Albert Camus’s depiction of our attempts to deal with the absurdities of life as like the myth of Sisyphus: doomed not so much to failure as to never-ending struggle. De Grauwe therefore concludes that while recognising our political work can never be done, we need to continue to work to reform capitalism, to move the pendulum towards a workable balance between government and market.

For a social democrat or indeed anyone who is not a market fundamentalist, there is little one might vehemently disagree with in this book. The mystery remains, however: who is the intended audience? As I read The Limits of the Market, I was reminded of Umberto Eco’s discussion of publishing in Foucault’s Pendulum (see what I have done there?) and the strange output of that fictional publisher. To be clear, this is not to say this is badly written and I certainly do not want to disparage the author, who seems to be broadly correct in the conclusions he offers. It is just that this book is not one thing or another. It is not an accessible handbook for the non-adept as it presumes far too much knowledge of the various issues in offering lightly filled-in sketches of its key points; but equally, this very lightness means that the interesting arguments are neither as fully developed nor as nuanced as an academic audience might require. Thus, like a chimera, each time I reached out to grasp the character of the argument, somehow it slipped out of my hands; perhaps other readers will see the point in a way that I have been unable to, and if so, perhaps de Grauwe is speaking to an audience that I have (due to my own myopia) been unable to imagine.